We love Abi Wright. After losing 14 stone (yep 14!) through hard work, healthy eating and a big old dollop of exercise, she’s turned her life around and is now a bona fide running addict. This month she tackled her first half marathon and now she’s only gone and signed up for the Virgin London Marathon! She wants to show others who are struggling to exercise or eat well that it is possible and surgery or quick fixes are not always the answer. Read on and be inspired! 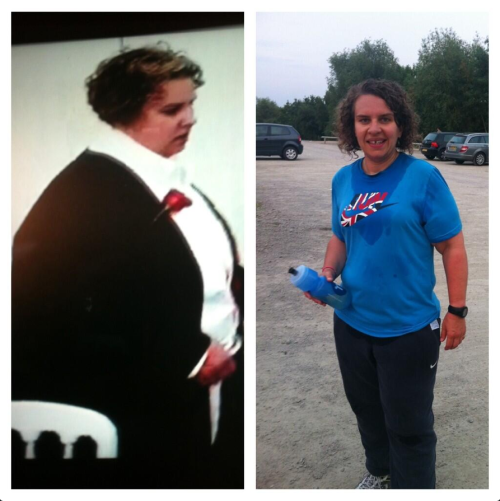 It’s four in the morning and Eye of the Tiger is blaring out across the room. Three years ago, this would have been the signal that it was time to go home after another night on the vodka and cokes. But things have changed for Abi Wright.

The tune from Rocky is actually her morning alarm (good choice Abs), waking her up for the biggest challenge in her fitness journey to date. The Royal Parks Foundation Half Marathon, and her first attempt at the 13.1-mile distance.

‘Three years ago I was 25 and a half stone,’ says Abi, who has since lost a ridiculous amount of weight – 14 stone to be precise. ‘I couldn’t walk up stairs without feeling out of breath let alone run a half marathon. If you’d told me then what I’d be doing now, I would have laughed in your face. I would have said ‘but how?’

Three years ago I was 25 and a half stone. I couldn’t walk up stairs without feeling out of breath let alone run a half marathon

In answer to that question, ‘but how?’ Abi has achieved everything she has through eating well, exercising regularly, hard work, grit and determination. And she hopes her success will inspire others. ‘I want to show people you don’t need a gastric band to lose weight,’ she says. ‘Yes it’s hard, you will need the support of your family and friends, and you have to really want to do it. But you can do it, and you’ll feel so much better for it.’

Growing up alongside her brother and sister in Rugby, Abi was an active child who enjoyed sports at school. She wasn’t overweight, no one in her family was, but she did like food. ‘I didn’t really start to put on weight till I was around 15 or 16,’ she says. ‘I suppose when you’re younger your parents control what you eat but as I got older and had more choice over what, and how much, I ate I started to put on weight. 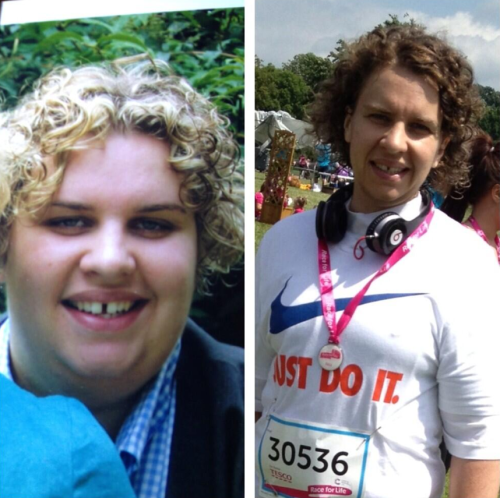 ‘My weight gain was gradual so I didn’t notice just how much I was putting on at first. Yes, my jeans would get tighter but instead of doing something about it I’d just buy the next size up. Things got worse when I moved to Surrey to study for a business HND. As well as eating I was drinking most nights and generally living an unhealthy student lifestyle complete with takeaways, fast food and ready meals. After college I started a career as a medical sales rep. Travelling to appointments in the car and eating at service stations or grabbing something on the move wasn’t ideal. I found myself snacking on grab bag crisps and got a bit addicted to Wispa Golds.

The bigger I got the more depressed I became. I was deeply sad, I hated what I was doing to myself but it’s a vicious circle

‘The bigger I got the more depressed I became. I was deeply sad, I hated what I was doing to myself but it’s a vicious circle. The more down I got, the more I ate to try and cheer myself up. No one could talk to me about it. If my parents mentioned anything about my weight I’d fly off the handle. I tried Weight Watchers and other diets but I only lasted five minutes. Dieting is hard if you’ve just got a stone or two to lose but when you’ve got 15 it’s a massive task to get your head around. You need to be ready to give it your all. 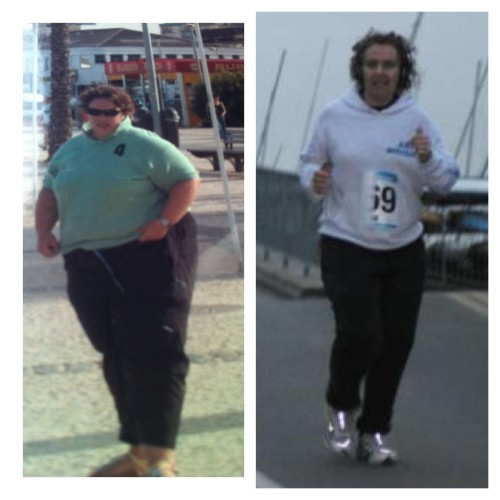 ‘One day, as I was walking with my young niece in town, something clicked. I realised I didn’t want to be the type of auntie who was too big to play with my nieces and nephews. I didn’t want them to be embarrassed if I went to pick them up at the school gates or ask me why I was the size I was. I knew my bmi was dangerous and if I didn’t do something about it my life would be shortened.

‘My sister and her friends had started an exercise group they called the Kick-Ass club and I decided to join. It was a way of encouraging each other to exercise and lose weight. And it worked. We allocated points for the amount of exercise we did and nominated someone as ‘kick ass champion’ each week. I started gradually, walking and cycling by the reservoir near my house and I joined a gym, although I felt some of the trainers looked down on me because of my size so I preferred to exercise at home. The first stone came off really quickly and as I started to lose weight and exercise I began to look more at my diet.

I hadn’t been able to run for years. I dreaded the treadmill at the gym but I knew the thing I found the hardest was the thing that was going to do me the most good

A friend who works in the fitness industry gave me some advice about eating more protein, switching to complex carbs and using food as fuel. I set myself small manageable weight loss goals, half a stone at a time. Instead of takeaways, sandwiches and fatty snacks I was eating porridge and fruit, chicken and salad, steak and roast veg. I even invested in a refrigerated glove compartment – yes, they exist! – so I could take my lunch with me in the car and have healthy snacks like hummus and carrot batons when I was working. I’m not going to say it was always easy, I found cutting down on alcohol particularly tough, but I knew if I wanted quicker results I had to be strict with myself.’ 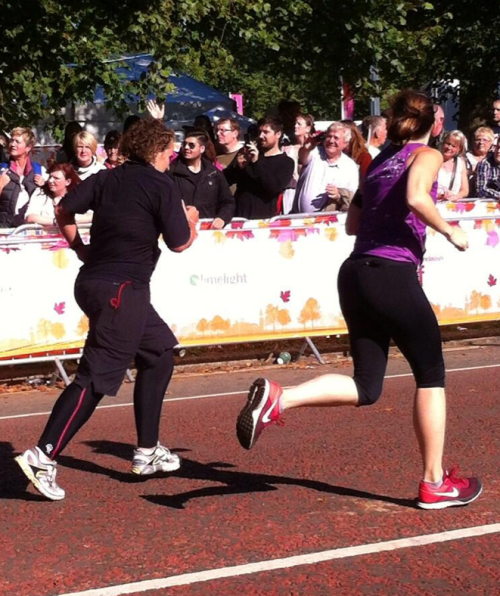 While the Kick-Ass club eventually fizzled out, Abi’s enthusiasm for exercise and her new healthy lifestyle didn’t. But there was still one thing she wanted to master. Running. ‘I hadn’t been able to run for years. I dreaded the treadmill at the gym but I knew the thing I found the hardest was the thing that was going to do me the most good. So I kept practicing. Running for a few seconds walking for a few seconds, and building it up each time until eventually, in May 2012, I ran my first mile and a half without stopping. I was so pleased I phoned my sister and just cried down the phone.’

Once Abi started running there was no stopping her. Persuaded by her cousin she found herself running a 5km charity race organised by The Air Ambulance Service. ‘There was an evil hill, it hurt and I thought I was going to die but it was the positive boost I needed to focus my training,’ she says.

She then completed the Nike We Own the Night 10k, (err, persuaded by us) which made her feel ‘sick but wicked’, a duathlon at Silverstone Race Track, and this month she ran the aforementioned Royal Parks Foundation Half marathon for Scope – the UK disability charity.

My parents were in the crowd supporting and when I saw them at mile 9, Mum was in tears shouting ‘I’m so proud of you’

‘I was so nervous when we were waiting at the start my heart rate monitor was off the scale. But I was nervous excited. I knew I’d do it. So many people had helped me get to that point – those who had sponsored me, run with me, offered advice, support and motivation in person and on Twitter – that I wasn’t going to let them down. Even if I had to walk I knew I would cross that line.’

And cross the line she did. And she loved it. ‘The crowd support was amazing. I had music with me but kept taking my headphones out to soak up the cheers and atmosphere. I was running with my old college friend Kate and I remember looking at her and thinking, “this is absolutely mental!” A few years ago the only thing we’d have been running was a tab at the local bar.

‘My parents were in the crowd supporting and when I saw them at mile 9, Mum was in tears shouting ‘I’m so proud of you. After that, time just flew by. One minute we were at mile 11 and then suddenly there was a sign saying 800m to go! I knew I’d done it then and I dug in for a sprint finish. My friend filmed it though and it doesn’t look quite as speedy as I imagined in my head!

The marathon is the ultimate. 26.2 miles! It’s such a massive challenge for me, but I’m ready for it. I’m in the zone.

‘Crossing the line and getting that medal was such a proud moment. I had tears in my eyes as I turned to Kate and said, “We’ve just run a half marathon!” I couldn’t quite believe it. And I was so pleased with my time – 2:50, way under my 3-hour target.

‘That evening I celebrated with a Sunday roast and a big glass of wine with my family and friends. I’d already planned what I was going to wear, hoody, shorts and flip-flops. When I was bigger there’s no way I’d ever have worn shorts, now I wear them at every opportunity. I also posed for loads of photos, again something I used to hate. Oh, and I signed up for the Virgin London Marathon too! Running for The Air Ambulance Service. The marathon is the ultimate. 26.2 miles! It’s such a massive challenge for me, something I never thought I would achieve. I know I need to build up my training and I know there’s a lot of hard work and tough times ahead, but I’m ready for it. I’m in the zone and I know I can do it!’ 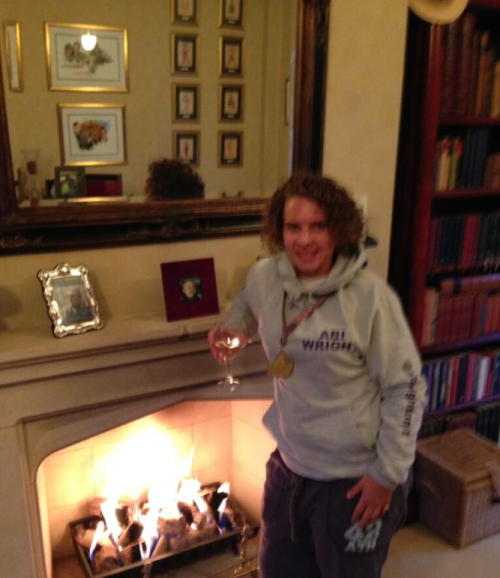 Get in touch with Abi

‘Running, exercise and healthy eating haven’t just changed my life, they’ve given me my life back. The other day I tried to piggy back a friend who weighs 14 stone – that’s the same amount as I was carrying around every day – just going up stairs was like climbing a mountain. I’ve managed to lose weight without surgery or diet pills and I want others to realise it’s possible too. Advice, motivation and support on Twitter have really helped me achieve my goals and I’d love to do the same for others in return. If you have any questions, want to follow my fitness journey or find out how my marathon training’s going, follow me on Twitter @abiwrightonit

Got an inspiring fitness story? Email charlotte@lungesandlycra.co.uk if you fancy appearing on L&L

We’ve tried training without music. It was painful. It’s why we spend hours trying to create our perfect workout playlist – tunes to help us bring our A-game and…