You’re chilling out with your mates having a picnic in the park, perhaps a couple of tinnies, when someone suggests a game of volleyball. You stand up timidly and then, wham, you OWN that court with these stealth moves from Team GB’s rather handsome male beach volleyball players. Our pleasure.

Our mate Cazza B (or Caroline Bishop as she’s more commonly known) went along to meet GB beach volleyball players Jake Sheaf and Chris Gregory last week to find out just how this volleyball lark is done. Fancy having a bash? Free volleyball events are taking place across the UK from 25-27 May as part of the Go Spike Weekend, find one in your local area here.

You know that thing when the sand is so hot you have to run to the sea to stop your feet burning? This isn’t it. It’s a typical British spring day in Crystal Palace (seven degrees and raining) and I’m standing on a beach volleyball court where the sand is so cold my bare feet are turning numb. Bondi Beach this ain’t. 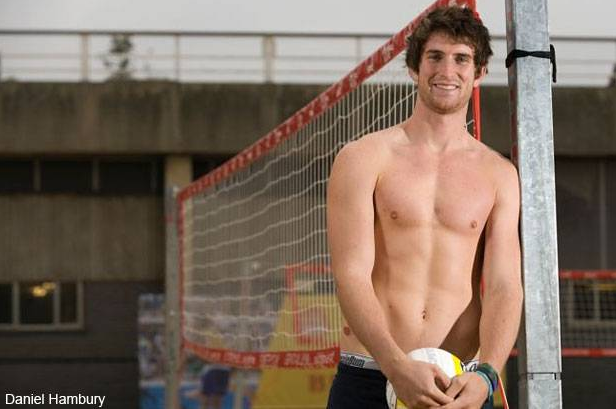 Gratuitous torso shot of Jake. We’ve all seen what the girls wear so it’s only fair

According to GB beach volleyball player Chris Gregory, 95% of the people who play the sport in the UK aren’t originally from here. Unlike us, they obviously grew up in a climate where hanging out on the beach in your swimmers isn’t relegated to a once-a-year experience (with a brolly and jumper on hand just in case).

Look how tall Chris is!

Us Brits are in the minority – Chris’s GB teammate Jake Sheaf tells me volleyball is the second most popular sport in the world. To help us see what we’re missing and encourage more of us to take up the sport, Chris and Jake are involved in Volleyball England’s Go Spike Big Weekend on 25-27 May. Promoting grassroots volleyball in all four forms – indoor, outdoor, beach and sitting – the campaign invites everyone to give the sport a go by joining one of 33 events held by volleyball clubs around the country.

So in advance of the Go Spike weekend I’ve joined Chris and Jake at their training base at Crystal Palace Sports Centre to try out beach volleyball for myself. 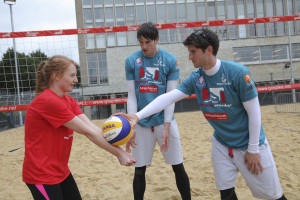 Chris starts by showing me the basic volleyball move – the dig. Putting my right hand into my left, thumbs together, I  twist my arms outwards slightly to create a ‘platform’ on my forearms. This area forms the bat you use to bounce the ball off when you receive a pass. You and your teammate (there are only two on a team in beach volleyball) can have up to three touches on the ball before it must go over the net, and the dig is usually the first touch. The red marks on my forearms at the end of the session prove I’m doing it right. 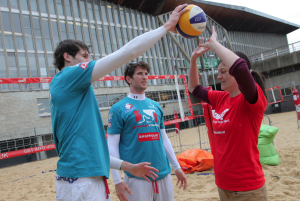 Probably easier if you open your eyes Caroline

Second touch is usually the set, in which the player sets up the spike for their teammate. Jake and Chris demonstrate how to hold your hands splayed above your head making  a diamond shape in the middle. Bring them slightly further apart, “as though you’re caressing the ball,” says Jake. As you receive the ball bend your legs and then straighten again as you push it up in the air.

With the ball set by your teammate, you’re ready to spike it over the net in a winning shot. I quickly realise that height is a distinct advantage in this one. I’m 6ft, but I feel short next to 6ft 10in Chris, who tells me he got into volleyball by joining UK Sport’s ‘Sporting Giants’ programme which aimed to find tall athletes in advance of London 2012. He deftly spikes the ball to the sand with ease, while mine goes sailing into the net. Must try harder. 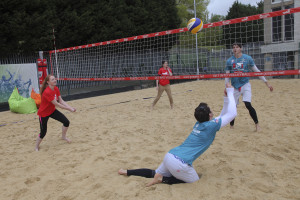 Our money’s on the blues

After learning the moves – including a simple underhand serve off the flat bit of your fist – we’re ready for a game. It’s hard at first to control the ball on the dig, and it takes a while to master which shot to use when, but once I’ve got the hang of it I’m not too shabby – I even get a couple of spikes over. After two games it’s one a-piece and I’m high-fiving Jake like I’m playing for Great Britain on Horse Guards Parade. It’s still raining, but I’m pretty warm after running around the court, and I’d happily carry on. It may not be Bondi, but it turns out beach volleyball is a laugh in all weathers. Just bring some warm socks to put on afterwards.

To find out about Go Spike Big Weekend events near you visit gospike.net or follow @Go_Spike.

Chris and Jake will be hosting a Go Spike Open at Crystal Palace Beach Volleyball Club on 25-26 May. Details at cpbeachvolleyball.com

So the Daily Mail and Huffington Post are reporting that workout wear is creeping into our everyday wardrobes. Like duh, we’ve been wearing our…