A few weeks ago I headed up to Northern Bootcamp to escape London and give my fitness a kick up the arse in prep for Race to the King, our fast approaching 52 mile run across the South Downs. Here’s how I got on…

I headed up north to Berwick-upon-Tweed on Friday afternoon but the minute I stepped off the train I realised I’d made a terrible mistake. I’d underestimated how much of a soft southerner I’ve become and not packed nearly enough clothes. Northumberland was absolutely baltic!

Luckily I was soon rescued from the cold by pocket-sized ultra-runner, triathlete, Ironman, Northern Bootcamp Trainer and all round hero Bruce. I could instantly tell he wasn’t your average PT… and I wasn’t wrong. Bruce had been an unfit, overweight, heavy drinker with a 60-a-day smoking habit, unable to run 100yrds before deciding to tackle Kilimanjaro and a 150 mile footrace across the desert. He then completely changed his career, qualified to become a personal trainer and triathlon coach and luckily for me ended up at Northern Bootcamp. Anyways you get the idea, before I’d even made it back to the camp I’d already realised I was in for a pretty good week. 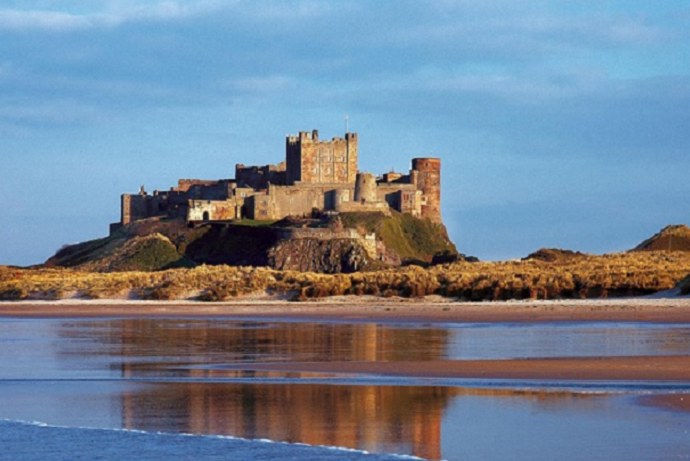 After what I imagine felt like an interrogation for poor Bruce, we arrived in Bamburgh, a lovely little village on the Northumberland coast which would be my training grounds for the next seven days. The scenery was amazing – the beach with Bamburgh Castle as our backdrop was my favourite training spot – and the accommodation was pretty swanky too.

As soon as I arrived we did weigh-ins and measurements before heading out for a gentle walk to shake out our legs ahead of a week of hard-core training. I used it to get to know a bit more about the campers and I also got to meet one of the other trainers Dave, a 6ft 5 ex-Marine. A complete contrast to Bruce but together they were the perfect duo. Dave was a Royal Navy PTI before being discharged because of injury and being told he would never play competitive sport again. He qualified in sports rehab and spent 15 months coaching himself fit before becoming a boot camp trainer. On first impressions he was definitely bad cop but by the end of the week the hard exterior started to crack! After a gentle stroll I was knackered so I hit the sack in anticipation of my first proper day in the Northern Bootcamp house.

There were a few late arrivals so it wasn’t until day two – our first proper day of boot camp – that we got to know everyone. About half of the campers on my trip had been before. It’s no surprise when you meet Caroline and Dan who own and run Northern Bootcamp. I was instantly won over by them, you’ll struggle to find two people more passionate about helping people to fall in love with exercise and the outdoors. They’re lovely – the sort of people you want training you but you’d also want to go to the pub with after. 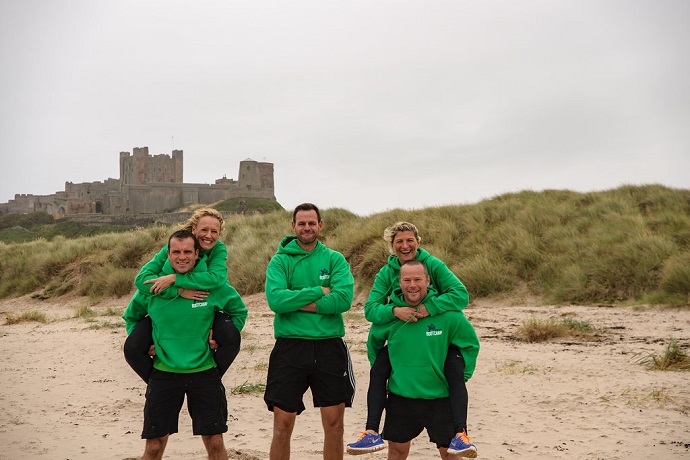 We headed out at 7am for fitness tests – press ups, sit-ups and squats, followed by a timed beach run. I’m not used to training on an empty stomach so the morning sessions were the ones I really struggled with. After an amazing run along Bamburgh beach I was happy to be heading back for breakfast!

The food at the camp was amazing, we had our own chef called Annie. My favourites from the week were the homemade granola with banana milk, date flapjack and the sweet potato fish pie. My name is already on the list for a ‘Bootcamp Kitchen’ recipe book which comes out later this year. 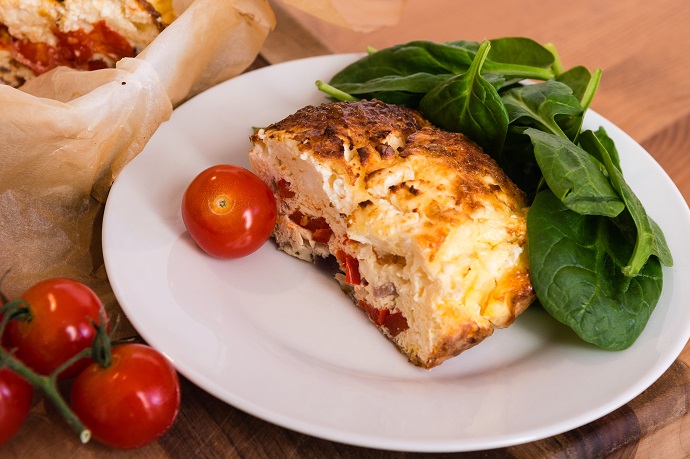 After breakfast, it was a tabata boxing session with Dave (20 seconds giving it 100%, followed by 10 seconds of rest). I managed to nearly take out my boxing partner Louise with a solid right hook so in stepped Dave. Unfortunately this meant there was no place to hide and by the end of my round my shoulders were on fire! After boxing we had time for a quick snack and then we were on to the next session, outdoor circuits.

After circuits we had another feeding – we ate every two to three hours but because of all the training I was still constantly starving. We then headed out in teams for a scavenger hunt which involved hiking and biking our way round the local area.

After dinner, Bruce did a foam rolling session. He’s a sports masseuse and bio-mechanics coach so it was a great chance to tap him up for recovery and rehab tips. Then we chilled on the sofas and spent a bit more time getting to know one another. It was a really eclectic mix of people of different ages, with different backgrounds and different goals. From people who just wanted a bit of time out, to people who wanted a fitness boost, to people who were returning from injury. By 8pm I was tucked in bed in my jammies!

We kicked off day three with some cardio on the beach – more drills and some running. Dan talked us through warm-up drills and mobility exercises. Dan and Caz are big on making sure you have the knowledge to go away and do it for yourself so I picked up loads of tips through the week which I’ve incorporated into my training.

After breakfast we did some more outdoor circuits before heading to the gym for indoor circuits with Bruce. This time it was a mix of rowing, tyre flips, ball slams, the prowler, box jumps, battle ropes and crab walks. We finished off the day with a hike and abseiling. Dan is possibly the biggest outdoor obsessive I know and he’s passionate about making people fall in love with it too so the schedule includes as many opportunities as possible to try different activities. He also runs an outdoor activity company called Northern Outdoor (www.northernoutdoor.co.uk) which is definitely worth checking out. 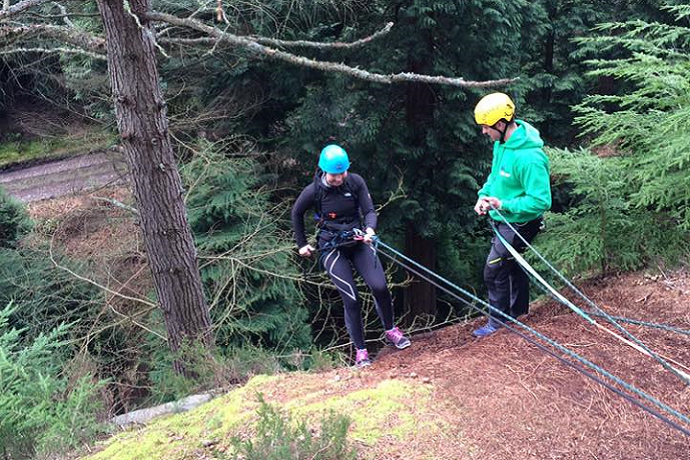 By the time we had dinner I was already set for bed but Dan managed to persuade us to do one final core session – more tabata!

We piled into the mini-bus and headed down to the beach but this time with Caroline aka the pocket-rocket. She may be small and smiley but don’t let that deceive you – her sessions are brutal! True to form she kicked off day four with vomit inducing hill repeats on the sand dunes.

We then headed back for breakfast, another HIIT session, more food and then an endurance circuit with Dave – ten rounds of weights and plyometrics with hill sprints for recovery!

After a full on morning the afternoon was a little more chilled – Dan took us up to Berwick-upon-Tweed and we headed out in the canoes. 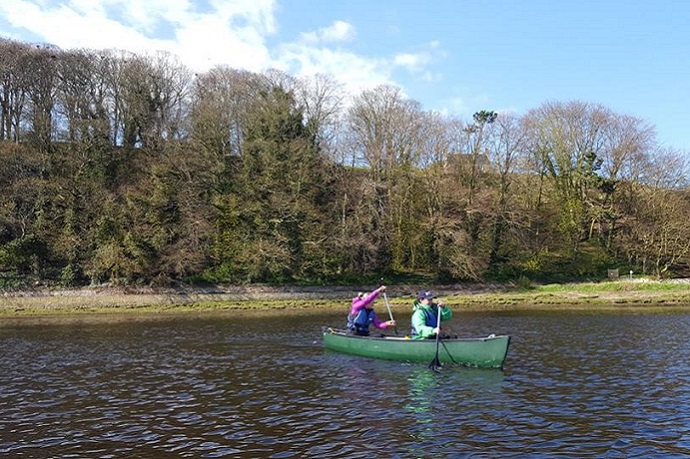 Day five in the Northern Bootcamp house and it was time for more hill sprints. Breakfast was followed by some boxing and an obstacle course in the grounds of the house – cargo net crawls, jumping over bails, jumping through tyres, you get the idea. Then after lunch the sun was shining so we hit the beach for a bit of body boarding – we were kitted out in wet suits and the sun was shining but after about an hour in sea I’d lost all feeling in my toes so opted for some sun bathing! 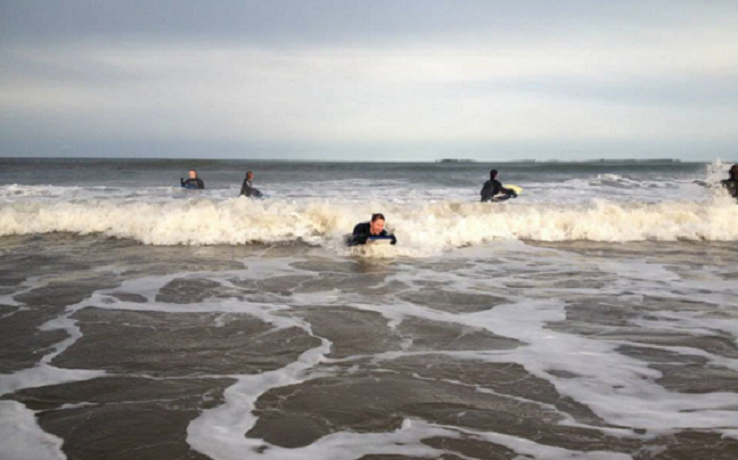 Day six and seven included a beautiful coastal walk, kettlebells, heavy weights session and more circuits. At the end of day seven we split into groups – I headed out for a cycle with Dave and one of the girls and we got to explore a bit more of the area. Day seven was topped off perfectly with my favourite dinner of the week, sweet potato fish pie and black bean chocolate brownie!

On our final day we wrapped up the week with a jog along the beach and weigh ins. Over the week I lost a whopping 4kg but more importantly I felt brand new! The perfect time out from London life and the perfect boost to get me race ready.

Finally, a really big thank you to Caroline and Dan for putting up with me for the week, to Bruce for being a proper inspiration and for agreeing to keep me company during the Thames 50 in September, to Dave for getting me excited about my training again, to Annie for keeping me motivated with some amazing food, to Neil for being my partner in crime (including sneaking me out to the pub to watch the football – proof that you can have a few sneaky gin and tonics and lose weight) and to all my other campers for being awesome company – you know who you are!

There was thunder, there were gales, torrential rain and flooding but there were also 86 miles to crack through. So we did. And we’ve…