At school, when I’d finished my GCSEs and was no longer obliged to do PE any more, I embraced my freedom to never have to engage in team sports wholeheartedly. I liked exercise, just not doing it in between a set of white lines with a bunch of other people.

I hated the stupid team vests, the balls (all of them), the rules, and most of all the pressure of my cock-ups affecting the game’s outcome. As a naturally non-competitive person with limited coordination, the experience of being shouted at to run for a ball I didn’t want, to then being shouted at for doing the wrong thing if I managed to get it, was not a welcome one.

In the 11-odd years since, I’d managed to get away with maybe three games of rounders and that’s about it. So, when a couple of months ago I found myself voluntarily walking towards a concrete netball court, no one was more surprised than me.

I’d heard about the Back To Netball (http://www.englandnetball.co.uk/my-game/back-to-netball) scheme after reading an article on The Debrief – an England-wide initiative aiming to get women over the age of 18 back into the sport – even if you’ve forgotten all the rules and how to catch a ball (like me), with weekly, laid-back sessions and specially trained coaches.

The ‘no pressure’ bit appealed, so I found a group I get to after work, and sent across an email to the lovely coach, Emma, to see if I could give it a go some time, and what I could expect. She told me it didn’t matter at all what my skill level was, and that the next session – the following night – already had a couple of other newbies going along, so it would be the perfect opportunity to join in. Shit. Now I’d actually have to do it.

Walking over to the group – 10 ladies whose ages range between 20 to mid fifties, I felt welcome at once. The sessions tend to consist of the first 30 minutes spent warming up – ie. playing games you might remember from school like tag, races etc – and working on skills, be it passing, learning how to dodge and shooting. The last half is where those dreaded bibs come out again and we play a game. 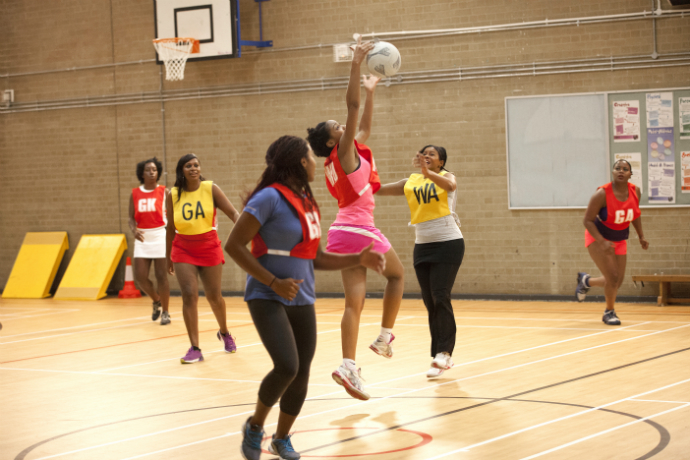 At this stage, after only a few weeks getting back into it, I think my game play style would be best described as ‘enthusiastic with limited effectiveness’, but the difference is that any time anyone makes an impressive catch, interception or shot, you’re praised – both by our coach and the fellow members on the team – even if they’re supposed to be marking you.

It perhaps lacks the competitive aggression some might crave (an ‘actual’ team was training on the court next to us a few weeks ago seemed instead to be spurred on by their terrifying coach’s cry of “Let’s see who can play the least shit this time”), but don’t let you make that think it’s slow paced. Compared to doing intervals at the gym, or sweating my way through a spin class, I’ve never, truly sprinted so much in years as when I’m running after that ball. Each week I can feel new muscles have been used, and I can feel the benefit of this kind of training when I’ve been out running since. The best bit is, it doesn’t even register as a workout – there’s no slogging, it’s just a fun way to spend an hour. And when you leave, having spent the time running, laughing and getting encourages, you’re left with a high you’ll never be able to find on a treadmill.

I think it’s safe to say I’ve been convinced.