If you find it tough to power through endless laps in the swimming pool – most people will admit swimming up and down the same lane while trying to avoid getting someone else’s foot in your face can get boring very quickly – aquAllure has a solution for you; aqua cycling. You’ll still be in the pool, but instead of swimming in it, you’ll be cycling.

If it sounds weird, that’s kind of because it is. We went along to the newly launched class at The Quad Health Club & Spa in Dockland’s Crowne Plaza hotel, which will be running every Tuesday and Friday at 7pm, sponsored by phD Woman. You change into your swim stuff, head down to the pool, and there’ll be a row of bikes waiting for you at the water’s edge. They’ve been specially designed for use in the water, with pool slider-like paddles you can slip your feet into. Once you’ve adjusted your saddle and handlebars for your height, they’ll be plopped into the pool, where you follow.

The rest is very much like a on-land spin class, as an instructor will guide you through the moves and (hopefully) play some banging tunes – we were treated to some <Livin’ La Vida Loca>, which was a pretty special moment. One thing you’ll notice pretty quickly is that cycling in water is much more difficult than air; you automatically have a fairly high level of resistance at all times, which means there’s no way of wimping out and giving yourself an easy ride. This is particularly true when trying to sprint – it’s really hard work to get your speed up, and even once you have there’s none of the normal momentum to keep you going, so you have to push yourself a lot harder than usual. 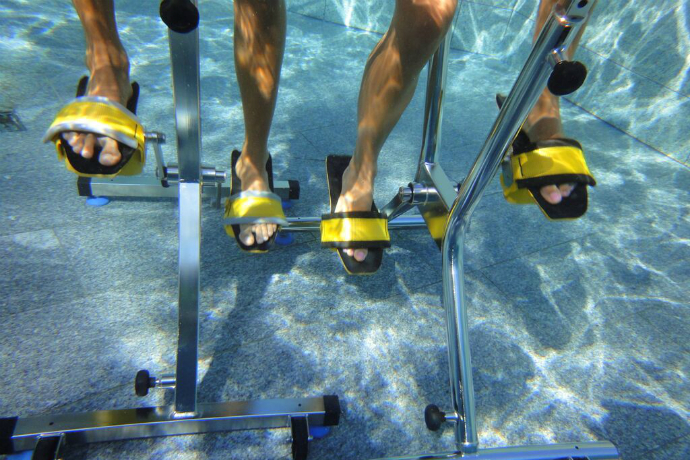 The great thing about doing this under water is that you can work hard with much less stress on your joints, and it also allows for a wider range of motion – both of which are particularly good if you’re trying to keep fit while recovering from an injury. It also means you’re likely to ache less the next day, as muscle fibers will have taken less of a battering when they don’t have the full force of gravity to grapple with.

As well as working your legs, there’s also the opportunity to condition your arms and core, again using the natural resistance of the water. You’ll soon find even trying to move your arms back and forth at speed is a real struggle, and when you’re on a break from the high intensity sprints, the instructor will get you to do a range of arm movements – including jumping off the bike to do tricep dips on the frame – to target all of the muscle groups. Again, this is great because the water gives you instant resistance, yet none of the jarring movements you get when using dumbbells. What’s more – being in the water means you won’t get sweat patches, and it’s really easy to cool off. Just don’t drink it…