Sometimes you just need to ditch the watch and have a blast. At Gothenburg half marathon I added a whopping 16 minutes to my PB but it was one of my favourite runs ever.

Turning up at Royal Parks half marathon and running solo with no one knowing I’d entered. Going watch-less at Bookham 10k, bowling down the hills and splashing through every puddle. Getting up at the crack of dawn during a long weekend in Paris and running through the frosty Tuileries garden with no one else around…

If I think about some of my favourite runs they haven’t been the ones where I’ve run the fastest times or smashed my PB (although I’ll always hold a candle for Brighton marathon), they’re the ones where there was no time pressure or competition, I just went out and ran for the sheer bloody fun of it.

Racing for a time has its place no doubt and a PB is hugely satisfying, but sometimes we get too hung up on going faster every run. Sometimes we’re tired, sometimes we’re not as fit as we’d like to be, and sometimes we don’t want to go out and taste blood or swallow vomit on the finish line. Everything has its place and if you’re feeling a bit jaded with running there’s no better medicine than going along to a race and just having a party. 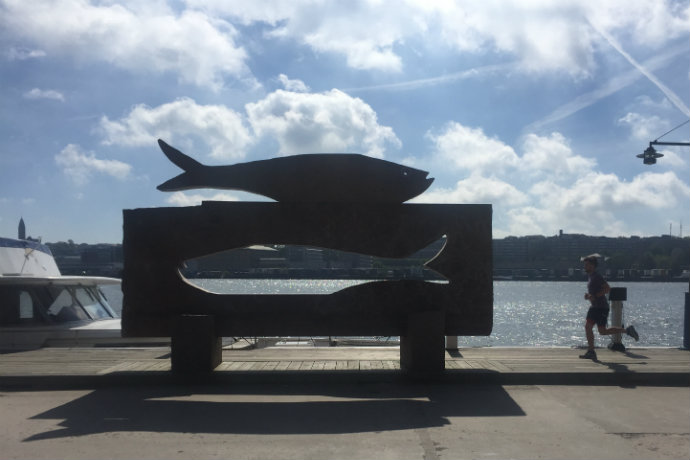 Which is why, when Gore running wear invited me to the Gothenburg Half marathon (Götesborgsvarvet half marathon) a few weeks out from a marathon and slightly gammy of leg, my goal was just to have a bloody ace one. I knew I wasn’t fit and if I’d tried to race my time would have been disappointing, so at first I considered giving it a miss.  But then I thought, sod it, I’ve never been to Sweden before, why would a few extra minutes on my race time stop me going? Run for good times not a good time.

And what did happen? Well, unsurprisingly no magical record-breaking run or sub 1.30 (that would require performance enhancing drugs), instead I got a beautiful tour of Sweden’s second city. If there’s a better way to see a new place than runsploring, I’ve yet to find it. It’s also really interesting to see how different countries approach running. And a Swedish race definitely has its quirks.

The world’s largest half marathon? 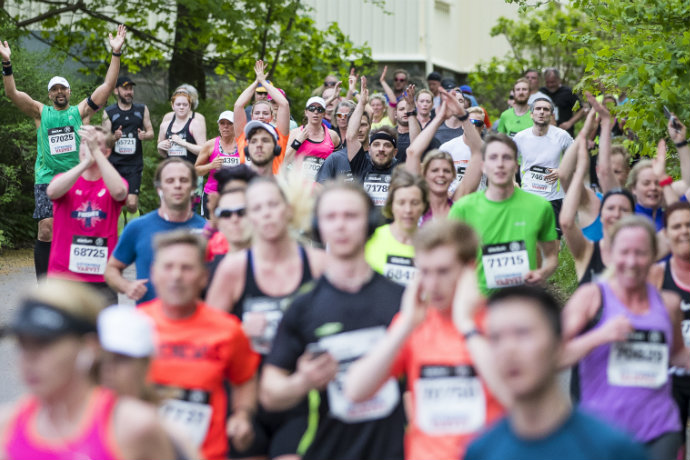 Before I went to Sweden, I would have sworn blind the Great North Run was the world’s biggest half – it says it on their website. But according to Gotesborg’s Varvet, I’d be wrong. They have a massive 65,000 entrants compared to GNR’s 57,000.  To be honest, the size isn’t really a selling point for me but it does give you an idea how many people are involved – it seems everyone in Gothenburg had some kind of connection to the race, whether they were running, supporting or playing music along the course in their garden it was a proper city-wide celebration. 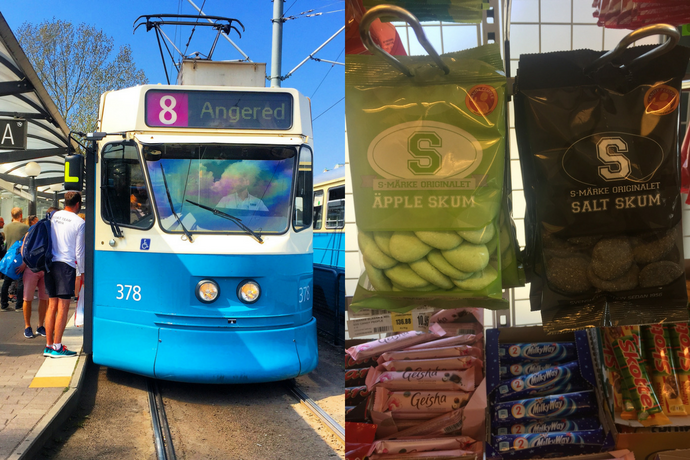 Unhappy trams and unappetising sweets, got to love Sweden

One thing you soon learn about Sweden is they’re very relaxed. The race started, weirdly, at 1pm with waves going every few minutes until 4pm. My start wave was at 2pm – bit of a strange time to factor in having your lunch. When we were travelling there at 11 they were still putting out the aid stations along the routes. As I said, relaxed. But it was all done in time and everything went without a hitch. The start was in a beautiful park where families and supporters were sitting around and having barbecues and picnics. It was all just so chill. I honestly think I love Sweden. 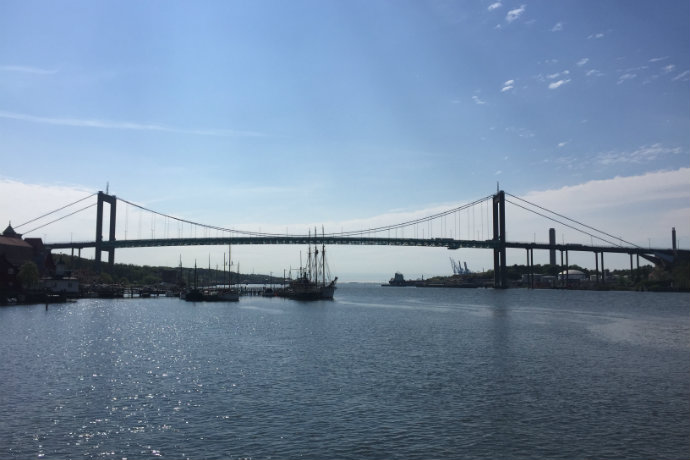 We ran over here. It was pretty windy

Varvet means ‘lap’ and you really do do a lap of the city, through parks, across huge bridges, past traditional houses, along the riverside, round the harbour, through the city centre, and up and down a surprising amount of inclines before finishing with a lap of a stadium in the park where you started. Sweden is a land of lakes and forests and on this weekend at least, sunshine. It really is a stunning place to run. 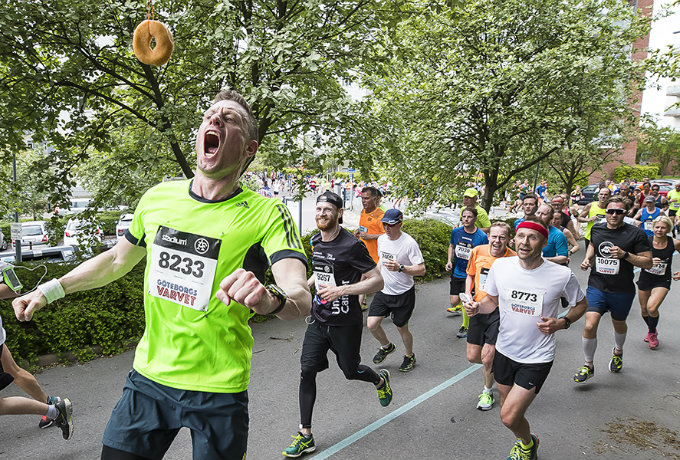 Gothenburg is also one of those cities where it’s easy to be active (take note, London). The race was run on road in places, but also on the wide cycle and walking/running paths that circumnavigate the town. When I say wide however, they’re wide for cycle paths. The course is narrow for the amount of people, which is one of the reasons the start is so staggered. Those who were in earlier waves didn’t have a problem but I did find the congestion an issue. When I’m running I tend to stick to a consistent pace but it soon became clear I could either get annoyed because I couldn’t pass people who were walking on the many pinch points, or I could just sack off worrying about it and have a chat with the other runners. I chose the latter. 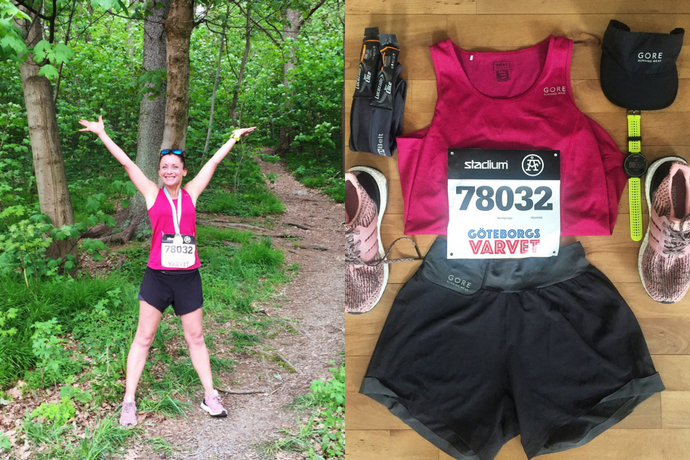 I liked seeing the traditional timber houses. I loved the fact so many people were out having barbecues in their gardens and throwing cheers in our direction, I liked the bands playing ‘interesting’ traditional music, I liked the fact they have a competition for students to design the medal. The absolute highlight for me though, was seeing the elites come in as we started. Pretty magical. Oh and having enough portaloos to go to the loo at least three times before the start was a winner. Worst bits – water in cups (impossible to drink on the move) and sponges (they love these in some countries and I don’t know why. They might cool people down but when they’re all over the road it’s a frigging nightmare). 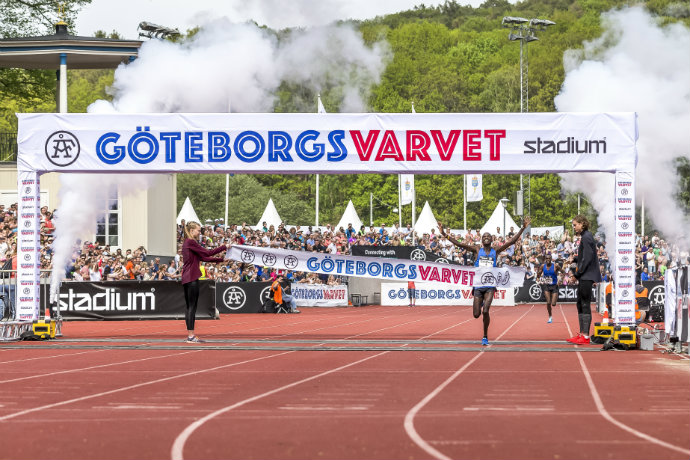 Geoffrey Yeogon, obvs it was seeing me that spurred him on to win

As with all of these things, although we got to see a lot of the city during the race, there just wasn’t enough time to see everything I wanted to once it had finished. I still want to check out all the woodland trails and spend some more time in the city centre, oh and go back to that great bar with boules pitches in the basement. Suppose I’m just going to have to go again next year. Oh, and I think I might continue my l0ve affair with Sweden and pay Stockholm marathon a visit too – although that starts at the equally strange time of 12. Maybe Swedes just love a lie in.

If you fancy signing up for Gothenburg next year, I will definitely join you. Details are here.

Ps. Massive thanks to the guys at Gore Running wear for the opportunity to run.

After volunteering with A Mile in Her Shoes over Christmas, Charlotte spoke to founder Nicola Miller to discover how the charity is helping homeless…