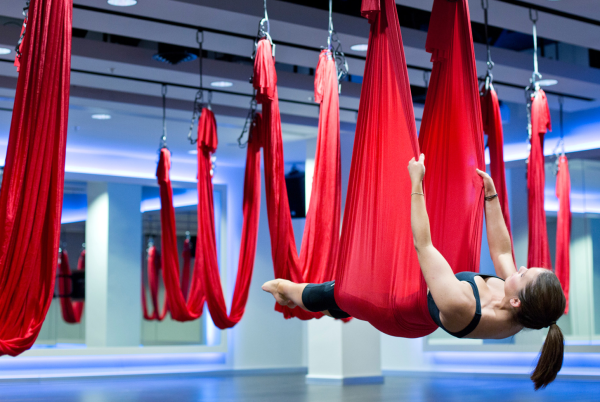 Sweaty, strengthening and acrobatic, AntiGravity Yoga is a much tougher workout than you may think. Apparently Gwyneth Paltrow is a fan but don’t let that put you off.

Where: Select Virgin Active clubs including 200 Aldersgate and Kensington

What they say: “Suspended above the floor, you’ll be free from gravity and able to improve your agility and increase your flexibility in ways you never thought possible.”

What we say: More ‘circus’ than traditional yoga, and requiring a lot more strength than you may imagine. We were worried this would be a bit ‘hen do activity’, the 2013 version of belly dancing but it’s actually pretty tough.

Not what I was expecting
Before I went along to AntiGravity Yoga, I was imagining a bit of gentle swinging in a hammock accompanied by stretching and twinkly music. Kind of like an advert for low-fat cream cheese.

This was not the case. Yes there were some lovely deep stretches, but generally it was more like trapeze than yoga with somersaults, shoulder stands and moves where you folded yourself up in hammock fabric and hung upside down like some kind of human cat’s cradle.

So what happens?
In one of fancy schmancy Virgin Active 200 Aldersgate’s studios, there are attachments on the ceiling where red hammocks are suspended before each AntiGravity class. There’s a 15-minute intro session, advisable for all beginners, where you’re given instruction to help you get into the hammock – trickier than it sounds as they’re made from a vast amount of material – and learn some of the basic moves, such as how to turn upside down(!). Don’t worry, there’s plenty of support and advice from the teacher throughout, in my case the rather lovely Esther.

This is certainly no gentle class, the hammock is used like a TRX to support your feet as you plank and tuck, pike, lunge and suspend yourself from the ground using your upper body

In the session itself, there are some gentle warm up moves to get you used to letting the hammock take your weight; some deceptively tough cardio work, such as pulling yourself up on the slightly springy hammock fabric as you jump in the air; and some bloomin’ hard toning and strength work. This is certainly no gentle sweat-free class, the hammock is used like a TRX to support your feet as you plank and tuck, pike, lunge and suspend yourself from the ground using your upper body. Cue aching core, arms and shoulders for days afterwards.

Circus skills
The bit of the class that really stands out though, has to be the flying, circusy, cabaret jazz. You may go into AntiGravity never having done so much as a roly-poly before, but with a bit of  instruction, wham, before you know it you’re doing a somersault.

Turning yourself upside down with just a piece of material wrapped round your bits like a nappy is daunting at first, but you soon overcome the fear and realise that, while you may have spent hours swinging round bars as a kid, now a few minutes will suffice – it works your arms and core HARD!

Other inverted moves – such as hoisting yourself up into a mid-air shoulder stand – require a lot of strength and balance, but there are always alternatives given in case you can’t manage the full move and there’s the option to sit parts out if you don’t fancy it. One move I would advise everyone to try though is the belly flop. Never underestimate the simple pleasure that diving headfirst into a hammock can bring! Amazing.

The session ends with a few minutes of savasana (fancy yoga word for resting). Making the hammock into a cocoon, we hung suspended in silence, enclosed by fabric, and relaaaaaaaxed. Surreal but weirdly soothing, a bit like the class itself. When I grow up, I think I want to be a trapeze artist.

Ps, I didn’t manage to get any photos of me doing this class but next time I’ll take a few of me tangled up in silks trying to be a bat to give you a laugh.

Look at it, just look… Friday’s soup is liquidised health in a bowl. This super-food rich, Green Goddess beauty is 50% raw too. Makes…