The London marathon ballot opens today and to celebrate we’re checking out how the celebrities who ran this year got on. Some will make you go ‘wooh’, some will make you go ‘who?’ Some we had no idea who they were so we left them out. Good to see Katie Price on the start line though. Notice we said ‘start’ line.

A load of contestants from the Great British Bake Off

Ah, the lovely GBBO and all its lovely contestants. Thirteen of them took part in the marathon this year (under the team name baker’s dozen). The 2013 winner and creator of the Guinness World Record holding largest ever Jaffa Cake, Frances Quinn, came home first in 03:25:46. Proving without doubt that runners should eat more cake.

Other patisserie loving finishers included everyone’s favourite Bake Off star Selasi Gbormittah in 05:44:53 and the only other one we remember, Jane Beedle in 06:33:54.

Radio 1 DJ Adele put in a pretty speedy performance for her second London marathon. Running for mental health charity Heads Together, she knocked six minutes of her 2017 time, which is no mean feat in that heat. Also running from Radio 1 was fellow DJ Dev Griffin who crossed the line an hour later in 04:30:56.

The comedian, probably best known for being on I’m a Celebrity Get Me Out of Here (and a leaked sex tape, snigger) put in a very respectable showing for his first London marathon. After finishing he said ‘I’ve never felt so disgusting in all my lives’. We know the feeling Joel, know it well.

Running friends – food for the soul.

It isn’t a marathon times round up without regular runner and newsreader Sophie. It’s not her PB – that’s 03:29:15 – but she ran the Marathon des Sables earlier this month, a multi-day race covering around 156 miles across the Sahara desert, therefore she is excused.

If you watched Doctor Foster you’ll recognise actor Bertie as the cheating husband. If you didn’t, you won’t. Anyway, he ran the marathon to raise money for the Old Vic theatre. You’re probably less likely to recognise him without a picture but he hasn’t put one on Instagram, soz.

Shouty chef Gordon has run the marathon a few times himself (his PB is 03:30:37 at London in 2004) but this year he was cheering on his 18-year-old twins Jack and Holly. They ran for Great Ormond Street in memory of their brother Rocky, who their mum Tana lost when she was five months pregnant. That Jack proper looks like his dad doesn’t he?

Carl King off Emmerdale innit. He said it was brutally hot. He was right.

He’s an actor. He was in Hollyoaks, Eastenders and Dancing on Ice? He’s the one with the medal on? Still no? Well we kind of vaguely recognise him. He ran for the Children’s Trust for kids with brain injuries. He said it was pretty gruelling at times but he did it, so good on him.

George got coaching tips for his first marathon from running royalty Sir Mo Farah and Joe Wicks, aka the Body Coach. He described the race as mental, magical and also horrible. We fancy George. Not quite as much as we fancy his dad Larry though. That has nothing to do with running, we just thought we’d throw it in there.

Bloody love the Siddiquis. Googlebox’s best family no question. This is Baasit’s third time in a row running London. He was nearly half an hour slower than last year but, you know, sun and that. 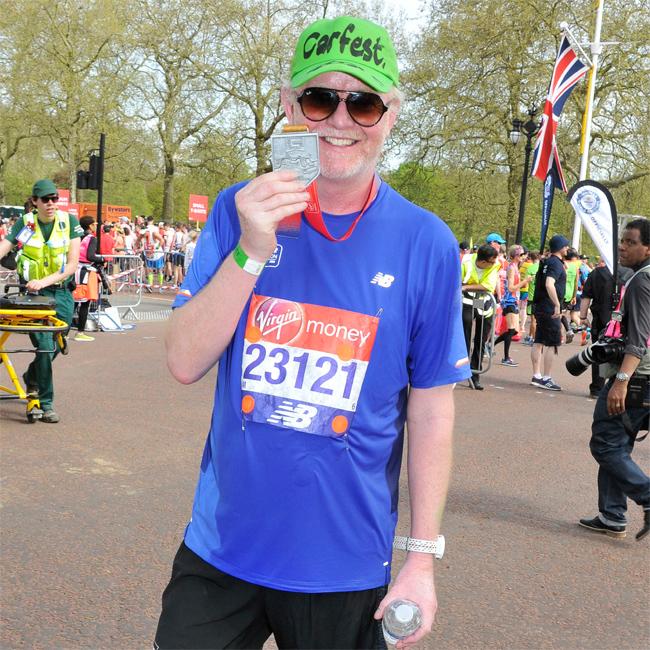 A regular London marathoner, this was Chris’s fourth time pounding the streets of our fair capital. Last year the Radio 2 DJ finished in 4:41:06, this year it took him around half an hour longer, probably owing to the heat. He and his wife are currently expecting twins, so we predict sleep deprivation adding a few more minutes in 2019.

It’s Rochelle out of the Saturdays! She ran for the Teenage Cancer Trust. After giving birth to her youngest daughter last year, Rochelle decided to sign up for the marathon despite not being able to run half a mile at the time. She said she was on cloud nine after finishing and was off to eat some mac and cheese. Good call.

Ps, We tried to put in a joke riffing on a Saturdays song title here, then we realised we couldn’t name one.

She’s back! Tv presenter and all round lovely woman Charlie has run 10 marathons but this is the first since she contracted malaria after completing a 3,000 mile bike ride from London to Rio ahead of the 2016 Olympics. Charlie’s kidneys are only half working and she had to learn to walk again after spending time in an induced coma so this is a sterling effort. Plus she had a little fight with the pavement about six miles in hence all that muck on her top.

Here she is, the one you’ve all been waiting for. The artiste formerly known as Jordan started the marathon wearing a giant pair of lungs that looked like butterfly wings. The costume was to raise money for The British Lung Foundation, as her mother Amy has recently been diagnosed with an incurable lung condition.

Katie was last seen on the tracker between 10 and 15k and then had to pull out with a bad knee . A policeman was later spotted wearing her costume while riding a bike. She was spotted in the pub. But she did raise lots of awareness for the charity and that’s what counts.

The Virgin London Marathon 2019 ballot opened today, Monday 30 April, and closes at 17:00 on Friday 4 May. If you want to run next year, get your name down here.

Four-time World Ironman Champion, undefeated in all 13 of her ironman distance races, a fierce campaigner for equality for women in sport… it’s fair…