Some people say it’s their wedding day or the birth of their children, but as any of you who have run a marathon will know, the best day of your life is actually the first time you complete the big 26.2! (err, can you tell we don’t have kids). For Abi Wright, who dropped 14 stone to become a marathoner, it was an emotional but bloody amazing experience. She tells us just how she got on. Love you Abs!

Goal: To finish in one piece! 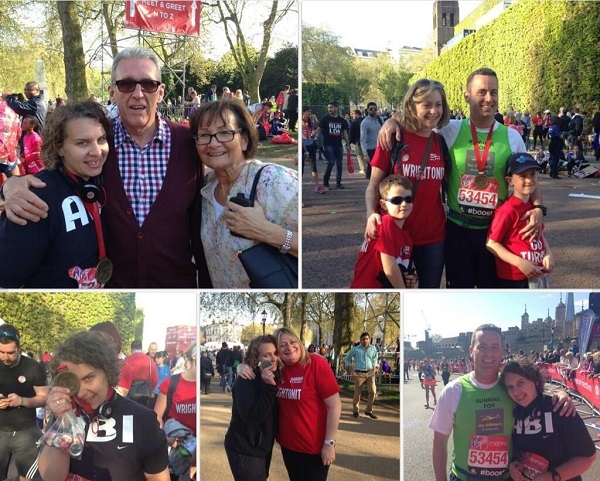 The alarm didn’t need to go off at 5.20 on the Sunday of the marathon, I was already awake, in fact I didn’t sleep. I’d been lying there all night thinking about my journey to this point and how I was going to complete my ultimate challenge.

The day before I’d laid out all my gels and worked out just when to take them, my friend Neil popped over with a playlist for the marathon – new music to get me through the highs and lows of the challenge, how cool was that? – so I knew I was prepared but I wanted to be mentally relaxed so after a shower, porridge and liberal application of tiger balm I made my way to the red start. I was running with my friend Allan and we were 2 hours early, but I didn’t want to rush and just wanted to spend some time focussing on the challenge ahead.

And as soon as it started I felt amazing. I couldn’t believe I was actually a part of the London marathon. Each mile was clearly marked and while the first couple flew by, when we got to three miles my niggling back issue kicked in. What a pain in the ass, literally, but I knew I only had one choice and that was to grit my teeth and fight through it. 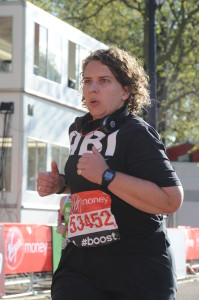 Before I knew I was at mile 9 and my friends were there, Charlotte had blagged a microphone from a charity and was shouting ABI WRIGHT IS WRIGHT ONIT! It proper made me laugh and was totally unexpected as I thought mile 13 was the earliest I would see one of the team.

Along the route I had a few tweet meets, it was awesome to meet the people who had been following me on Twitter. I was loving it, just running alongside other people that were battling for the 26.2 was inspiring. When we ran over tower bridge I could hear the roar from my team of supporters. Apparently I looked fresh! Tell you what, I didn’t bloody feel it but it lifts you so much to see your crew a quick hug and encouragement goes a long way, I actually got goose bumps! My parents were round the corner so we pushed on my, although my back wasn’t feeling pretty at this stage but I knew that I had that to look forward to. 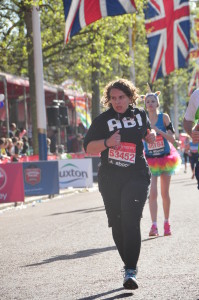 We pushed on and out of nowhere I saw Charlotte (from Lunges & Lycra) and I was told I was *****in awesome! (you are! Cx) Another surprise at 14.5, Sue popped up, another tweet meet, and gave me a great hug. All was going great but then the dark mile came up, we went under a tunnel and I lost it, crying like a baby worried about how I was going to finish – although never once did I think I couldn’t finish and that belief is what really makes the difference. I spoke to Allan and said I was in really bad pain, and I couldn’t run all the way to the finish. He coached me through and I just listened and really really focused on every step. He set small goals and in between I had to lengthen my stride and look up. My back needed releasing as my body had naturally tensed up due to the race stress.

By no time at all we were at mile 22. I knew my crew where going to be there, and they certainly were. The shouting was unreal and it really kept me going. I knew the next few miles were going to be the most challenging. Knowing that I wouldn’t see anyone until the end. The crowd shouting your name and the street party’s kept you ONIT, then I spotted my parents at 23m what a buzz. My dad gave me the biggest pep talk, which lifted me and we pushed on. I put my chooons on to focus my mind, it was Man In The Mirror and I must admit I had tears. This song has been one of my journey songs, one that I’ve played while I’ve been working out and running and making the huge change in my life from overweight to runner. Poor Allan had to sort me out again, bet he was thinking that pint of London pride isn’t too far away!! 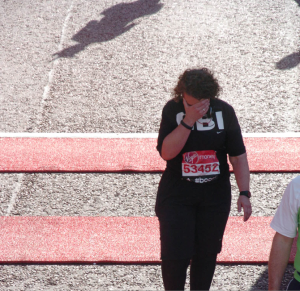 At mile 24 my cousin and aunty appeared from nowhere, this was amazing. Although they couldn’t take the pain away they really made me smile. Then I could hear ABI WRIGHT ARE YOU ONIT, C’MONNNN my friends Neil, Crids, Gazza and Mel where running with me. This was absolutely amazing it took my mind off the burning pain throughout my body. What a bonus I was almost at mile 25 so close to my goal. At this point my body was in a lot of pain, my back was screaming and my feet were burning – I had to check they weren’t on fire! I was expecting pain but I’ve never felt pain like it.

As we approached Birdcage Walk I had another surprise, my team were there shouting ‘Abi Wright’, quick hug and apparently I said I’m in horrific pain!

Then it was the home straight – seeing the 800 yards mark was amazing all my crew were with me running alongside me. It was such an amazing feeling, I was yards from crossing the line and all my mates where there giving it stacks.

My mind was saying just got to turn that corner and I’m in safe, my body was struggling. My toes were bent under as the pain was mega, my back was on its last legs and my ass – well it felt like it was hanging off!

Suddenly the finish line appeared and everything I’ve worked for over the past few years seemed worth it. Allan said to me, ‘this is it, let’s go’, I had nothing left but a slow pace jog. I pushed and pushed and although it seemed like the line was going further away, suddenly I was crossing it. I had completed the London Marathon, all 26.2 miles! The medal was placed over my head, but my body had shut down. I could hardly walk to collect my bags, but when I clocked my family and friends I hurried. I needed a big hug. The roar from the crew was amazing, all in the WRIGHTONIT kit. Sunday the 13th of April was the best day of my life.

Finally I felt I had completed the ultimate challenge, I coached my way through a marathon. 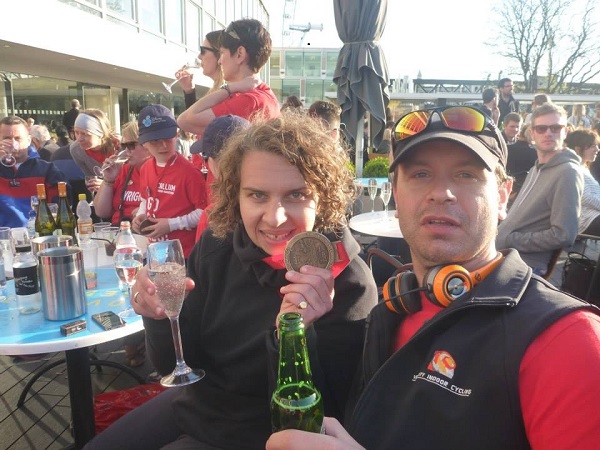 The celebrations are still going on and another one this weekend, such a proud moment. Especially as I have come through a tough battle to get here.

I’d just like to say one final thank you for all the support and sponsors, I have raised in access on £2000 for the Air Ambulance and my company are matching this.

Yes, I am a marathoner! 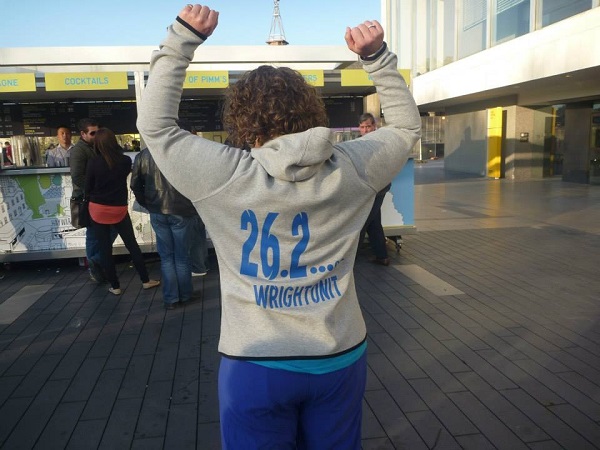 Woo hoo, we’ve got one place to give away in the Mizuno Reading Half Marathon on 2 March 2014. Could it be yours?