Forget bootcamp-style dorms and bowls of gruel, this is how celebrities (and Charlotte) do fitness holidays. Five-star all the way darrrrllliiiing

Yesterday was grey and lashing down with rain. It got me thinking about holidays.

Today I worked out in the early spring sunshine. I thought about holidays.

My flatmate is going on a running camp in Portugal next week. It’s got me thinking… well, you get the picture. I’ve been thinking a lot about holidays recently. In particular, fitness holidays. Oh and crisps, I’m always thinking about crisps.

Last year I was lucky enough to go on three sweat-inducing breaks: a bootcamp in Suffolk, a Nike trip to Sark and, most glamorously of all, a healthy stay at a five-star palace of swank in Morocco.

They were all bloody smashing but the one I’m really dreaming about at the moment is, naturally, the one I can least afford. The Earth & Health  programme at Palais Namaskar, Marrakech. 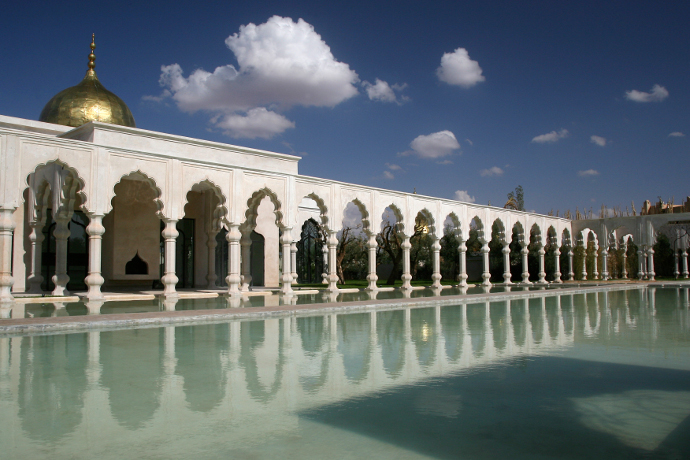 Before I go any further, let’s get one thing straight, Palais Namaskar was ridiculous luxury. Unreal. Bonkers. Like nowhere I have ever stayed before. I mean, just look at it.

I felt like an A-lister the whole time we were there. Unsurprising really as the decadent villa that four of us stayed in – with private pool, living area larger than my entire flat, sun terraces, roll-top baths and a kitchen for the butler (!!) – has paid host to Mick Jagger. It was also rumoured to be where George and Amal Clooney were going on honeymoon. Except they didn’t, their loss.

The living area was tiny

Anyway, I don’t want to bore you with details about the golden domes, rooftop bars and candle-lit walkways. I won’t brag about the food made from local produce and served under silver cloches or the guided tour to the souk to haggle for gold and spices. You want to hear about the fitness right?

Just kicking the shit out of a world champion Thai boxer

The reason myself and a handful of bloggers and journalists from across Europe had been invited to visit this little slice of hotel heaven, which Cantara from Gymbags and Gladrags said made her feel like Princess Jasmine, was to trial the new Earth & Health programme.

E&H, as I’m going to call it cos I can’t be arsed to type it out in full, is a five-day wellbeing stay devised and overseen by Abdoulaye Fadiga. You likely haven’t heard of him if you’re from the UK but may well have done if you’re from France.

He’s also really gentle and smiley and not at all how you’d expect. He’s going to make you work but he’s not going to be screaming in your face like some demented Sergeant Major. Which is good, as I can’t work out like that, it just gets me in a huff and I shout back.

As we were only there for a few days we didn’t get to trial the full programme, instead we got a taster of some of the activities on offer. Thai boxing with Abdoulaye was probably the highlight but there were also morning runs through the hotel’s grounds and some tough circuit classes – I love a good circuit – outside the hotel’s (as you’d expect) very well-equipped gym.

A Parisian parkour star, Williams Belle, was on hand to give us a class in primal movement. Turns out crawling around like a bear and leaping like a rabbit looks graceful when he does it, not quite as much when I do, and is pretty tough on the old quads. He also showcased some of his parkour skills, which involved scaling the hotel buildings and leaping from domed roof to domed roof. Very impressive/slightly insane.

While there you can choose to eat from a specially devised, nutritionally optimised and personally tailored H&E menu or stuff your face with the normal menu, which oddly alternated between French and Thai in the evenings. It would have been nice to eat a few Moroccan dishes, what with us being in Morocco and that.

As a vegan, I was a bit stumped on choice and ended up having the same meal most nights. That said it was delicious and since our visit more vegan and vegetarian choices have been added to the menu (I was just a couple of weeks early darnit). 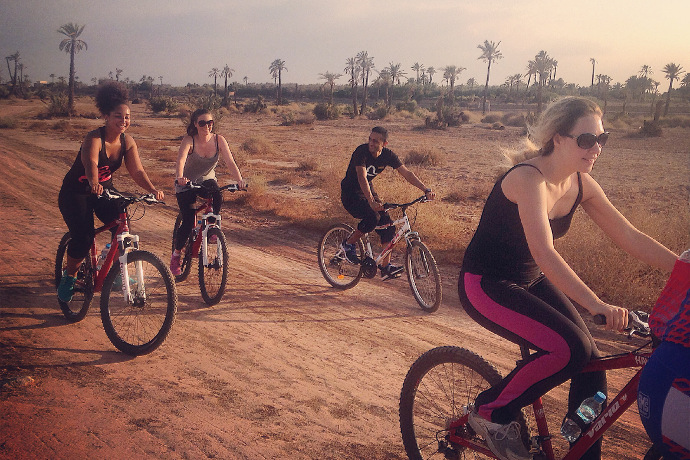 On our last night we went mountain biking through the dessert. Seeing the local villages and discovering how people live outside the luxurious bubble of the hotel was great – sometimes you can get a bit blinded by luxury and it’s good to realise the whole country isn’t like that and just how bloody lucky you are.

And we really were lucky. I loved the stay, it was just the right mix of working out and relaxing. And I’ve since found out that participants on the full programme now get to go hiking, climbing and zip lining in the Atlas mountains, which sounds immense and makes me want to go back immediately.

Except, I probably can’t. As you’d expect, this holiday isn’t cheap. You get a personalised diet programme, personal training, full-board and unlimited access to the hotel’s well-sized and opulent spa so you can see where the money’s going. But it is, for someone on my paltry wage anyway, a once in a lifetime experience.

At €3,880 if you’re looking for a healthy honeymoon, a luxury break for a special occasion or you’re just a bit richer than I am, it’s seriously worth considering. You’ll get to feel like some kind of Moroccan princess – a very fit and sweaty one – and the hotel is pretty darn phenomenal. Send me a postcard yeah?

To find out more about holidays at Palais Namaskar visit palaisnamaskar.com

Bit small, the door to our villa

We heard a rumour there’s some kind of cheesy celebration of love happening this month. F**k that shit, we’re all about sweating instead. Few…