There’s no need to spend thousands to be chased up mountains by an ex-marine, after a trip to Sark in the Channel Islands, I’ve realised it’s super-easy to put together your own fitness break (and no one’s going to make you have a colonic either). 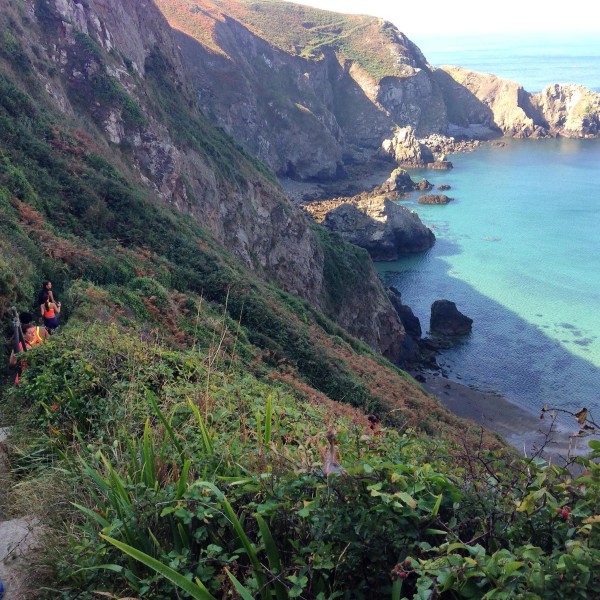 I’ve always wanted to go on one of those swanky fitness retreats, swan around in white robes, work out at dawn, drink green juices and shizzle. Unfortunately a lack of holiday time (when you’re freelance, holiday = no pay) and a limited supply of dollars mean I’m more likely to fit in the odd run between fish bowls in Marmaris than dedicate a week to my wellbeing.

Then, the other day, Nike came to the rescue. Just when I was at that point with work when you really, REALLY need a holiday or you’re going to staple your fingers to your head (don’t try it) they offered to whisk me off to Sark, one of the smaller Channel islands, along with a handful of other bloggers and a few lucky competition winners. They also promised to kit us out in new gear for the duration of our little escape. Bonza. 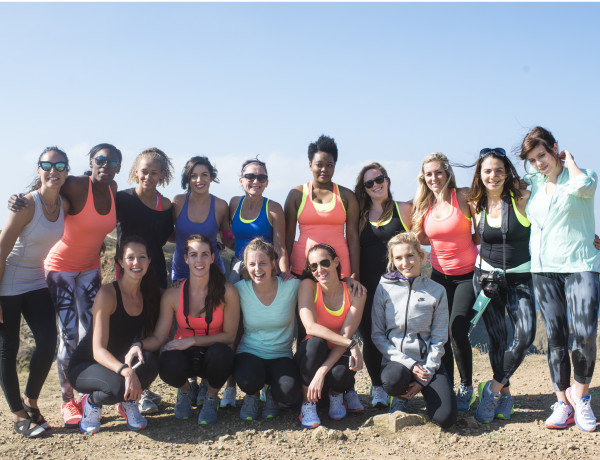 However, while I would love to be all smug about the amazing time I had, all the swanky new kit and delicious food (and hey I will be a bit, I’m only human), the trip actually made me realise just how easy it is to plan a little fitness escape with your mates without spending a stash of cash. Next year it’s definitely fitness weekends a go-go!

So close to London 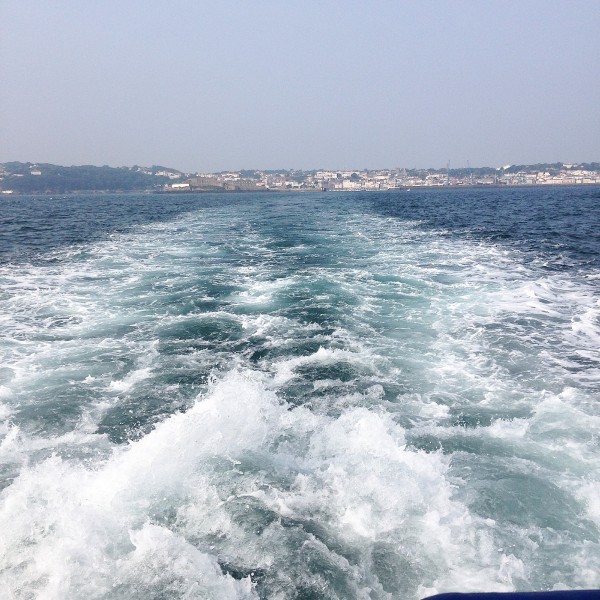 Before I went to Sark I’d never considered it for a holiday, particularly not for fitness as I presumed it was a place for older people. I was wrong though. While many visitors do have the odd grey hair or two, the natural beauty and rural landscape make the island perfect for all kinds of sporty activities – plus it’s chuffing gorgeous! It’s also surprisingly close, in fact the Channel Islands are quicker to get to than a lot of places in the UK. After an overnight stay in the rather swish Ace hotel in London we took a coach to Gatwick, a 60-min flight to Guernsey (well officially 60 mins, it was actually much quicker) and then a short ferry ride to Sark, which lies just off the coast of Normandy in France. 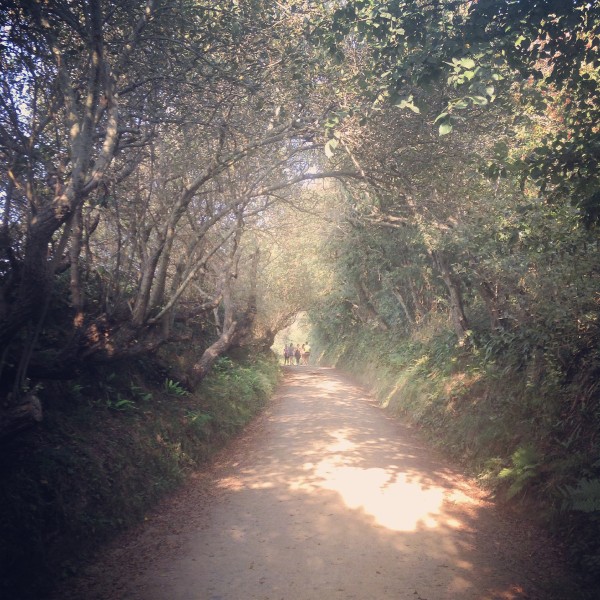 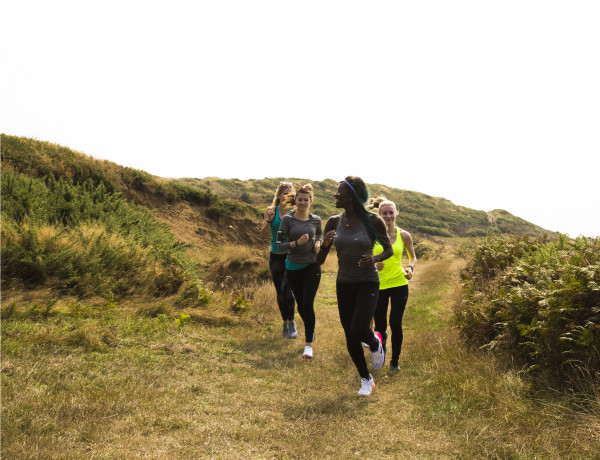 We arrived to a beautiful warm, sunny day, much brighter than in London. And although I have absolutely no evidence I’m going to say that it’s always sunnier in Sark. And cars are banned! The place is tiny, around two square miles, and many of the roads are dusty tracks as opposed to tarmac so the only vehicles you’ll see are tractors, bicycles and horse and carts. 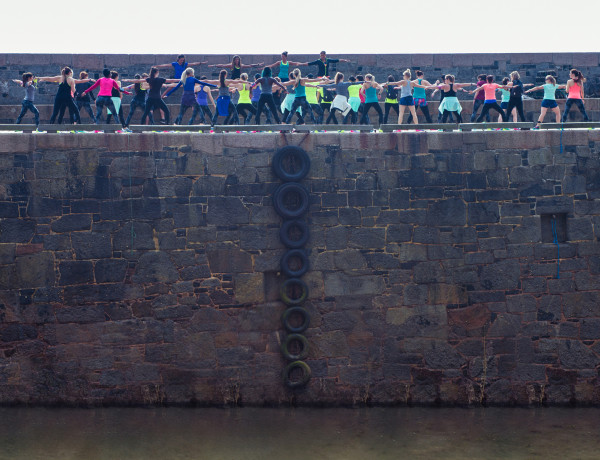 This meant that while a tractor took our bags to the hotel, as soon as we landed we were launched into an instructor-led warm up around a secluded fishing cove – think the lone fisherman was a bit startled by this – and then set off on a trail run to the hotel. Apparently it was only 1.5 miles, but it felt so much longer as we covered so many types of terrain. There were steep hills and rocky descents, forest paths, huge tree roots to negotiate and THE MOST STUNNING VIEWS EVER! With the exception of the fisherman we only saw one other person the whole way, an old lady on a cliff top who didn’t take kindly to 30 screaming women descending on her as she peacefully read her book. She’ll get over it. 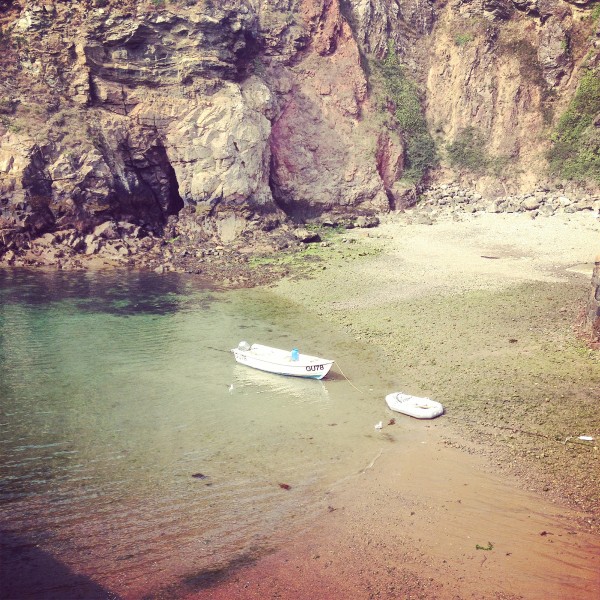 The lack of cars and the small size of the place means it’s easy to just go off exploring on a run or hike and not have to worry about traffic or getting lost. Apparently there’s a 10-mile trail run you can do all around the island and Sark also has its own free running club that meets weekly, so if I go again… 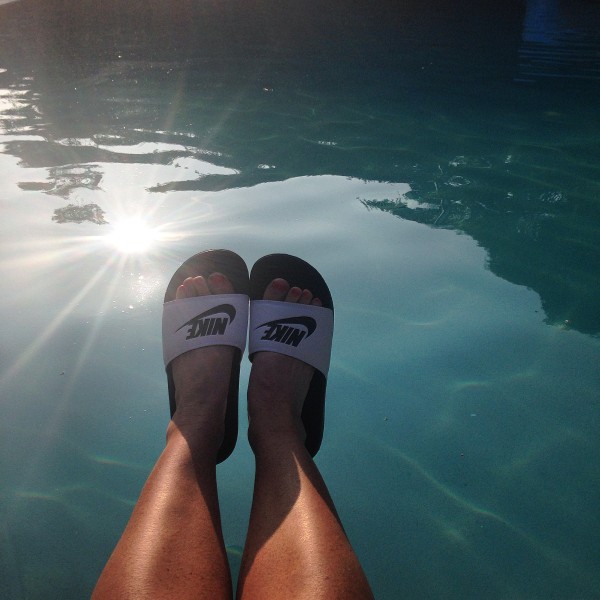 As this was a no-expenses spared trip we were staying in the 4-star Stocks hotel. When I say staying, we took over! While it’s one of the larger hotels on the island I don’t think they had much room for anyone else. But it was the perfect base, healthy buffet lunches and breakfasts, three-course dinners and local produce. I’m not a fish or dairy eater but the local shellfish and Sark cream looked amazing. 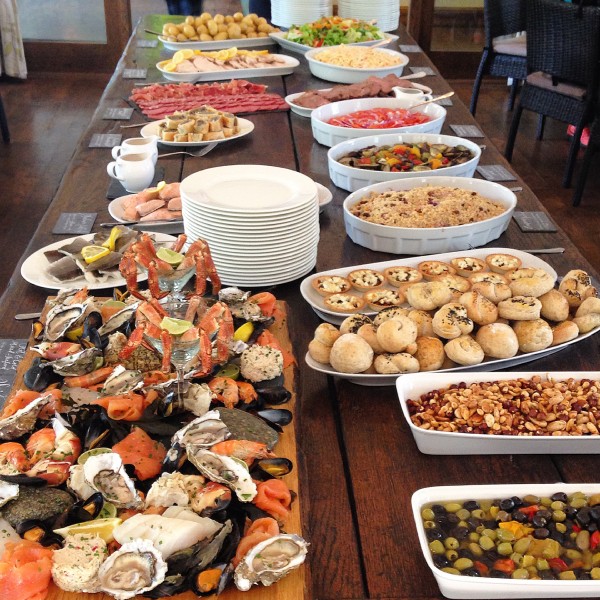 There was an outdoor pool and hot tub to chill out by and the setting was idyllic. An old stone farmhouse house and stables tucked away off a quiet country road. You couldn’t hear a thing at night and while we were so exhausted we could have nodded off anywhere, it’s amazing how much better you sleep without the city soundtrack of road noise and police sirens, street lights and neighbours.

If I went with friends I may not spend so much on a hotel, you can always create your own healthy food in a self-catering property or one of the island’s campsites. That said, you can’t beat clean white hotel sheets, a comfy bed and a bit of luxury after a hard days working out (and it’s not like you’re going to be spending loads on going out, sark is not renowned for its all-night raves). 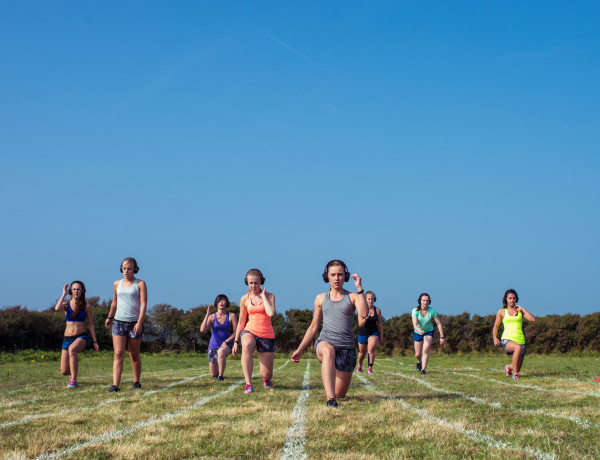 We were lucky enough to be joined by some of the Nike master trainers, Jos and Sonja, on our trip, plus Jess from Fat Buddha Yoga and Anya from Barry’s Bootcamp. 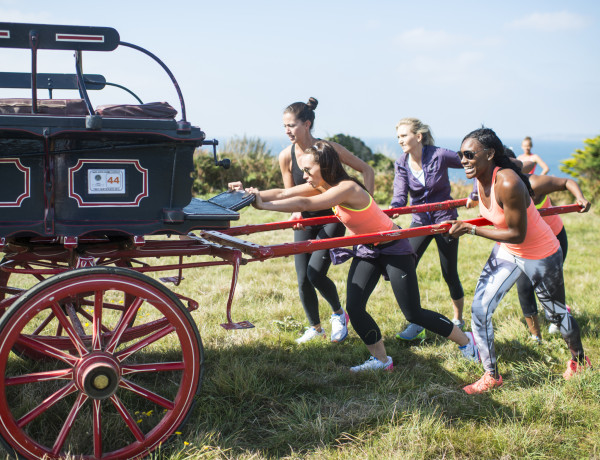 This meant our workouts were sorted (and hard). Aside from some resistance bands and silent-disco-stylee headphones (so we could work out with pumping music and not disturb the cows) everything we did used only our natural surroundings. So a Nike Training Club (NTC) session involved loads of body weight exercises and partner work – jumping over and crawling under each other in planks that kind of thing. We lifted logs and, in one particular challenge, we even pulled horse’s carts as a team! During Barry’s Bootcamp we sprinted round a track that a farmer had kindly painted around his field and sunrise yoga with Jess was the perfect way to start the day and stretch out aching muscles.

If you wanted to do this on your own DIY fitness break you could nick a class from the NTC app, design a workout each and take it in turns to lead each day or find a local yoga class. Word of warning though, fields are wonky. Trying to do a crow on a slant may well result in face splat.

On our final day – we were only there for two but it felt both longer, as I was so chilled, and shorter, as I wanted MORE! – we set off in groups for a challenge round the island. This involved cycling with maps to find spots where we had to perform little tasks. Once I got used to riding a mountain bike rather than my road bike I was loving that cycling. Best way to explore the island. We headed over to Little Sark – a small island joined to it’s bigger sister by a causeway – disappointingly you can’t cycle across as the descent is so steep you’d go flying, it’d make for a great stunt though. 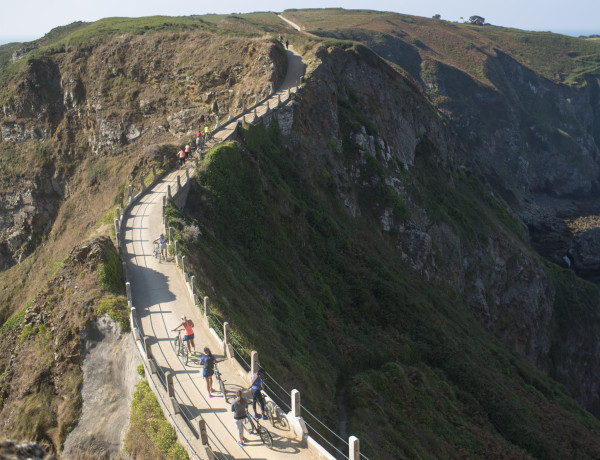 This is where we pushed the aforementioned carts and may I just note that my team (Vicki, Alex, Carly, Claire and Hollie) absolutely smashed that challenge! Even though our opposing team had 400m hurdler Perri Shakes-Drayton on it. (Oh didn’t I mention she was there? And 1,500m Commonwealth medallist Laura Weightman plus junior athletes, hurdler Shona Richards and sprinter Dina Asher-Smith – more from them in another post).  We also cycled to some steep steps leading down to a secluded beach. Fun to go down but bloody hard work to come up! I loved seeing those who were scared of heights beat their fear with the help of the team and scale those stairs. (Plus when someone got a bit scared we got to stop and have a breather, bonus.) 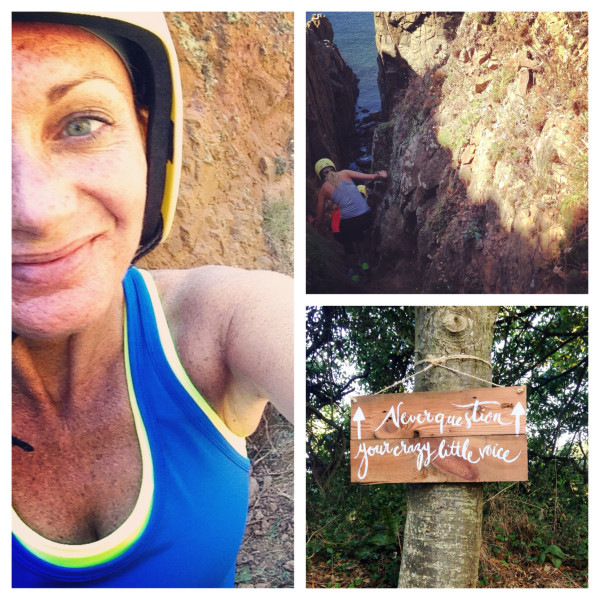 The best challenge though was the last. We met some guys from Adventure Sark who plonked a hard hat on us and got us to climb up and down some rocky cliffs until we reached an underground cave. Loved it. If you have longer you can climb right through the cliff and out the other side (which takes around three hours) or even go coasteering – jumping off cliffs into the sea!

DIY
Cycling is easy here, no need to worry about your Green Cross code and there are loads of places to hire bikes. If you fancy an organised activity then Sark’s system of underground caves and gullys can be kayaked, climbed, swum and jumped. While I can see why Nike didn’t put this on on our trip, oh my god do I want to jump off a cliff! So, if you do go, please can I come? 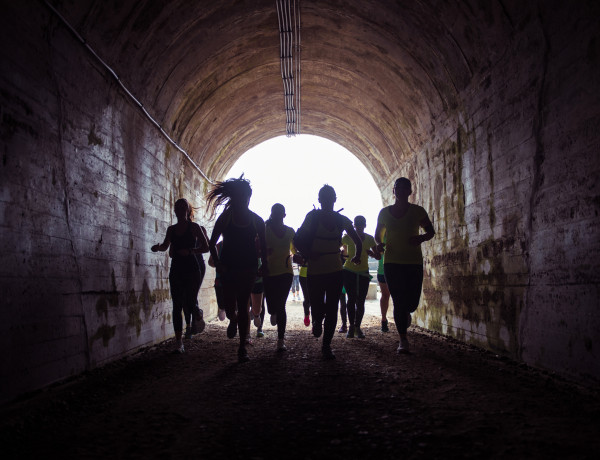 Huge thanks to Nike, Stocks Hotel and the island and people of Sark for being generally amazing!

Whether it’s a 5k or an ultra marathon, running is a lot like drinking… you need to pace yourself if you want to last…