So we’ve had some sunny weather recently. Hurrah! While for most people that’s the cue to book in for a pedicure and whack out the flip-flops, for us it means finally being brave enough to try out barefoot trainers.

These little babies, the Vibram FiveFingers® Classic, have been lurking in the cupboard for a while – they’re open on the top so the prospect of testing them in the rain and cold wasn’t too appealing. However, bring out the sun and they seem like a much better idea. (PS, there are other, more closed, models available, probably better suited to the UK’s – how do I put this – shite climate.)

They ain’t pretty are they?

The barefoot basics
Barefoot shoes – shoes with little or no cushioning that allow you to mimic the feeling of running barefoot – have been around for a few years now. Vibram FiveFingers® launched in 2006, really hitting the big time when Christopher McDougall’s 2009 book Born to Run reached the bestsellers lists and popularised barefoot running techniques.

The basic idea is that throughout evolution humans have been running barefoot so this is a more natural way to run. It was only in the 1970s that we started running in cushioned trainers.
Barefoot shoes encourage you to run with a forefoot strike, which (limited!) research states could reduce common running injuries as there is less shock being absorbed by your body than if you land heel first. However, there are many different types of heel strike, and lots of pro athletes run this way – including me! I think they are referring to running with a straight leg strike, which can put quite a lot of force through your joints every time you hit the ground.

So what sports are they suitable for?
As well as running, Vibram FiveFingers® can be used for general fitness, trekking, weight lifting, water sports such as kayaking and surfing and there are also casual ‘urban’ models you can wear about town – well no worse than crocs I suppose.

Appearance
Let’s face it, these shoes aren’t the prettiest things you can do to your feet. A picture on Facebook elicited responses including ‘horrid’, ‘is this an avatar costume?’ and ‘oh no, you’ve become one of THOSE people’. But I braved the stares and took them to the yoga studio (where they got a positive reaction from the instructors) and for a run in the park where I felt protective of them in the way you would a fugly dog.

Barefoot in the buttercups

Comfort and fit
Squeezing your toes into the five little toe slots is a skill you definitely need to practice. It took ages to get these shoes on and, as my little toe is tiny and curled up like a peanut, forcing it straight proved pretty painful. The slots are designed to help your toes separate and spread out, strengthen the muscles in the foot and lower leg and provide greater balance and agility – I’m not sure how toe slots are better than a wide toe box, but never mind.

Strangely, for a shoe that is so closely fitted to the shape of the foot, Vibrams don’t come in half sizes. Instead, the model I tried pulled tighter with a drawstring at the back. I had to pull it in quite a long way to get them to fit snugly, resulting in a loop of elastic at the back which my separated big toe got caught in a couple of times and also slipped under my heel as I ran. Annoying and potentially dangerous. I’d go closed model if I were you, laces or velcro straps keep them on your feet and there’ll be a lot less trouble if you encounter some dog shit. 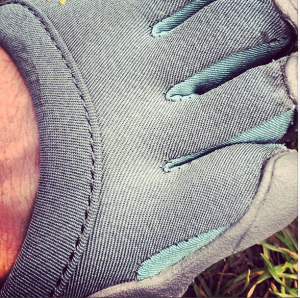 Running and gymming
Unfortunately, you can’t just go straight into bashing out a marathon barefoot. As our feet and lower legs are often weak owing to the padded and cushioned shoes we wear most of the time, you need to build up to it or you’re going to end up causing yourself injuries. There are exercises you can do to strengthen your feet on the Vibram website.

My friend Chris, who works in a running shop, says he sees lots of people coming in with stress fractures after doing too much too soon in barefoot shoes so, paying heed, I decided to try the Vibrams out gently with a couple of circuits of my local park. Much to my surprise, I liked the feel of them. They felt light and free, running down grassy hills in them was wicked, like being a kid again. And it was so nice to feel the different terrain under your feet – I tried them on grass, gravel and rocky ground – although you could feel some of the bigger rocks through them. I reckon they’d be great for running on sand. They’re also supposed to aid in balance as they’re flexible and your toes have room to spread helping you stabilise your body, so I wore them to circuits and have to agree, yes they are. More importantly for me, they give you a good grip when balancing on tree trunks pretending to be a gymnast in the park.

That said, I didn’t notice any change in my running form. I seemed to still have a glancing heel to mid-foot strike rather than running more on my toes, and if you have to learn how to run in a shoe and train for it, well who has the time? I also wouldn’t want to run any real distance in them, particularly not on hard road surfaces as the separators made my toes go numb after a while, the drawstring cut into my foot and I imagine you’d get a few blisters on your soles. So there are aspects I liked and aspects I didn’t (the main one being those stupid toes slots). 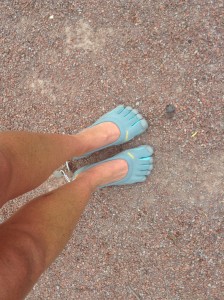 Love ’em or hate ’em?
Barefoot runners and Vibrams in particular seem to provoke pretty strong reactions, they certainly have their lovers and their haters out there. Which camp do I fall into? Neither. I may take some Vibrams on holiday with me for running on the beach, use them for off-road runs in the country – I like the extra balance and feeling you get from the thin sole – but I wouldn’t replace my normal distance shoes with them. I would, however, be tempted to switch to a more minimal shoe as I do like feeling the ground – I tend to steer clear or excess padding and cushioning anyway as so much of it seems like marketing gumpf designed to sell us the latest model, and I can’t help feeling the same about some of the aspects of barefoot too – those bloody toes for example. And I’m dubious about the general idea that barefoot running is built on – isn’t the fact that Kenyans don’t get injured just as much to do with the fact that they have been running continuously for most of their lives as to what they wear on their feet?

Anyway, many of the bigger running shoe brands are now making ultra-light models that incorporate aspects of barefoot and minimal shoes such as lower heel drops (the difference between heel and forefoot height) with a bit more support and cushioning, meaning you can get the best of both worlds in a kind of in-betweeny shoe.

At the end of the day though, I think what you run in is very individual. I’m certainly no running shoe expert but I’d say don’t be swayed by marketing and gimmicks, go to a specialist running shop for advice, try on lots of different models and when you find one that’s comfy, works for you, and doesn’t cause you pain… go for it. 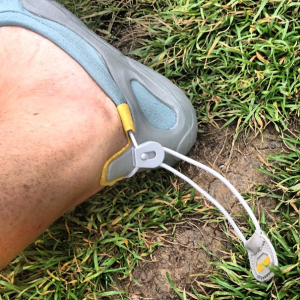 Irritating elastic drawstring at the back

Run in barefoot shoes? Let us know what you think in the comments box below

The newest running shoe on the Nike block is finally out and it’s certainly giving us come hither face. But does it run as…