The much hyped, much anticipated Color Run has finally landed on these shores. What did we think? Read on my friends, read on.

What: The Color Run London 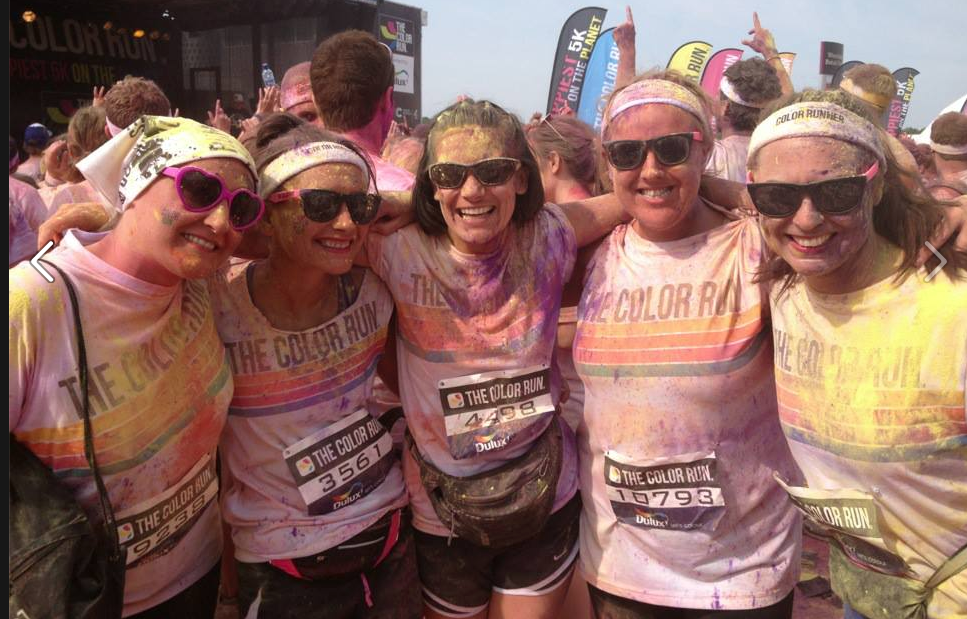 Let’s face it, the self-proclaimed ‘happiest 5k on the planet’ is not actually about the running is it? It’s all about getting some good pictures for your instagram feed. And boy did we!

Jokes, jokes. Of course it’s about taking part in a big load of colourful fun. If you’ve been training for a 5k however and want to test yourself, this is not the run for you. For a start, it’s untimed. Walkers, people with children and runners all begin together, which is pretty annoying for the first km as you’re ducking, diving, tripping over kids and trying to get a couple of strides in without having to walk. 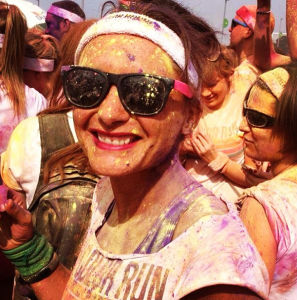 But then, the first km marker looms – a big inflatable arch manned by a tunnel of marshalls ready to cover you in bright pink powder paint and a woman in a pink carnival outfit and feathered headdress – and suddenly the congestion doesn’t matter anymore. This is what The Color Run is all about, pissing around with your mates, having a laugh, high fiving every other runner/walker/paint-doused individual you see and getting absolutely FILTHY!

Originating in the US, where there are more than 100 Color Run events, and having already toured Australia, the Color Run is big business, so there was a lot of media interest and hype surrounding its launch on these shores. London was the first event but there are further runs planned for Manchester (21/7) Belfast (24/8) and Brighton (14/9), and in the end some 15,000 runners turned up on a scorching summer’s day to find out what this paint splattered running lark was all about.

We arrived to a sea of pristine white-clad runners – a white t-shirt (it wasn’t going to stay that way for long) was included in the race pack, as was a white headband (ditto) a Color Run transfer tatoo (YES!) and a plastic poncho to wear on the journey home to prevent your car seats getting a colour run dusting. 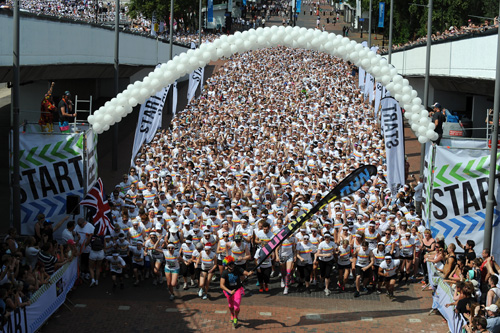 The location was, rather unglamorously, a large car park by Wembley stadium. But there was a great atmosphere with ‘happy stores’ selling Color Run merchandise at actually pretty reasonable prices and some Virgin Active ‘Angels’ (small bit of mouth sick at the name) giving a zumba warm up on the stage. There’s nothing like a bit of samba-ing and whooping in the sunshine to get you in the mood. It even blocked out the fear I felt on hearing the MC’s voice – he also warms up for the swim before the London Triathlon, brrr, made me nervous.

As there were no official start times everyone then funneled into the start shoot with waves of around 1,000 runners being set of at a time. The route, well it couldn’t exactly be described as inspiring – it was around an old industrial estate which smelt, oddly, of super noodles – but then I can’t imagine many of London’s parks or residential streets would be happy to tackle the clear up, and to be honest you soon didn’t notice as you were too preoccupied wondering what colour paint was going to be lobbed at you next (there were paint stations at each km mark).

Actually, I was a bit surprised to discover it was people throwing the colour – i don’t know what i imagined, some kind of sprinkler system or something – but it worked well as people are not as regulated as machines, they leave things unattended. Runners were soon stealing boxes of paint, grabbing handfuls, throwing it all over each other, rolling around on the floor. Muchos fun 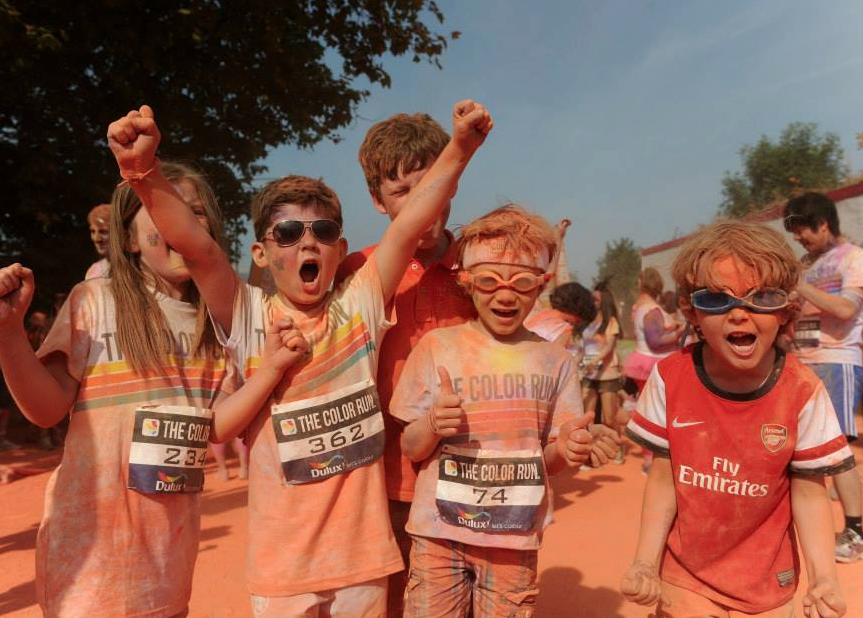 And when we finished, instead of a medal (who needs a medal for a 5k anyway?) we were handed a packet of powdered paint for the colour festival. A big dancing, jumping mass of people standing infront of a stage playing cheesey tunes (gangnam style anyone?) and throwing coloured paint all over each other. Sod the race, this was the best bit! Take note though, this is not a race to do on your own, the more of you there are, the more fun you’ll have and the easier it is to crowd surf. 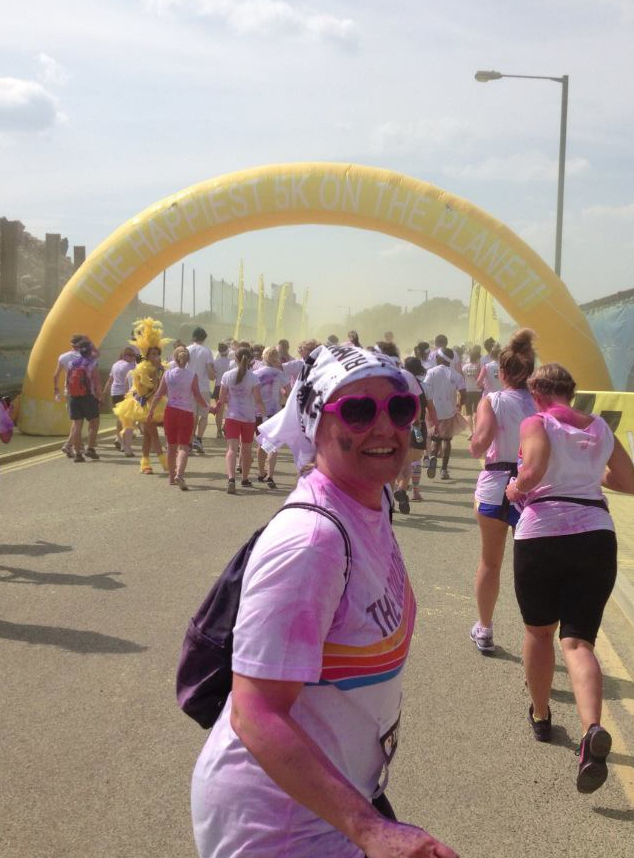 Yes, the Color Run had its problems, no bag drop – what’s that about? –, walkers, runners and people with children should have been set off at different times, we didn’t have long to wait until we started but some people were hanging around for ages (not ideal on a hot day), and I wouldn’t have minded a few more of the ‘Carnival’ dressed cheerers, but if you take the Color Run for what it is, a big old dose of colourful fun, you’ll have a blast. 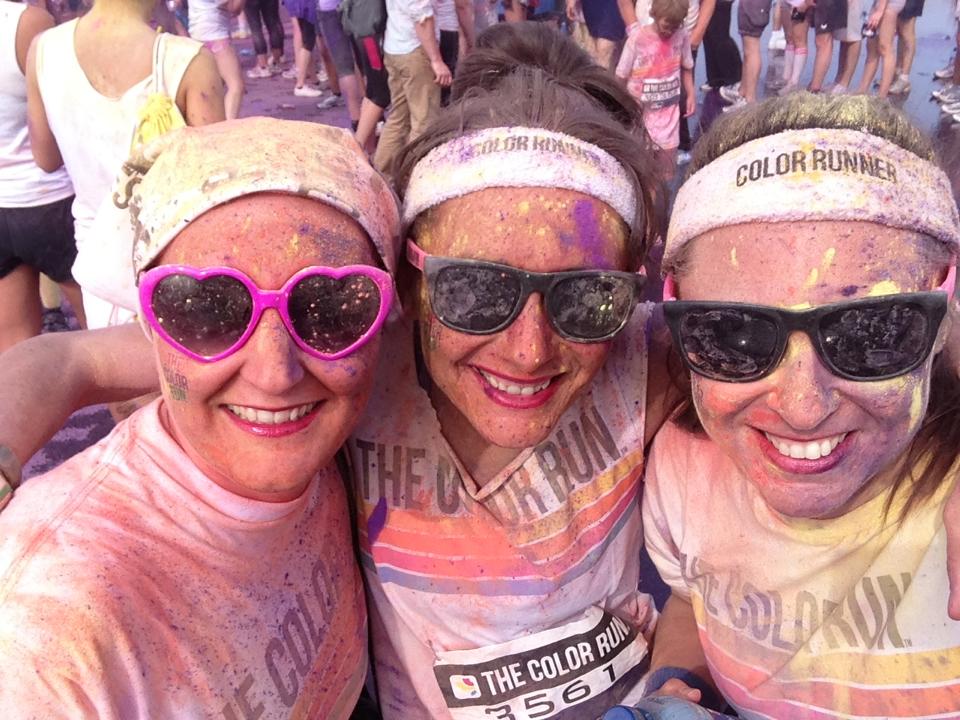 At £30 it is quite expensive but some of that (although I’m not sure quite how much) goes to partner charity Stand Up To Cancer and if you met up with your mates for a couple of drinks you’d easy plough through a twenty and this is much more memoranle memorable. Would I do it again? Not for a while, it’s juts nice novelty. Am I glad I did it. Sure am. Would I recommend you to? Trust me, you’ll be tickled PINK that you’ve done it. (Soz).

An event which combines our two favourite things, running and gin, where do we sign!?