Last week we pulled our fiercest fighting faces and tried our hand at Show Wrestling. Unsurprisingly, we were ace. Look out for us on WWE soon. Oh, and in the meantime, don’t mess, we got the moves!

So it’s a sleety Thursday night and we’re in Gymbox Covent Garden chatting to a few mates by the boxing ring, when suddenly this huge bloke comes tearing towards us, spraying sweat across the gym floor and beating his chest wildly. Wearing only the tiniest of tiny pants (It’s February man!) he throws himself over the ropes, lets out an almighty roar and somersaults straight onto the head of some dude standing there.

Fair to say this isn’t your usual fitness class. But then this is Gymbox, renowned for it’s ‘unusual’ take on working out, and Show Wrestling is just the latest in a long line of inventive classes to hit the timetables. Well, they call it Show Wrestling, I call it the career of my dreams!

It took a while but I’ve finally realised what I want to be when I grow up.  A sequin-covered, ridiculously monikered, fighting machine! GRRRRRRR!!!!

Show Wrestling – think WWF, WWE, Pro Wrestling or whatever it’s called nowadays – is, believe it or not, classified as a performance art. A pantomime of theatrics, choreography and athletic derring do it combines two of my most favourite things ever – exercise and showing off!

“There are a lot of physical benefits from wrestling such as strength, flexibility and conditioning,” says our trainer for the day, Darrell Allen, who is also a pro wrestler and head coach at Progress Wrestling in Camberwell. “A lot of people, however, do it for the fun, exciting side of it. The buzz you get wrestling in front of a large crowd is unmatchable. It’s certainly the reason so many people stick with it once they get started and why so many are currently taking it up.” You’ve sold us Darrell.

And we can definitely vouch for the fun side of it. As well as learning classic wrestling moves and holds, this was the best laugh I’ve had in the gym in ages. As this was a special preview class we got a full-on wrestling demo from five of Progress Wrestling’s stable of fighters. Yep, in costume and everything. There was Pastor William Eaver with his long hair, biblical beard and y-fronts with holy crosses on them – not sure what Jesus thinks about him stamping on people’s heads for a living. The frankly massive ‘BodyGuy’ Roy Johnson, backflipping beardy Kyle Ashmore, young buck Damon Moser and lanky, straggle-haired Chuck Mambo who looked like an extra from Scooby Doo but, like all good underdogs came out on top. 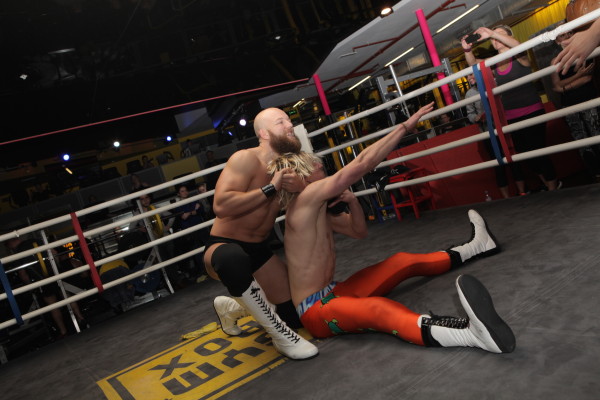 The two advantages of Show Wrestling over other contact sports is that, A you get to give yourself a stupid name, and B you don’t get hurt. Err, well not that much anyway. No matter how little force the wrestlers were putting into those drop kicks, belly flops and flying clothes lines in their demo there’s no way they didn’t sting a bit. And a quick chat in the pub afterwards reveals a litany of injuries from torn triceps to head cuts and fractured heels. But then, that’s when you get to the level where you do really cool stuff. We were starting with the basics. 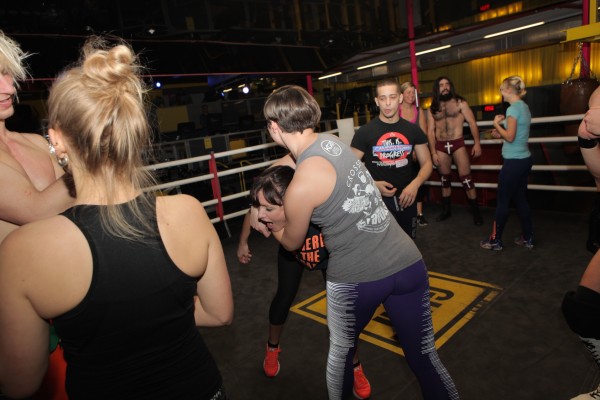 After a short warm up and a few conditioning squats and sit ups (I say a few, 50 of each no breather) we were on to the moves. Oh yes! Partnering up, we learned to get each other in the collar-elbow tie up – one arm round the back of the neck, the other over our partner’s elbow – this is typically the first hold in a wrestling match. From here we progressed to the headlock (nuggy optional) and learned to throw our opponent’s arm back, spin them round and get them in a full nelson. And while it was all light-hearted fun, the grip you learn in the full nelson can be used to push your partner’s head and neck right down to their chest in a very painful manner – just saying.

Now I wouldn’t describe myself as a violent person but, like most of us, I grew up scrapping with my brother on a regular basis – until he shot up to 6’4″ that is. And gosh, wasn’t play fighting fun? Unfortunately you can’t get away with grappling in public quite as much as an adult, so Show Wrestling is all the excuse you need to tussle with your mates and roar in their face without them reporting you to the fuzz or defriending you on Facebook. 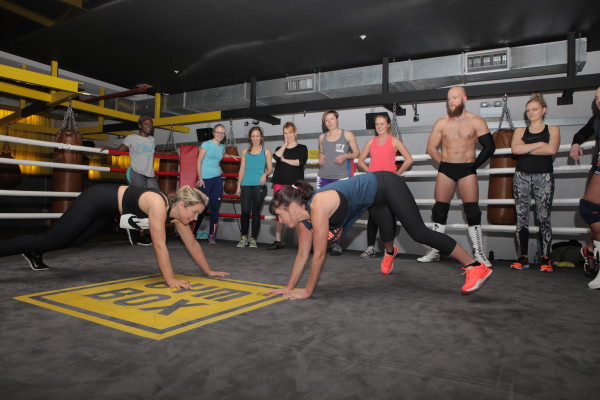 And while we weren’t ready for a mass tag team brawl after one session, we did take it in turns to face each other in the ring, holding a plank to work on the core and trying to pull our opponents arms from under them so they went crashing to the mat. Ace. Thoroughly ace.

As you may have guessed, I loved this class. The only things that would have made it better were an extra hour and a swanky wrestling costume. They also do private parties, hello! Anyone want me to organise their hen do?

If you fancy taking to the mat for a bit of a scuffle, Gymbox holds Show Wrestling classes at their Holborn and Covent garden clubs on Thursday evenings. Click here for details. Progress Wrestling also run beginner courses at their base in Camberwell, details are on the website progresswrestling.com

Images Vesna Nikolic (oh and the not so good ones via us).

The newest indoor cycling studio in London town has a leader board for in-class racing, proper good bikes and a whole load of whooping….