Hannah has completed her first ever triathlon  – yep she’d never done one before but still decided to enter an ironman, nutter! It wasn’t as easy as she hoped but provided some good learning points before the big day in less than a week’s time!!

Ironman history: The first of hopefully many 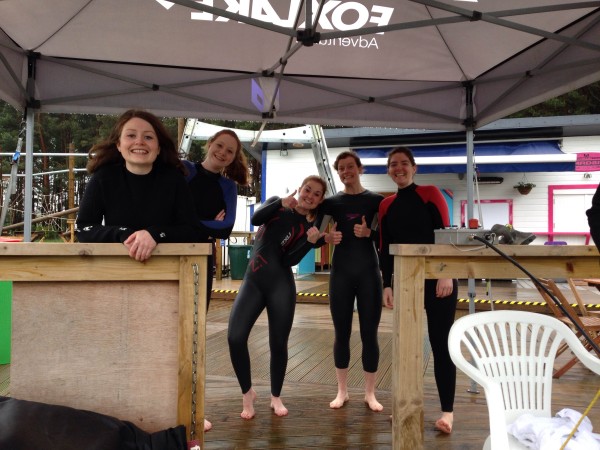 I am officially a triathlete!  I did my first (and last before Ironman) triathlon on Sunday and I didn’t drown… I also wasn’t the last out of the water so that’s a bonus!

I’d had a busy couple of weeks training so come Sunday I really had to think of the Olympic distance Northumberland Triathlon race as a training session as feeling fresh I was not. The morning started at 3.30am with breakfast, not what I want to be doing at 3.30 in the morning, which resulted in a bit of travel sickness on the way down to the triathlon.

The swim – 1.5km
In spite of an empty fuel tank before the race had begun, it went ok on the whole. I had managed to get one successful (and by successful I mean I swam more than 30m before freaking out about something touching me) open-water swim session in before my race meaning I was prepared for what lake swimming involved, I even kept going when my hand got tangled in a weedy thing! I finished the 1.5km swim in 29 minutes, I won’t be signed up for any Olympic swimming teams anytime soon but I knew that would be the case.

The bike and run – 40km and 10km
Out the water and I was happy, my favourite bit was coming up. I struggled out of my wetsuit without falling over, grabbed my bike and pushed it through the puddle that was the field transition was in. Jumped on the bike and my first thought was ‘oh shit this is going to hurt’. My legs felt like lead after the swim, the first 7km was just a battle. The other 33kms felt a little easier but for the first time ever I was dreading running, if I was struggling with my cycle (by far my strongest discipline) running was going to be a veritable slog! And it was a bit. I know I can run a 10km in 43 minutes so doing it in 50 minutes was a slight disappointment but again I have to remember it was my first triathlon. 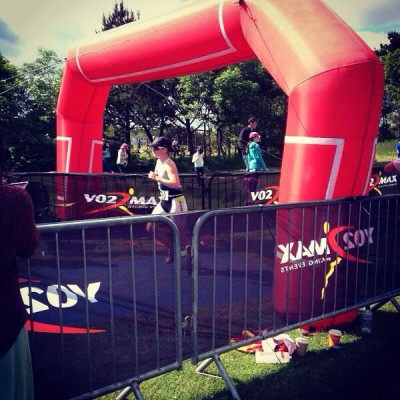 The finish
My highlight of the race was the surprise of finding out my bike time. I was convinced it was going to be slow, so finding out it was 1 hour and 5 minutes was quite nice – if my maths is correct, I averaged over 23mph. No doubt it was my cycle that meant I finished a respectable 3rd female senior and 5th female overall and picked myself up a trophy!

I am a little disappointed that I have no aches and pains from my race because clearly I didn’t push hard enough, nothing more satisfying than not being able to walk for a couple of days after. I even scheduled a sports massage for Tuesday as I thought I would need a good rub down and it was actually far less painful than I was expecting, it was almost enjoyable.

Apart from my triathlon, training has been going well, steady but well. I know I am favouring my cycle training over anything else and I know I should be focusing more on my weakest discipline, swimming, but with the amount of training you have to do for an event like Ironman, doing the things I dislike all the time would no doubt put me off training altogether. I suppose that’s the advantage of doing triathlon, there’s most likely always going to be one you love, one you like and one you tolerate.

Things I learnt from my first triathlon

It’s August, everyone’s on holiday. Lucky them! If you’re still in town though, check out the best fitness events on offer this month. Including…