After a misogynistic press release and images like the below, I was so ready to hate on this class. But actually, Bunny Bootcamp is nothing like you’d expect. It doesn’t objectify women it celebrates them, and it’s a great high-intensity workout. Just a shame about the whole Playboy thing really.

When: Classes run from Tuesday to Saturday, see Gymbox timetables for more details.

Cost: Free to members, £10 to non-members

I’m not blonde. I don’t have a particularly impressive rack. I’ve never worn lucite heels or a fluffy tail, and I have no desire whatsoever to join an OAP’s harem… It’s fair to say, I really didn’t think Bunny Bootcamp was going to be for me. Yes, that’s bunny as in Playboy bunny!

The video showing outside the studio – playmates flicking hair and exercising in slow mo – didn’t do anything to assuage my feminist guilt at trialling it either. What we do in the name of reviewing, eh? 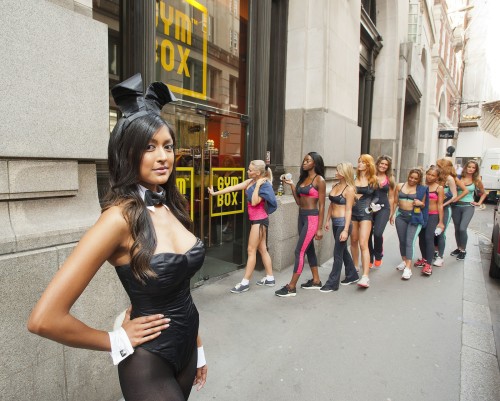 Tacky promotional images do this class a real disservice.

I was wrong though. Forget simperingly sexy man-pleasing moves and bust enlarging exercises, Bunny Bootcamp is all about celebrating the fact that you’re a healthy, strong woman. You’re confident, you’re fit and whatever your size or shape you’re darn scorching HAWT. A sample tune from the cracking soundtrack? Who Run the World (Girls) Hell yeah, and tell you what, if Beyoncé was a Gymbox member she’d be all over this. Although she’d likely baulk at the  name, surely there are plenty more empowering animals than bunnies?

Taught by Michelle Peak, who is enthusiastic, funny and definitely not a Playmate (and I mean that in the best possible way), the 45-minute routine mixes high-energy dance moves, toning and strength work with a bit of boxing thrown in for good measure. All done with a raunchy, tongue in cheek twist. Bet you never knew you could make a squat sexy, or that you’d even want to. But you can (well, you can if you’re a better dancer than me anyway).

Michelle choreographed the class herself with input from the Playboy team – yep, she got to go the Playboy mansion. (Apparently the Playmates are very nice and surprisingly natural. As for their career choice, hey each to their own.) and describes BB as a bit like Zumba. Well it’s like Zumba as in it’s a fun, choreographed routine but I’d say it’s definitely a much tougher workout, more in the vein of Les Mills Body Attack. I’m not generally a sweater but I was a dripping mess by the end. Don’t think Hef would have approved. 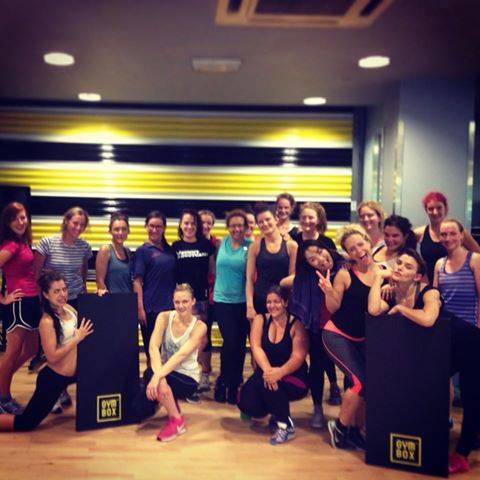 A real class, no bunny ears or diamante in sight

The class started with a couple of warm-up tracks, introducing us to some of the dance moves (don’t worry if you can’t pick them up straight away, the basic routine stays the same for a few weeks so you can really get the hang of it) before moving on to high-intensity tracks combining high knees, punches, kicks and tush shaking with toning squats, lunges and other strength work. There are also signature bunny moves throughout including a ‘Bunny Dip’, a move the Bunnies do when serving drinks in Playboy clubs. Hmmmm, hmmmm and hmm to the servile nature of that one, but the rest of it was great. Then it was down on the floor for abs and ass routines (and they hurt!) before cooling down and stretching it all out.

By the end, everyone was drenched, everyone was smiling, and no one had sprouted double Ds. I cut my fitness teeth on 90s aerobics classes and I’m a sucker for a good old pumping soundtrack and well-choreographed routine, so while I wanted to hate this class with every feminist bone in my body, I simply couldn’t. I was buzzing. Forget any preconceptions you may have, this workout celebrates rather than objectifies women. I just wish it didn’t have to hang itself on the Playboy brand that’s all. Yes, it may not have got so much publicity but at least I wouldn’t be embarrassed to admit how much I bloody loved it.

So let’s call it Michelle’s bootcamp should we, go along, leave your inhibitions in your locker along with your chihuahua (jokes) and strut your stuff. You might feel self-conscious at first but believe me, before the class is out you’ll be whooping with the best of them.

Bunny Bootcamp is currently exclusive to Gymbox. Classes will be rolled out across the country later in the year. www.bunnybootcamp.co.uk