So Run to the Beat are refunding £10 to everyone who ran after hold ups, timing problems, bottle necks and general chaos on the course. What was it like to run it? For me, not too bad actually, for my friends… kind of rubbish.

What: Run to the Beat half marathon

Back in 2009, Run to the Beat was my first ever half marathon. It was a freakishly hot day, I’d only trained up to 8 miles, my iPod broke, the course was hilly, the music was rubbish. I hated every painful second of it. I never wanted to run again.

Four years and a few half marathons later, I thought I’d face my nemesis and see how it had changed. And it had, in some ways for the better in others for the worse. The biggest change is that Nike now sponsor the race and have done since 2011. Well, that and the fact  it now costs £50. This does mean you get a rather swanky technical t-shirt with your race number ready printed though. It also means that at the end you get a concert. This year the big act, revealed on the morning, was Jessie J. Not bad if you like that sort of thing. 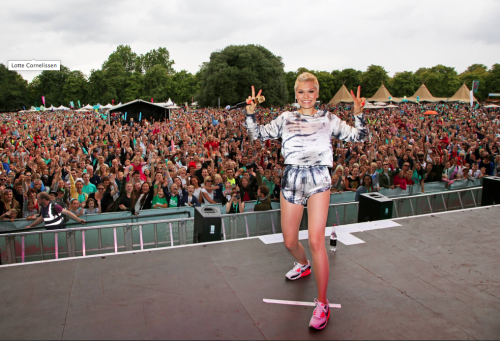 Let’s start with the race itself though should we, as that’s the most important bit. And while the concerts and tweet screens are nice and that, maybe the organisers should spend a bit more time thinking about the race too.

This year the start had moved from the O2 to Greenwich Park, a more open, prettier spot and way better for spectators. We (Charlotte, Ange and Claire) decided to save our legs and take a taxi as it’s a bit of a walk from the nearest stations. We ended up getting to the race site early. This was a good call, rows and rows of empty portaloos. Amazing! We put our bags in with no queue, hoped we didn’t collapse as the sticky bit on our next-of-kin wristbands covered all the information, did a quick warm up with the Nike Master trainers. So far, so smooth-ish. 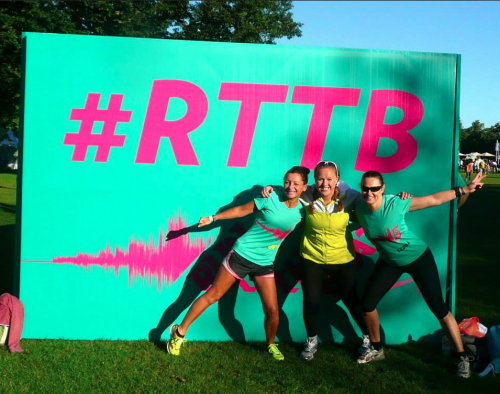 Then we took to our start pens. I was in yellow (two pens from the front), the guys were a pen behind in black. We were due to start at 9.45 am and had been told to get into our pens quickly as we would be leaving on the dot. We didn’t. We waited for 20 plus minutes before we set off with no information on the hold up. To be honest though, i didn’t really care. I’d had quite a few big nights out in the week, hadn’t slept well and was shattered. I fell asleep standing up till someone tapped me on the arm and I opened my eyes to see everyone setting off. Whoops.

As you may have noticed, I wasn’t aiming for a pb. I’ve just started training for another half at the end of October and have only done a couple of slow nine milers. I was taking it as my steady Sunday run albeit with 18,999 fellow runners and was just out to enjoy it.

And if i hadn’t been so hallucinatingly tired I probably would have done. There were niggles like getting water in cups rather than bottles so you had to stop to drink, the course was very narrow in places making it hard to overtake and there was an annoying tight hairpin bend into a courtyard at the barracks at mile four where everyone got bunched up and jostled about before being handed the ‘sports’ drink Vita Coco. i never have sports drinks but if you’re after a sugar or caffeine hit, Vita Coco ain’t it. But I wasn’t running for a time. I was just on a long easy run and it was perfect sunny yet cool weather. if I’d been trained and raring to go not being able to get past people would have bothered me more but where I was in the race it wasn’t too bad.

The music along the course was crap but I’d expected this after last time. 18 burger vans playing ghetto blasters you hear for about 10 seconds. You get a lot more support and entertainment (unofficial and otherwise) on a course like the Great North Run. But i was just ploughing on, tired and ready to get to the finish not really listening to the music. Supporters on the course were patchy but when they were there they were great. 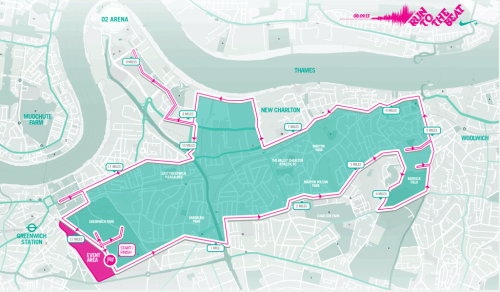 I didn’t even mind the never-ending humongous beast of a hill at mile 12 – hey, you’ve got to earn that medal, right? Apparently on last year’s course you ran down it, which admittedly does sound preferable. There were a lot of people walking obviously exhausted but a course is a course they can’t all end nicely.

I finished, I was glad of the fact. Got a pretty medal, no banana or goody bag though (I was starving) and had to wait quite a while for water – it’s the first thing you want not Vita Coco or removing your timing chip people! Picked my bag up. Went to sit down and wait for my mates. And wait, and wait.

The tiny little wiggle to the barracks that caused all the problems. Note it’s located by Ha-ha road!

Seems the little things that had annoyed me on the course had become a lot bigger, much more annoying things as time went on. In particular that hairpin entrance at mile four. Rather than a bit of a crush and jostle it had become a complete standstill with runners being held up for up to 10 minutes just to enter a courtyard, grab some Vita Coco and run back out again – a distance of around 400m. In fact, when Claire came out, marshalls were directing the runners straight past the barracks cutting out that part of the course entirely. So basically you had the choice of getting stuck in a crowd or running short, meaning everyone’s times from further back in the field were pretty much screwed.

When my mates eventually finished they had to deal with a nightmare at baggage collection – it had started to rain at this point and people were hungry and desperate for their jumpers but even though there wasn’t a huge queue when Angela got in (6.5 minutes of waiting at the barracks on her watch) it took 20 minutes for them to find her bag. Those who got there a little later, including Claire, were waiting up to an hour as bags seemed to have been mixed up in a random order regardless of the number on them. 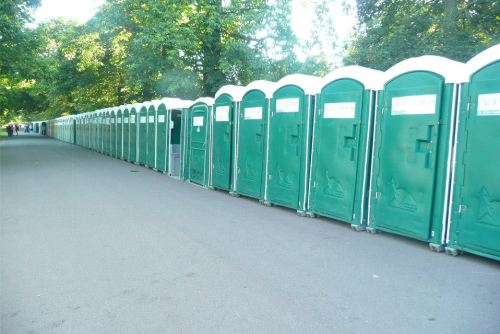 Never seen this at a race before!

When we eventually all had our bags, everyone was a bit grumpy, a bit pissed off and ready for the pub. We’ve all done a fair few halves so just chalked this down to experience and the general conclusion that smaller races are better. If I compare this to my first Run to The Beat though, despite my horrendous tiredness and the congestion, this was still a better experience. I didn’t wear a Topshop vest and get huge chafe marks under my arms for a start. Angela and Claire and thousands of other people would say differently though, When I asked them for comments I got a two page document back. I’ll leave you with a few from them and a few from Twitter below. Feel free to add your own. Particularly if you were in the front pens, as it would be interesting to know how your experience differed. And if you enjoyed it as I’m sure lots of people did.

Organisers Nike and IMG Challenger World have acknowledged the problems and are offering £10 refund to all participants. Emails will be sent out automatically.

I had to walk up most of that hill, my knees couldn’t take it. Overall enjoyed the race though. Huge PB for me: 2.02 (10mins off my last time). If only i didn’t have to stop in congestion for 3mins… Zoe

That hill was was a killer! @Coxwolds words of ‘pain management’ from wed night really came in handy there! Katy

Atmosphere great, music a bit meh (apart from Jessie J who was great) and bad bottleneck at mile 4 which cost runners mins Sarah

Music on course was minimal and largely uninspiring, and felt a lesser offering that last year’s event – only a few were DJs, and two of those that I passed were not even playing, the remainder consisted of a speaker system hooked up to an iPod. Angela

That wasn’t a hill it was a mountain! Liz

30minute delay to the start without any communication, I was probably stuck at the barracks gate for 10mins in total but people further back were stuck for 15! And don’t even get me started on the farce that was the bag collection!!! Helena

One of my clients got stuck in a crowd at mile 4 for ten mins!! Gutted for her when she trained her butt off over the summer Katie

Narrow course on leaving the park through gates and along path which became dangerous for runners, I witnessed one accident within the first mile.  Angela

The weather, stage, village, support and t-shirt were great, the barracks loop, dangerously narrow course, baggage collection and water being scooped into cups from bucket by hand (yuck) not so great. When i came out of the barracks after waiting around seven minutes to get in people were being directed straight past it. Plus, no banana. Claire

Race finish was chaotic – first thing people want is fluid and to get to an area to stretch/warm clothes – took over 5 mins to get through ‘tunnel’. Angela

PS. If this was your first race and you didn’t enjoy it don’t let it put you off. I hated it the first time I did it and when I ran Royal Parks two weeks later I had so much fun I couldn’t wait to do it again. Keep on running!

There is absolutely no occasion where animal print is not the best option. Wear this top to the gym and look cool as fug.