OK, I admit it. I’m vegan. And I hate telling people because they think you’re just a fussy eater. I don’t really mind what you eat, your choice, but this is mine and, in answer to the questions I always get asked – this is what I eat! 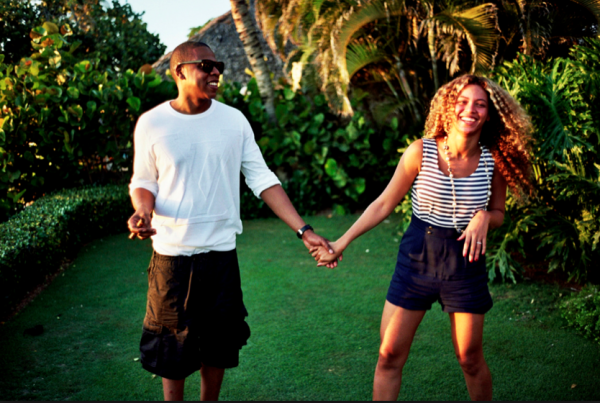 I know, I know, they say imitation is the sincerest form of flattery – but seriously Beyoncé, this needs to stop! First you start writing songs about me – Bills, Bills, Bills and Bootylicious being the first that spring to mind – and now you go and copy my diet too!

Come on girl, I know you covet my pancake ass but a booty like this didn’t just come about through a decade of veganism. You need to put in a bit more work at the local gin palace and chow down on daily packets of salt and vinegar square crisps to reach this level of hotness.

Last year, in order to get her frankly already magnificent body and Jay Z’s, well, normal one, in shape for Mr Beyoncé’s 44th birthday, the couple embarked on 22 days of vegan eating – described by The Vegan Society as a plant-based diet, with nothing coming from animals – no meat, milk, eggs or honey, for example.

A vegan diet (well, as long as you don’t just eat chips) is great for lowering blood pressure and the risk of heart disease, is vitamin, antioxidant and nutrient dense and, probably the reason B&J chose it, it’s generally low in saturated fat and refined sugar so helps keep you trim. Adult vegans have a much lower risk of obesity than meat eaters.

The Knowles-Carters aren’t the only slebs to give it a bash, Natalie Portman, Pamela Anderson, ultra runner Scott Jurek, Mike Tyson (yes, really) Venus and Serena Williams also follow an animal-free diet for a number of health and environmental reasons. And it seems more and more people are adding in a few meat-free meals each week – there was a 40% increase in those signing up to take part in Vegan Month in 2013 and thousands of people have opted to try out Veganuary – following a plant-based diet for 31 days.

Frankly, this picture is weird

I’ve been vegan for around 11 years now (veggie for 24) and while I really couldn’t give a stuff what you eat on the whole, there’s no harm in a meat-free meal or two. Our ancestors ate meat but they hunted and ate for survival, they didn’t have it every meal. With modern factory farming and the proliferation of cheap meat products we could eat a meat-laden breakfast, lunch and dinner if we wanted, with a few Peparamis and some beef jerky thrown in for good measure. But cholesterol-busting facts aside, factory farmed animals don’t exactly have a great life and are often pumped full of hormones and chemicals that we, in turn, put into our bodies. Nice. Cheap meat, as you all already know, is a load of pants.

Anyway, enough of the worthy shit, if you do decide to give vegan meals a whirl I thought I’d give you an insight into the questions you will inevitably get asked and show you what I eat each day.

Oh and if you want to know the environmental arguments behind eating less animal products there’s loads of info on the Vegan Society website (bit worthy) and the much more fun Veganuary website, as well as some recipes and stuff.

The questions you will undoubtedly be asked if you go vegan, even for a bit:

So why are you vegan? Is it an ethical thing? 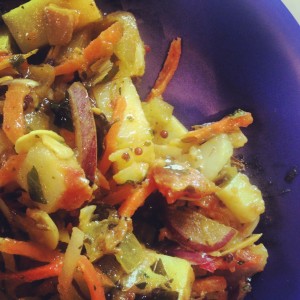 I never really liked the texture of meat, it made me feel a bit squeamish – dry chicken kind of flakes in your mouth like wings, bleurgh – and when I went on holiday to France and saw a field of sheep being taken away for slaughter, I thought, na, killing things and eating them ain’t really my bag. So I stopped. As for seafood, those frozen prawns you got in the 80s looked so much like foetuses I never dared put one in my mouth.

I became vegan in 2003 after I went on some Carol Vorderman detox diet that excluded dairy and eggs. Detox was all the rage in them days, not sure what Carol’s dietetic qualifications were but hey ho. I only intended to do it for a month but I never ate it again, didn’t really fancy it. We all know about factory chickens but if you read about cows being kept artificially pregnant for most of their life and having calves taken away at birth so we can drink their milk, it does kind of put you off.

Does it bother you if I eat meat in front of you? 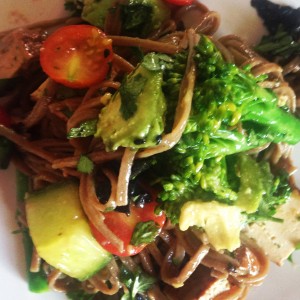 Nope, not one jot. The reason I rarely tell people about my diet, unless I have to, is that I just can’t be arsed with the questions/arguments that ensue. You eat what you want to eat, I’ll eat what I want to eat, job’s a good ‘un. I hate preachy vegetarians as much as the next person, they make me want to chow down on raw steak in their face (it’d be a tofu steak but no need to tell them that). That said, I also hate people who tell me I should eat meat and dairy, in this case I would make them eat the tofu steak then punch them in the nose with a raw mushroom. Yeah, I’m ve-gangsta.

I could never be vegan, I couldn’t live without cheese.

You probably could. Personally I stopped liking milk when I went to primary school and though I was a cheese-fiend as a toddler (my mum used to find bite marks out of the cheddar) I went off it as I grew up, so no real hardship. There is a school of thought that says we don’t need to drink cow’s milk after childhood and many races, such as Asians and Native Americans, lose the ability to digest lactose between the ages of two and five*. The only thing I’d say I missed at first was feta baked in the oven and tatziki – I lived in Greece for a while – but nowadays there are loads of vegan cheeses out there, some good (I think No Muh is the best), some that taste like sick. There are also tons of vegan meat substitutes and so many different milks – oat, almond, rice, hazelnut, coconut, soy, flavoured – if you so desire you can substitute nearly everything. Although, unless you’re baking or eating chocolate ones, I must say I haven’t seen a vegan egg. I think this is a good thing.

Aren’t you missing out on proteins and vitamins? 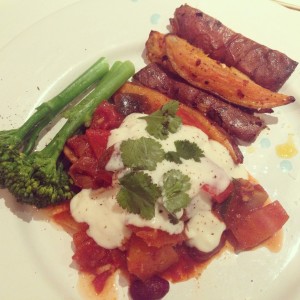 I don’t really take supplements, I try and get everything I need from my diet. Protein is easy – pulses, beans, soy, seeds, quinoa etc. Vegans can be deficient in B12, found in fish and meat, especially liver, but you can get this from Marmite, which I LOVE, or supplements. As for essential omega 3 fats, from oily fish, these can come through including rapeseed oil, linseeds and walnuts in your diet.

Recently, though, I have started taking Vegamega omega 3 tablets, the main reason being I got them free in a goody bag from The NutriCentre. They’re made from the marine algae fish feed on. So far I haven’t seen any noticeable effect, good or bad, but then I suppose you probably wouldn’t unless you were very deficient so I might keep taking them, can’t do any harm. 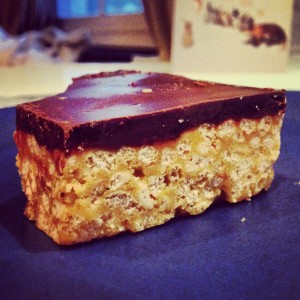 Friends always panic when they invite you round for dinner but Google vegan recipes and you’ll see there are hundreds of things you can make very easily, most don’t require any special ingredients (wheat pasta, stir fries, curries, chillis, tagines) and you probably eat them often yourself without even realising. If in doubt, hummus and salt and pepper Kettle chips is always a winner.

Eating out can be a bit tougher at first, you need to know what sort of things you can and can’t eat (I hate making a fuss about dietary requirements in restaurants as I don’t like spit in my food) but veggie restaurants, Turkish, Lebanese, Japanese (watch out for fish sauce) and Indian (made with oil not ghee) tend to be the easy choices. And living in London helps, you can get pretty much anything here (if you live in France you’re fucked). You may be stumped on desserts but sorbet, fruit salad or summer pudding tend to be winners, just double check for milk with the waiter.

Yeah, you do have to check labels in supermarkets and shops but if you go for natural where possible it’s not a problem, and once you look at the ingredients on many ready-made foods it’ll put you off anyway. Below are a few pictures of some of the things I ate last week. See, pretty normal. I’m not proclaiming I eat super healthy or in any way ‘better’, far too many crisps and chocolate for that, I’m just saying I eat this shizz. I skipped a few meals in favour of booze and comfort ate as I was ill, usually my meals would be more varied and feature a lot more green (honest!). But as long as you mainline on the veg not the meat and dairy substitutes, vegan meals tend to be healthy, nutrient-rich, low in saturated fat, high in fibre and vitamin packed, so who gives a shit if you have a biscuit or two (hob nobs, ginger nuts and some bourbons as you’re asking)? Try it, you never know.

Just some of the shizz i eat 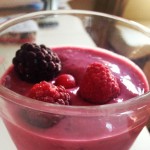 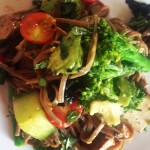 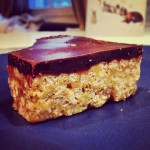 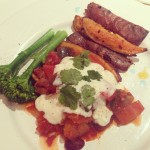 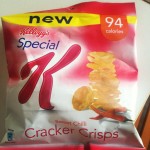 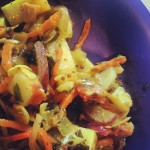 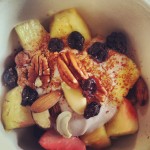 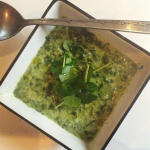 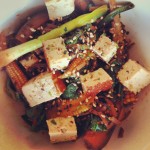 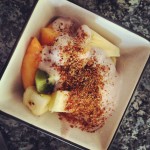 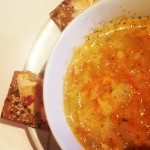 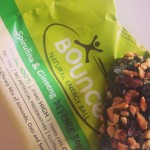 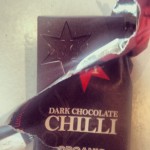 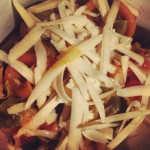 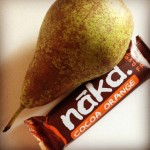 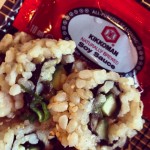 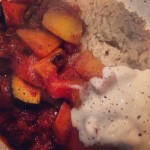 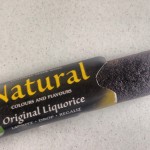 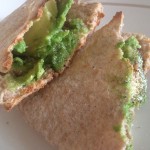 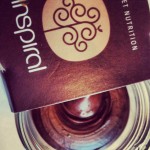 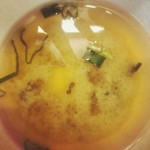 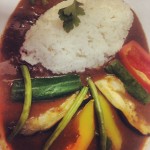 Interesting vegan fact of the day
Beef and tomato pot noodle is, in fact, vegan. And there you were thinking it featured the finest fillet steak eh?

We’ve been sporting a few different pairs of runners this month, from super-light Saucony Kinvaras to the female-specific Puma Faas 600S, and Liberty-print Nike…