9am GMT, secret location in North London, mission not impossible

A few weeks ago on a sunny day in London, myself and co-spy Special Agent Green made our way to a secret North London location (ok Highgate Woods) to receive our latest mission. Along with five other undercover agents we gathered at HQ for our briefing.

The mission, should we choose to accept it, to infiltrate an enemy camp in the woods. The dirty rascals had bedded down somewhere among the dense forestation and were hiding encrypted codes we needed to locate and decipher before reporting back to base camp.

The drawback? Enemy guards were patrolling the area. Capture would mean 15 minutes of torture as they tried to break us. Codes would also self-destruct if we didn’t find them within 45 minutes, the mission would be aborted.

Ready to take the enemy down we ran into the woods, each agent for themselves. Five minutes in and I heard the beep of a radio. Heart beating fast I ducked into the trees. Spotting a guard patrolling the main path in the distance I hit the deck, crawling as silently as possible – as any agent knows, snapping twigs are a dead giveaway. 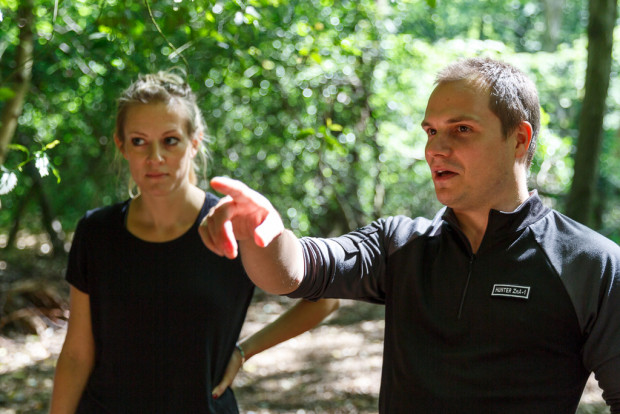 It soon became clear that there were three guards, all patrolling the main pathways. The camp had to be somewhere in the middle, but how to get past the one blocking my way? I watched to work out his route, knowing the only way to pass was make a run for it when he turned and changed direction. Jumping up I made it across the path and into the dense undergrowth on the other side. Fuck me I’m an amazing spy.

Following pre-briefing instructions, I was clad in black to help avoid detection. A fellow agent had failed to prepare and was wearing hot pink. I spotted her hiding among some trees, unfortunately so did a guard. I watched as she was captured and led away to the torture zone. Another one bites the dust.

Not having taken a special agent course in orientation I plundered through the undergrowth not exactly sure where I was headed, passing guards along the way. As I crouched low one stood right in front of me staring into the bush I was using as cover. Luckily detection was avoided and eventually I stumbled across the camouflaged enemy camp in a small clearing. I entered their tent to find a tablet. Cracking the computer’s security as we’d be shown, the code was within my grasp, but it was taking an age to download, every second bringing me closer to capture. As it pinged on the screen, I let out a sigh of relief, memorised it and sweaty palmed aimed for HQ.

Unfortunately all this subterfuge had left me a little disorientated. I managed to avoid the guards but somehow found myself near a suburban street. I interrogated a passing dog walker for directions (did she not know the danger lurking near by?) and made it back to HQ with 4 seconds to spare. Four of my fellow agents had been captured, three of us had made it. Special Agent Green cracked the mission in just 10 minutes (smug bastard).

So why was I doing this? Well it was a taster of a new strategic adventure experience called HQ recon. Combining cross-country running with tactical reconnaissance, the three and a half hour events are held in wooded areas. You run around one mile to special zones and try to uncover the codes while avoiding capture by hiding in woodland and undergrowth. The aim is to crack as many zones as you can – there are 10 in the bigger events – for points and cash prizes. And, as they say, this is one race where the smart can definitely outrun the fast. Although if you manage all 10 zones then you should seriously consider a career in the secret services, the average is three to four. On paper it may sound complicated but once you get going it’s easy to understand and you can’t help getting in to character or getting a huge adrenaline hit when you spot a guard. Ducking and crawling through trees and sprinting across paths is surprisingly hard on the old legs and SO MUCH FUN! 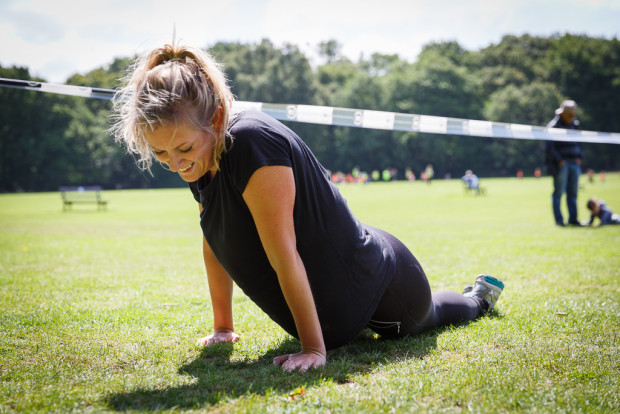 As for the old torture element, well they made us try that too to get the whole experience. No nail pulling or electric cables applied to your bits here though. Instead you receive a 15-minute military-style beasting from an ex-Royal Marine. This involves static poses such as planks and prison squats until you drop and some nasty high-intensity cardio –sprints, burpees etc. Oh and possibly the most horrid exercise I have ever tried, dead leg crawls – crawling along the ground without using your legs. As the owner of the world’s weakest arms, I found this nigh on impossible.

The next HQrecon events are in Bristol on 31 August and Hampshire on 25 October and I would definitely recommend, they’d be great to do with a group of mates. Kind of thing I’d like to do on a hen do or birthday (but I’m strange like that). Oh and they advise you wear leggings or tights. I ignored them and wore shorts as it was 30 degrees. Mistake, trees and bushes scratch to buggery but my war wounds did make me feel pretty darn hard.

If you like running with friends, spa hotels, new kit and peanut butter, then this could be one of the best competitions you’ve come across. Seriously.