After volunteering with A Mile in Her Shoes over Christmas, Charlotte spoke to founder Nicola Miller to discover how the charity is helping homeless women find their feet through running.

So this Christmas I ate a tree’s worth of Twiglets, drank a lake of wine and watched far too much rubbish telly. But in between all the eating, drinking and sitting on my ass, I also helped out at a Crisis at Christmas shelter with the fab charity A Mile In her Shoes.

Aimed at helping homeless women find their feet through running, the charity offers running fitness sessions at shelters and centres across the capital. When I mentioned the fact I was going along to a friend he said, ‘surely these women have more important things to be thinking about than running’. Well yes, but that’s kind of the point. Getting out there for a bit of exercise and having a laugh and a chat with the other participants helps take your mind off things. How many times have you been stressed, gone for a run and felt much better about it? Exactly.

With the exception of their domestic situation, the women who came along on the day were just like every other woman who goes running, they want to stay fit, lose weight, feel better about themselves and enjoy exercise, and A Mile in Their Shoes is helping them do that. I had a wicked day, met some wicked women and am now going to be volunteering on a more permanent basis. So I spoke to founder, Nicola Miller, about the ideas and aims behind the project and the ways that you can help.

Charity founder Nicola Miller with just some of the donated kit

I decided I wanted to do something to help homeless women in 2012. I was volunteering at a Crisis centre over Christmas, and although I felt like I was doing some good being there, I came away thinking I wanted to do so much more. I just didn’t know what or how I could help.

The idea of setting up running fitness groups came about gradually. I’ve been running myself since 2005 and had just joined a club in Ealing, where I live. I’d always been a solo runner but found I loved the camaraderie and support of running with a group and the fact that there were all different types of people and abilities involved, new mums, beginners, seasoned runners, a wide range of ages and body types. Running had helped me make new friends from lots of different social circles and feel part of a community, it helped me destress, improve my confidence and self esteem and I just thought, you know what, this could work.

Yes running may not be the obvious choice when you think about helping women who are living in shelters or at risk of homelessness but when I thought about it more – all the physical and psychological benefits, the fact that it’s free, you need no equipment and almost anyone can do it – I realised it was the perfect fit.

To see if it was a viable idea I spoke to homeless charities and ran a focus group with women with housing issues. The feedback was overwhelmingly positive. Most of the women I spoke to said that although there were sporting opportunities available at homeless centres, they were mainly targeted at men with a heavy emphasis on football. While women were free to join in, cultural sensitivities, the fact that many of them had suffered domestic violence or simply didn’t want to run around sweating infront of a load of guys, often stopped them taking part. While all of the women in the focus group said they’d be interested to give running a try, they did make me aware of a few barriers too, some ­– such as not having kit or the money to go out and buy it – I had anticipated, but others, like worrying that exercising would make you hungry and you couldn’t afford to eat more food, were things I just never considered.

With the input from the focus groups and homeless charities the idea started to take shape and A Mile in Her Shoes was formed. 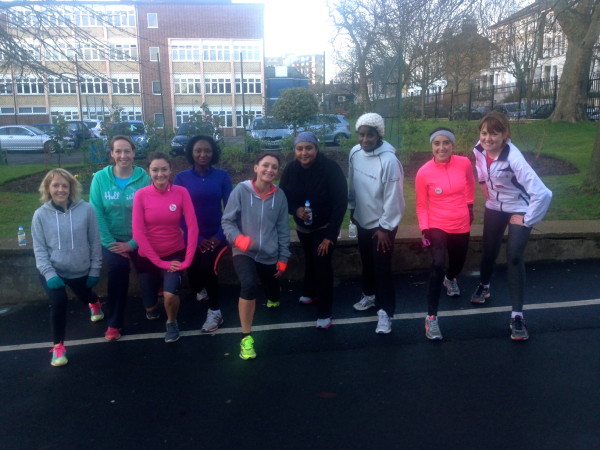 All smiles after a Christmas session

After taking a leadership in running course and asking for trainer and running gear donations so we could kit out the women (big thanks to the female running community on Twitter who have been amazingly supportive with kit donations!) in September we decided to run a pilot scheme from the Crisis Skylight Centre in East London. As well as providing kit, following the focus groups we also decided to provide healthy snacks such as fruit and cereal bars afterwards so that runners wouldn’t need to worry about going hungry.

I have to admit I was so nervous before taking the first session, however much you think you don’t have preconceived ideas of homeless people, it’s likely you do. I was worried that they wouldn’t listen, I was worried what they’d think of me, would I come across as a do-gooder? How would I cater to all the different abilities? I worried about everything. I practiced the session with my friends first and thought it had gone terribly, but they all loved it. And when I ran the first pilot, the guys loved it too. We set out with a short steady jog to an open space and then played some running games so that all abilities could join in and no one got left behind. The games are always the bit everyone seems to enjoy most – relays, running in a snake formation, tag, it gets everyone laughing and interacting.

Due to their situation, the women who join us can’t necessarily commit to all sessions, they may be sleeping in different shelters or on friend’s couches so don’t know where they’ll be from one day to the next, but almost all have come back when they can and, most importantly, the feedback has been amazing. Women have told me that running helps them deal with anger and stress, it makes them feel on top of the world, and means they can talk to other people in the group as some participants don’t get much opportunity to mix with others. As one woman put it, ‘when you’re homeless, you’re dealing with so many things such as depression and getting yourself out of your situation that you can’t concentrate on anything else. It’s good to have something to get away from those issues and bond with other women.’

The numbers we get at sessions can vary from one person to 10 but the pilot scheme has helped us discover the best times and days to run groups and what participants want to get from them. This year we’re looking at setting up more sessions in different London locations. It’s still early days but ultimately it would be great to have groups across the country and I’d love to enter those who’d like to challenge themselves into a 5k race. Races and expansion aside though, the best bit about A Mile in her Shoes for me has been meeting so many interesting women, when you’re out for a run together you forget about your different situations, everyone’s in it together and that’s the whole idea. At the end of the day, we’re all equal.

How can you help?

Volunteering
At the moment Nicola, the other charity trustees and committee members have full time jobs so fitting everything in can be hard. Many groups are held in the daytime so they’re keen on hearing from those with flexible working hours who are interested in helping with sessions (particularly if you have a LRF qualification). They’d also love to hear from anyone who would like to help out on the charity and admin side of things or has skills they think could help and would like to become a committee member. To find out more, drop Nicola a line at run@amileinhershoes.co.uk

Kit donations
A Mile in Her Shoes kits out all runners with trainers and gear and they’re always looking for donations. If you have any kit or running shoes you no longer want you can donate it by posting to Nicola Miller Head of PR, c/o London South Bank University, 103 Borough Road, London SE1 0AA (or you can email Nicola and arrange to drop it off if you live near by). The kit must be in good condition – something you’d be happy to buy from a charity shop – and they are particularly desperate for long sleeved tops, long running tights, winter gear and larger sizes. Small men’s sizes that would fit size 16 and up would also be great. In the future, the charity may sell some donations on eBay and set up pop-up kit shops to raise money.

Raising money
If you would like to run a race and raise sponsorship for A Mile in Her Shoes they’d be very happy for you to do so. Email run@amileinhershoes.co.uk for more details.

Forget cream-drenched set menus in crowded restaurants, enjoy this quick and healthy Valentine’s day feast with the one you love (especially if the one…