Whether you’re building up to your first mile or training for a marathon, running can be hard work – but we love it. We caught up with Paula Radcliffe and asked her for her top running tips. Now we’re just off to smash that world record.

She’s world record holder for the women’s marathon (2:15:25, London, 2003 – sheesh!), a former half marathon and cross country world champion, and a very lovely lady to boot. If you’re going to ask anyone for tips about running, it may as well be Paula Radcliffe MBE eh? We chatted to her at the Nike Flyknit Experience. 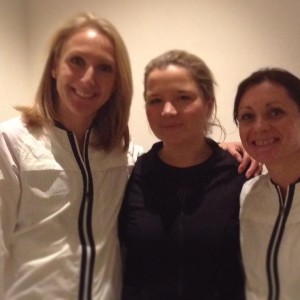 The first step is the most important step. That’s when you find out if running is something you like, something you’ll become passionate about. Make running an enjoyable experience – ensure you have comfortable kit, join a friendly run club or find others who are planning a race and train together so you have the best chance of achieving your goals.

I still get nervous before races. The day you’re not nervous is the day it doesn’t matter to you anymore. You just need to manage that nervous energy and make it work for you. I use visualisation and breathing techniques to keep nerves under control.

The most important running session

If you’re going to add one running session to your schedule I’d go for a varied pace session. This could be fartlek, hill running or intervals such as running hard for a minute, jogging for a minute and so on. This will give you massive returns in terms of running and improving your overall pace. 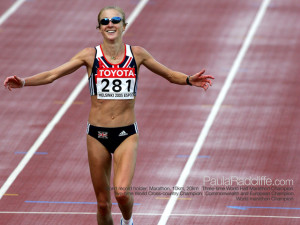 When the going gets tough

When things get tough, I count in my head. With running, like anything in life, thinking how far you’ve got to go to get to where you want to be can be overwhelming. It’s good to learn techniques that help you focus and concentrate on doing the best you can ‘right now’. For me that’s counting to 100 – over and over again.

New kit can give you a boost and make you feel good, as can listening to music and choosing a different or favourite route. Remember times when you’ve been injured or you want to run and you can’t – think how you felt then and how lucky you are to be able to run now.

The most important part of you when you’re running is your foot. You can dress up the rest of you however you like but if your feet aren’t strong and supported in the right way you’re going to get problems. I have customised racing shoes with an extra row of stitches across the front to hold my forefoot down, a couple of extra eyelets to hold it across the arch and a bit of extra padding in places. If you can, go and get some kind of gait analysis (available at good running shops) to see roughly what kind of runner you are and help you get the right shoe for you.

Being injured at the moment, I really miss running just for the fun of it. In off season, or for the first few runs after a marathon, I step outside without a watch and just ‘go for a run’. The best runs are often the ones where you aren’t looking at your watch all the way round, you’re just running.

Injury has always been the thing that would end my career, if it was up to me I’d race forever. If you’re injured put everything into your cross training – for me that’s usually aqua jogging, the elliptical trainer, Nordic ski machine or, my least favourite, the bike – and rehab so that when you do get back to running you get the most out of it.

The power of music

I have a playlist that I listen to before a race, and the great thing about marathons and some half marathons is they have ‘Power Zones’ pumping out tunes as you run past. In 2002 (Paula’s debut marathon in London where she won the women’s race in 2:18:56) a couple of my songs came up as I ran past the Power Zone and my miles splits were faster for that mile. It definitely gives you a boost.

If I run well in certain racing kit I’ll wear the same set all season through, even though I have six sets. I have lucky jewellery for race day, and racing pins I’ve had since I was 11. I think it’s less about luck more about ease and ritual.

Dark chocolate and a glass of red wine. I’ve got pleasures but I certainly don’t feel guilty about them.

You just need to look around when you set foot in the gym and one thing is immediately obvious.  The personal trainers are most likely…