The Vitality North London Half Marathon is perfectly timed if you’re training for a spring marathon, but is it true what they say about those hills? 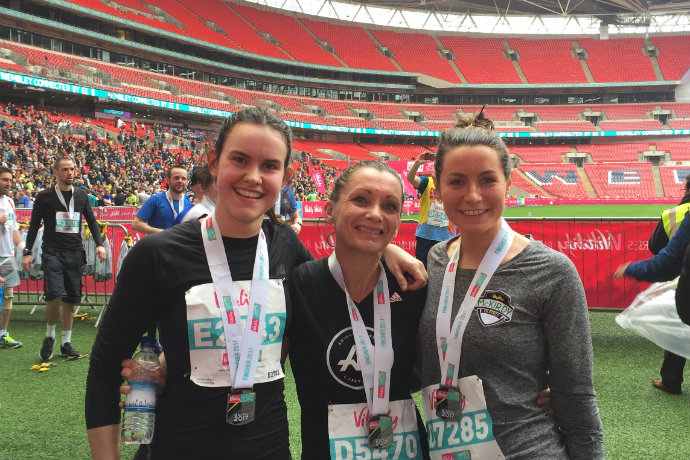 Bumped into these two at the end, Ces from Women’s Health and Charlie, The Runner Beans

Some half marathons are flat, fast and perfect for PBs; some have stunning views, amazing crowd support, or free wine (hello, Denbies)… The Vitality North London Half Marathon , however, is none of the above.

With entries from £38 for affiliated early bird it’s competitively priced for a closed road London race, but the route – which winds through the grey streets of suburban north London – is dull, hilly and grey, with very little to look at aside from dual carriageways and chicken shops.

That’s not to say it’s not a good race though, on the contrary. While it’s not the best route for atmosphere – crowd support is neglible – it’s superbly well organised and marshalled, easy to get to, and perfectly timed for a spring marathon warm up (it’s six weeks out from London). The finish line, inside Wembley stadium, is kind of cool too.

This Sunday, 12 March, was the NL Half’s third year, and my first year running it. 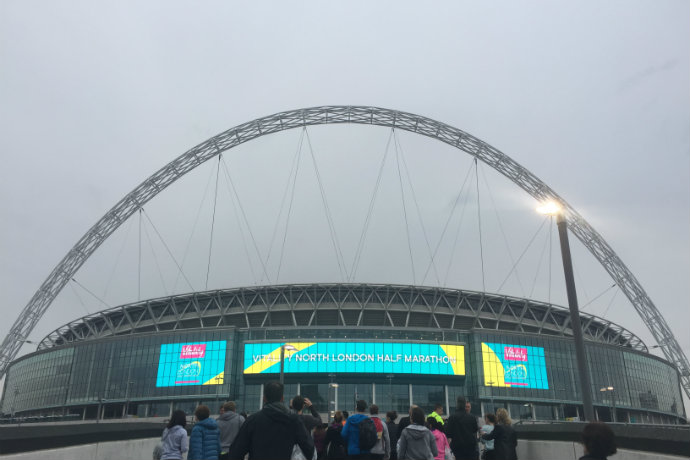 Who stole the colour from the sky?

Wembley is one of those places that take longer to get to than you think, meaning a 05:30 wake up call in order to eat, faff and get there an hour before the race started at 08:30 (8.30!!???). Least you’re home and finished by lunchtime though.

The weather was overcast and drizzly yet weirdly warm, which meant the industrial view getting off at Wembley North was bleaker than usual. But the stadium looked impressive, and anyway, this isn’t a race you do for the views.

As you’d expect from a venue used to hosting large events, organisation was slick, bag drop was seamless and toilets were plentiful (there were even some indoors with actual flushes!).

As I’ve only got five weeks of training in my legs I was planning to work on consistent pacing, stick to 8.30 min miles, and take it as a steady training run. I’m nowhere near as fast or fit as I’d like to be at this stage of marathon training, so there was no chance of a PB. I just wanted to enjoy it and get round in about 1.51, no pressure. That’s why I was surprised to find I was feeling weirdly nervous.

Why do I never get on these official start pictures?

As we got going, the nerves didn’t abate. In fact, I started to feel panicky. I’m not usually anxious but I realised the last time I’d run a road half marathon had been a year ago in Jerusalem.

In Jerusalem I had severe anaemia but didn’t know it, meaning I’d run for 30 seconds, feel knackered, struggle to breathe and my heart would go like the clappers. I’d walk, feel fine, try to run again and the same would happen. Though I hadn’t thought about it for a long time my body must have remembered and gone into self-protect mode.

Apart from the odd person nipping to the shop in their dressing gown, there there weren’t many supporters to take my mind off things, what there were though were hills, lots of hills. So I decided to concentrate on them instead. 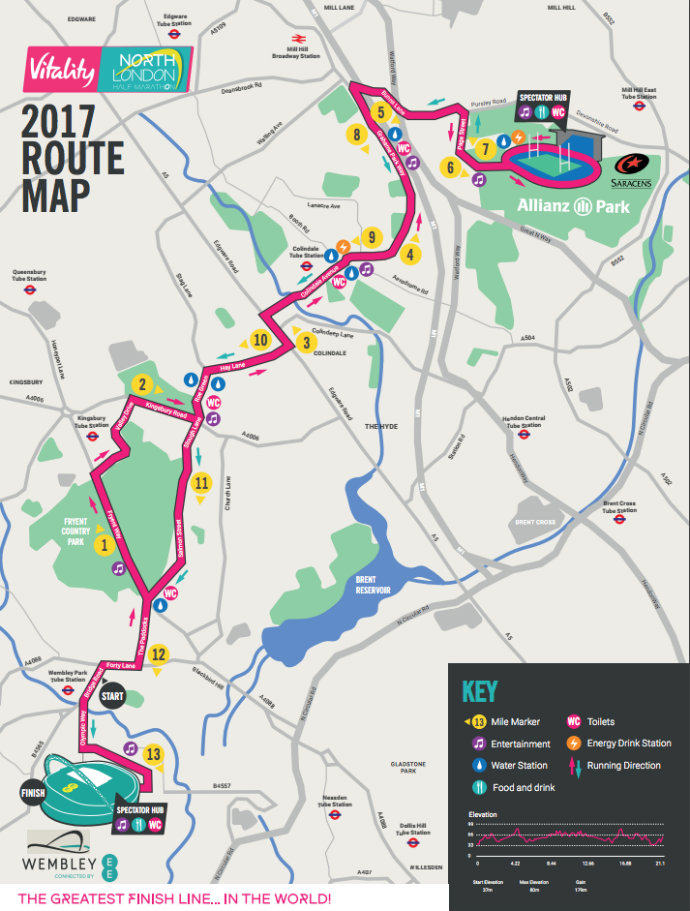 The first three miles seemed to just go up. Nothing too bad though, and hey, what goes up must come down. I quite like an undulating course it breaks it up a bit. What was pretty nasty mind, was that from around two miles onwards the route is out and back – so at mile three you could see Hay Lane, the absolute beast of an incline waiting for you at mile 10. Cruel.

Inclines aside, the route was little to write home about  – highlights included some welcome drummers on roundabouts, and running round Saracens rugby ground at the halfway point where your name flashed up on a big screen (got more excited than I should have by that). Despite a few road narrowings it never felt over crowded though, meaning you didn’t have to duck and weave adding extra mileage.

I figured the rest of the route must be downwards but no, rounding a corner at mile 12 what do you see? Another of those bastards.

Drinks stations were fab, with water every couple of miles, Lucozade and sweets at regular intervals. In fact, there were so many aid stations I had too much water and only managed to fit half a gel in, which I seriously regretted later.

The up and down course meant it was hard to monitor pace but two thirds in I’d talked myself out of stopping and blowing into a paper bag in the St John’s tent and decided to up the pace a bit. Oh yeah, but then that hill. That giant, mother fucker of a hill.

I’d got up the previous inclines without a problem – they’re really not as bad as people say – but the horror at mile 10 zapped any energy that half a gel had given me. Once I reached the top I figured the rest of the route must be downwards but no, rounding a corner at mile 12 what do you see? Another of those bastards.

If you’ve got enough training in your legs they should be challenging but fine. I hadn’t, they did for me.

This is not me. It’s Paul Whittaker, he won.

Around then kids appeared for high fives and the stadium started to loom like a mirage but with more than a mile still to go I knew there was going to be some round the houses until we got to it. Which sadist designed this course?!

The finish was worth it though, into the stadium to the sound of roaring crowds (some of it pre-recording and coming out of speakers admittedly) and a mercifully short run around the track to the finish.

At 1:50 it was a long way off a PB but bob on my target and I’m glad I got my road race demons out of the way ahead of London. I also learned it’s about time I invested in some new trainers as I’m getting rub spots, I need Vaseline under my sports bra, I’d rather have a cheaper race entry than the technical t-shirt we were given, and there’s no way I can run the full marathon at 8.30s this year.

On the plus side, my Sole socks are the best race socks ever, getting my bag back took all of three minutes and the goody bag had salt & vinegar pop chips in it! Winning.

Fancy pre-registering for The Vitality North London Half Marathon 2018? You can here.