Gluten-free, dairy-free, meat-free… If you’re on a diet that excludes certain food groups Christmas can be a bit of a bugger. Here are some great options for overindulging whatever your diet – there’s even a vegetarian turkey 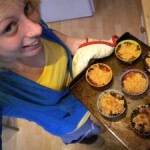 Mince pies, Christmas pudding, stuffing, pigs in blankets – festive food can be a minefield for those on a gluten free diet. Found in wheat, barley and rye, gluten is a protein present in many staple foods, and at Christmas time it can be tricky to find something half decent to eat. But fear not, because each and every year the choice gets better and this year, there are some pretty good gluten free products out there.

I suffer from coeliac disease, which means eating gluten can give me some serious symptoms such as bloating and stomach cramps – not to mention wearing down the lining of my small intestine. I was diagnosed more than 10 years ago, but since then I have noticed many people have started to avoid gluten due to intolerances, IBS, or just for general health reasons. After all, many weight loss and health experts recommend avoiding grains.

Luckily, much of the fresh Christmas staples – turkey, sprouts, vegetables, potatoes (generally the healthy stuff!) is naturally free from gluten. It’s when you come to the naughty treats that it gets a bit tricky. As far as gluten free mince pies are concerned, they are becoming pretty widely available. Genius mince pies are a great choice (and available at most supermarkets) but they’re high in sugar (20g per pie) so best to enjoy in moderation. Baked To Taste (available online) also offer a great range of mince pies and Christmas cake. For something sweet but without the sugar-heavy icing, opt for their fruit and nut topped cakes, which has the added bonus of some great, healthy fats.

If you want to try making pigs in blankets, try The Black Farmer’s Daughter’s chipolatas. Made with 90% pork, they’re a more gourmet type of sausage without being packed with bulking agents like cheaper brands. Stuffing is a tricky one to tackle, as it’s traditionally made with breadcrumbs, but Hale and Hearty make a great stuffing which is also milk, soy and nut free

Giftwise, chocolates can be a bit tricky, but if you’re giving a ‘gluten free-er’ some chocs (or fancy scoffing some yourself) Thorntons label their products clearly as gluten free, and Cadbury’s Roses and Quality Streets are both gluten free – so even those with coeliac disease can join in the festive gluttony!

There are plenty of great gluten free products out there, and if you’re watching your diet this festive season, avoid the treats and stick to the turkey! 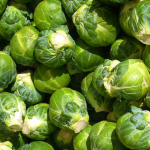 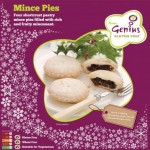 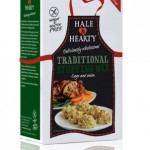 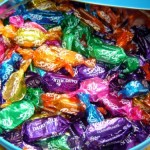 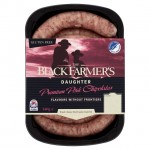 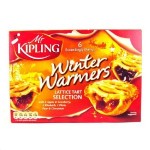 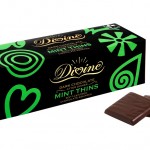 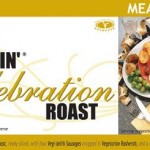 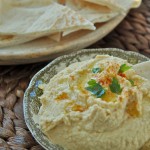 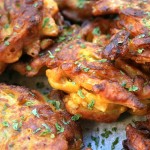 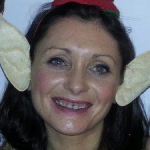 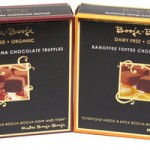 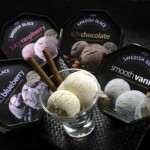 I’m always a bit embarrassed to say I’m vegan. Having the luxury to choose what I do and don’t eat does make me feel like a bit of a first-world wanker, and when it comes to Christmas, people often panic about what to feed vegans at parties. But actually, if we’re talking nibbles, it’s pretty easy. Olives, homous, pitta, most falafel, stuffed vine leaves, bruschetta… lots of meze-type snacks are vegan. If the party is more in the ‘Mum’s gone to Iceland’ mould, then onion bhajis, samosas and veg spring rolls tend to be free of animal products. Mmm bhajis. Maybe throw in some crudités too so you don’t get scurvy.

Christmas dinner-wise, obviously all the veg is vegan, as long as you use oil rather than butter to mash your spuds, but what about turkey and trimmings? Personally I’m not a fan of fake meat but, yes, you can get vegan ‘turkey’.  Check out the bad boy Celebration Roast from Redwood – a sliced turkey-style roast with gravy and a vegan version of pigs in blankets, £5.68, bargainous. Then there’s that old 90s favourite nut roast, your local health food shop will have plenty of options. Chez moi we usually just mainline on veg and rustle up a bit of stuffing (packet ones including the infamous Paxo are fine) chuck in a bit of onion for flavour and some chestnuts for protein, winner.  Or I’m quite fancying this Abel and Cole recipe, not your usual Christmas flavours but who cares, skip the yogurt side to make it vegan  and serve it with all the veg and gravy for a festive mash-up.

Mince pies you can go for the free-from option, Sainsbury’s are good for these, but you’ll find the supermarket ‘value’ ranges often substitute butter for dairy-free marg making them vegan. And cheap. Tesco’s Everyday Value mince pies are free from animal stuff and less than a quid for six, ditch the packet if you’ve got guests though. As an alternative to mince pies Mr Kipling’s winter warmer selection look pretty hot – they include apple and cranberry; rhubarb; plum, pear and cinnamon lattice pies.

It’s a bit late to start making a vegan Christmas cake but a crumble made with animal-free spread such as the widely available Pure instead of butter is a tasty alternative – does anyone actually like Christmas cake and pudding anyway? Serve with Swedish Glace dairy-free ice cream (available from most supermarkets and health food shops) or some Alpro Soya cream or custard. My favourite cake recipe at the moment is an apple and cider cake from Hugh Fearnley-Whittingstall, it uses vinegar rather than eggs to make it rise and it’s fit. Just swap the butter for Pure. You’ll find the recipe here. If you’re feeling healthy, fruit and sorbet is a lighter option.

One of the most upsetting Christmas experiences I’ve had in recent years is when they added butteroil to the previously vegan After Eights. I loved those slices of minty goodness. However, Tesco’s own brand are dairy free as are Divine’s After Dinner Mint Thins – they also do dark chocolate Christmas trees and coins, winner. That other retro classic, Elizabeth Shaw dark mint crisps are vegan – you know the ones you get in 70s-style restaurants – or you can go posh with Booja Booja raw truffles, available from Waitrose and health food shops in loads of flavours including ‘rum sozzled sultana’, man they’re good.

Word of warning though, don’t attempt a cheeseboard. Vegan cheese is utterly ming.

If you have any tips for Christmas on a special diet, let us know!