One random tweet and Hannah found herself cycling in Spain with world champion Marianne Vos. We’re finding it pretty hard to contain our jealousy right now.

Without a shadow of a doubt this has to have been one of the most surreal but amazing weeks ever, even if my posterior is protesting against that statement.

On Wednesday, I woke up in Spain (don’t worry I was aware I had travelled there) and descended on the small town that was to host me, four other female cyclists, and a certain world champion and Olympic gold medal-winning road Dutch cyclist, Marianne Vos, for the next three days.

So how exactly did I find myself in Spain, with undisputedly the best female cyclist currently in the world, a photographer, a film crew and Marit (road-trip organiser, cheer squad, friend, counsellor and mother to us all)? Well, quite simply, I responded to a tweet of Marianne’s asking people to join her on a road trip…  and three weeks later I was boarding a flight to Gerona.

The area surrounding Gerona is teaming with cyclists and it’s clear to see why. It has some of the most incredible roads and scenery and the weather is lovely most of the year round, and the few days we spent cycling were incredible. We all congregated on Wednesday and after a meet and greet as well as putting our stuff in the luxury apartment at Hotel Barcarola (the Van der Valk hotel group very kindly hosted us for the duration of our stay) and sorting out the bikes that Giant had lent us, we were ready to go for a ride! 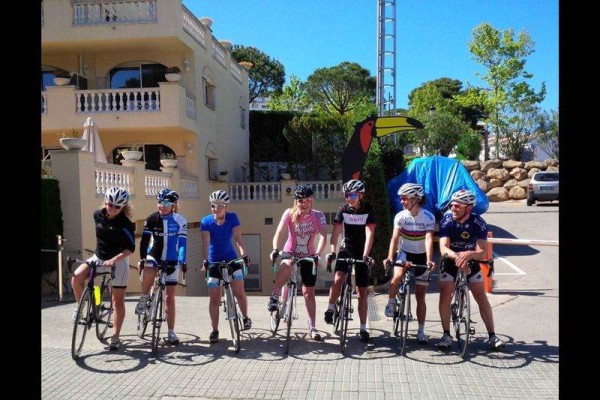 Marianne’s the one in the stripy jersey

I’m not sure I can accurately describe what it is like to go and do something you love in the most amazing of locations and then look to your right and find you’re riding alongside someone you consider an idol and an inspiration. The rainbow stripes (worn by the reigning world champion) are enough to make anyone terrified but then you look above the stripes and see the face of a smiling and chatty women who is more than happy to ride along at a less than punishing pace for her.

We had an easy ride on Wednesday as we spent most of the time chatting and learning that Spanish drivers are mental. Myself and Isla (the British representation) also had to learn to cycle on the right-hand side of the road, which I can assure you is much harder than it sounds.

Thursday was a day with lots of climbing, which tested the thighs, the backsides and our mental strength. 5km of climbing with a punishing and long 14% incline at the end was the hardest part of our trip but it was most certainly worth it as the sense of achievement was almost (but not quite) enough to make me want to do it again. We followed it up with a yoga session on the beach and a dip in the sea, which to our shock was much colder than we anticipated.

Friday’s ride was the longest but with the climbing downgraded from murder to manslaughter, it was an incredibly enjoyable day. We felt like we had been out all day, and we had, but after we reviewed the Garmin back at the apartment, we laughed at the fact we had been gone six hours but had only been moving for three and a half… turns out we like to take a long lunch and with our trip photographer wanting to get lots of good shots, we were clearly cycling slowly so that we could smile rather than grimace.

Having managed to get outfor a nice run along the coast before cycling on Thursday and Friday, Marianne told me over dinner to maybe give the run on Saturday morning a miss. This made us all nervous as a warning about me resting my legs could only mean one thing – hills! If there was a road with a climb along it, Marianne managed to sniff it out.

Our ride on Saturday was joined by a film crew from the UCI who hooked us up with GoPro cameras and had a film car either filming from behind (daunting angle) or in front (remember to smile). Hills were involved but given the area that wasn’t much of a surprise. We had a successful final ride and made it back to base camp before the clouds cast a shadow on Catalonia for the first time on our trip and it looked like it could actually rain.

Nope not at all jealous

I’m not sure that that even starts to sum up what an amazing few days I had away with some utterly incredible people. We all got on so well, which considering we were all strangers at the start of the trip was remarkable in itself.

Marianne is one of the loveliest people you could ever hope to meet and she made us all feel truly welcome and at home. I don’t know what I imagined her to be like and I don’t know why I thought she would be anything other than a normal human being but as we all sat around on our balcony or in the living room having a laugh and talking, you realise she is just a normal 26-year-old woman – well a normal 26-year-old woman with an incredible talent.

A place teaming with cyclists meant that a lot of people recognised Marianne and the rainbow stripes, which meant lots of cheering from cyclists passing in the opposite direction, pictures and strangers mistaking the rest of us as part of her team… as much as we would all love to pretend we are that good, riding alongside someone of Marianne’s calibre makes you realise how much training and dedication is involved in order to be as good as her! She will be pleased to know that none of us will be stealing her World Champion crown anytime soon.

Things I learned this week

Sunday
Competitive Easter egg hunt followed by a lot of eating!!!! Harder work than it sounds

Want to build muscle but don’t know a squat from a snatch? We’ve tried just the thing…GRAVITY.