It’s Halloween, yeah! So we sent our mate Jody out to try a running app where she got chased by zombies. Ha ha. We would have done it ourselves obviously, it just wasn’t compatible with our phone.

Yes, but what? A running app-meets-game in which you get chased by the living dead, forcing you to speed up and break into sprints throughout your run.

Jody, before zombies ate her

I cried with fear during the opening credits of The Shining and was almost hospitalised with terror after watching Nightmare on Elm Street, so my first thought when asked to review Zombies, Run! is ‘No.’ My second thought is ‘Oh, ok then.’

I download the app (sucking my teeth disapprovingly at the price), plug in my headphones and head out very early on a dark morning. Will my delicate sensibility ever recover from this experience? Before I’m even out of the stairwell, I’m plunged straight into the action with the realistic sounds of a helicopter circling overhead (the action happens on top of your music so you can still run to your favourite tunes).

A conversation between the helicopter’s two pilots describes my predicament: I am Runner 5, and my mission is to protect a place called Abel Township from zombie attack. This involves jogging around collecting supplies, then putting on the occasional burst of speed when the monsters close in. It’s enough plot to distract me from my sore hamstrings (is that why people stretch?) but not enough to send me careering into oncoming traffic.

It is dark, I am alone. But wait, what is this? A silhouetted figure is loping slowly towards me

As I round the corner of the first street towards a creepy ‘forest’ (actually the local Wetherspoons), all is deserted around me. It is dark, I am alone. But wait, what is this? A silhouetted figure is loping slowly towards me. I’m genuinely alarmed until I get close enough to spot a can of Special Brew in his hand. Phew, I’m only alone with the local sporadically violent drunk and not a fictional zombie after all!

As a series of increasingly fast beeps signals the first real zombie attack, the voices from the helicopter urge me to speed up and off I zoom, fleeing the monstrous noises as they get louder in my headphones, competing with the sounds of… Sexual Healing by Marvin Gaye. If you buy this app, you might want to put on some creepier tunes to enjoy the spooky effects more fully.

After 25 minutes and several successfully averted attacks, I trot happily back up my road, pretty much untraumatised and quite pleased with myself. The ‘about 30 minutes-long’ (you can also choose ‘about an hour’) episode seems to be coming to a close, the sun is rising and there’s really no such thing as the undead.

The peace lasts a few short seconds until I hear those familiar bleeps return – the zombies are coming back! Christ, haven’t they heard of arriving at work on time? I end up powering up and down the pavement outside my front door trying to escape the damn things until I almost puke. In the end I decide to switch the app off early and get in the shower.

If you’re less lazy I’m sure you’ll get a lot out of this app – you can do all sorts of advanced things online where you log in, play with other people and train for something called a ‘10K’. That’s not really my bag – I just want to go for a run. But Zombies, Run! Really did make me go faster and have more fun. When you think about it like that, £4.99 is (almost) a bargain. 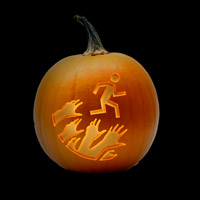 (Ever wondered what we look like? That’s Charlotte in the middle at the top. Hot huh?)

Meet the four L&L marathon bloggers each tackling the VLM in a very different way. Who else is running, let us know?!