They look damn hot but hey, looks aren’t everything. With a number of improvements and tweaks made since the first model, are the new Nike Flyknit Lunar2 the runners for you?

Looking for a new running shoe, it’s a bit like online dating isn’t it? (Come on bear with me, it’s nearly Valentine’s). You read all the specifications, click through pages of well-lit pictures and flattering angles, Google them to see if you can turn up any info they might be trying to hide… but, ultimately, you can never really tell if they’re the shoes for you until you meet them. Try them on for size, take them for that first trial run. Do they feel comfortable, are they a bit tight (never good), a bit loose (snigger) could these shoes take you the distance or are they going to cause too much pain in the long-term?

However many shoes I have in my arsenal, there’s always one that’s the favourite, the one I go back to time and time again, the one that joins me on all my long runs, sees me through the good races and the bad. The one I can never bear to part with even when I know it’s over, my toes are poking out the ends and I can feel every pebble through the sole. Last year, ‘the one’ for me was the Nike Flyknit Lunar.

It was good to see some of the niggly issues from the first Flyknit Lunar have been resolved.

I’d never run in Nike’s before, but my longstanding love affair with New Balance 890s was over and I was looking for something new and pretty. Supremely lightweight, great for neutral runners, comfortable, good-looking, last year the Flyknit was the new shoe on the block. And although I had a few issues with them, they cut my heels at first and the laces kept coming undone, I found them a nice comfortable shoe to run in overall. They didn’t last long though, marathon training wore the grip off the sole pretty damn fast and I moved swiftly on to Saucony Kinvaras. Hey, no one said I was faithful.

Earlier this month Nike released the follow up to the Flyknit, the Flyknit Lunar2 and on Monday I got to trial them on a run from Nike town – complete with a string quartet in a van on route, as you do. The run was only 5k so I can’t vouch for how they’ll last on distance but it was good to see some of the niggly issues from the first model have been resolved.

Last year’s attractive, but pretty useless, ribbon style laces have been replaced with normal laces that are a decent length (HATE short laces) meaning they didn’t come undone once on the run. A small but important detail – on training runs stopping to do your laces is a good excuse for a little rest, not so ideal in a race.

There’s more support in the shoe. Whereas the old version got a bit baggy round the ankle and had a very soft moveable tongue, the tongue is now integrated into the upper and the positioning of flywire cables and a tighter heel mean less movement and more support as your foot moves. Oh and no heel cutting either!

The sole has something called a ‘forefoot pressure map’, which is supposed to promote an efficient stride when running. Yeah, whatever. I’m always sceptical of claims like that but this does mean that the grip is now deeper so the shoes should cover more miles and last you longer.

After 5k, while I hadn’t even noticed I was wearing the left shoe, the right had started to pinch my foot a bit and I remembered I’d had this issue with my previous pair. The upper does tend to mould to your foot after a while but they are quite a narrow shoe (I wore mine without socks at first) so not great for the broader footed, might be worth trying the next size up.

Lunarlon cushioning means they’re a nice soft ride, there are reflective elements for running at night oh, and they look damn pretty too, with six colourways available in the women’s shoe and the option to customise them and create your own colourways over on Nike iD (£20 more). 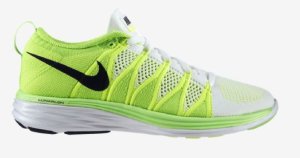 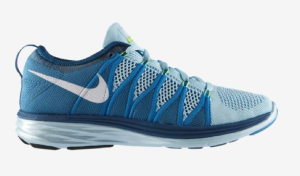 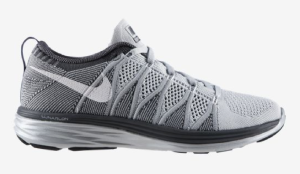 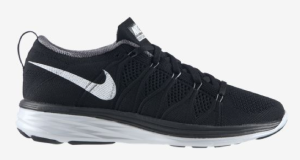 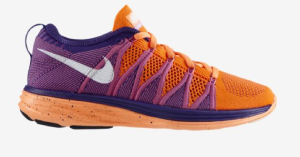 I could go on, but what’s right for me may not be right for you. Don’t be swayed by their good looks, go and try them on and see if they’re ‘the one’. At £135, they ain’t cheap, but what price the perfect runners eh?

For more info and to buy check out Nike.com

Wet hair, cold water, it’s easy to think of the negatives, but Duncan Goodhew MBE has made me fall in love with swimming again….