Ealing Half landed reader Kate a 1h 39 PB, a shiny medal and a weird laminated drawing of a pair of trainers but did it give her the #ealingfeeling? Here’s the lowdown.

What: Ealing Half Marathon

This race was a bit of a treat. After putting myself forward as a potential reviewer on Twitter and then bagging the opportunity, I thought excellent, I’ll write it in sonnet form or through the medium of well choreographed dance moves on snap chats. Turns out, there was too much to cover in a few lines and shakily filmed slut drops.

The race itself is still very much in it’s infancy. Infact, this was its second year running (bad pun). After catching all the #ealingfeeling appearing on twitter and crossing the river to land in Ealing on race morning, it was clear to see that despite being a youngster, it is incredibly popular; both with locals and runners from all over.

The park and course itself is large, it was well sectioned off, well sign-posted (excellent for my office computer strained eyeballs) and had the champion of amenities that all runners require: a place to get coffee and a large number of port-a-loos. I’m still going to have a moan about that though, as the queues for a pre-race Paula where ridiculously long. I had pre-race wee and then had to start the race and stop at 2 miles for a second Paula pit-stop, thus eating into my valuable chip time. No thank you very much.

The race was split into timed groups and you started in the group with the floating balloon emblazoned with your finish time fate on it. After nestling in next to my 1:50 neighours and loading up enough scouse club mega mixes (you can take the girl out Liverpool…) to get me round, we were off like a shot.

The course itself was pretty pleasant. Relatively flat, with the exception of a few cheeky unexpected hills. My arse cheeks weren’t so grateful for those vertical surprises, but when you’ve got a roast to go home to a medal to win, it’s a small price to pay. Few corners were a bit dodgy, some roads were congested with runners not willing to let faster whippets through (it’s dog eat dog out there) but when born free and galloping gaily through an open road (slowing only to pull half-melted skittles out of backside pocket for a quick buzz – rookie error) it was an absolute delight. Can’t help but feel like this was also helped by the easy, breezy weather.

I played a game of human cat and mouse in this race. After about an hour I watched the fastest man in the world run past -who had almost completed the run, and then went on to spend the duration of the race chasing a very determined lady who would fall back, then sprint forward, then fall back and give me the best chase of my life to the finish line. (Pictures illustrate pain).

The finish line itself was back in the park and swarming with the best kind of high pitched support. Largely disappointing was the lack of visibility of the race clock. I like a big ol’ yellow clock on top of the finish line, the sort that you can see from several hundreds of yards away and pull your fifth gear out to beat it. With this one, I felt like I was running blind and had to ask my better half and chief photographer what the hell I did it in, all the while conscious of the 6 minutes lost having a dump just under 2 miles in and spending the next 500 metres trying not to grizzle over it.

All in all, my 1h 39 landed me a new PB, a shiny medal and a weird laminated drawing of a pair of trainers. Ealing, thanks for having me, I’ll be back for your 3rd birthday, where hopefully we’ll both be potty trained. 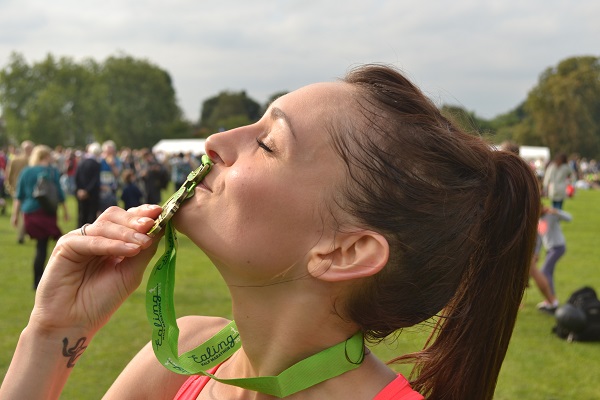 Did you race? Let us know how you got on and what you thought.

Say it with flowers? no ta, we’d rather have some of this fit kit instead