So yesterday was the Nike Women’s 10k. Around 4,000 women turned out and that night was bloomin’ OWNED! We were there, milking the post-race prosecco right to the bitter end. Here’s Charlotte’s verdict.

What: We Own The Night, Nike women’s 10k

Overall: Wicked night out, brilliant friendly atmosphere, good t-shirt and loads of free post-race bubbles. Great run to do with a group of mates but not ideal if you’re serious about getting a good time, if you’re not in the first wave it’s a pretty congested course. Fun though, definitely fun. 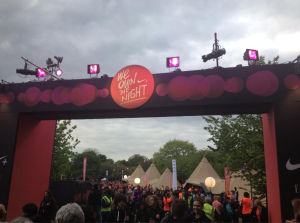 So last night was the Nike Women’s 10k, and around 4,000 women turned out and owned that frigging night! This was actually the first female-only race I’ve done and I have to say, what a pleasant change – no getting barged past on the course, much less offensive portaloos, no guys pissing at the side of the road, supportive non-competitive atmosphere… I’m almost tempted to say Girl Power here. Sod it, I will, GIRL POOOOOWWWWEEEEEEERRRRRRR! But that’s enough about just how F’ing brilliant birds are, on to the race.

The event village
Held in East London’s Victoria Park, the race started at 8pm but we turned up around 6 to soak up the atmosphere, check out the event village, oh and err, to interview Team GB 400m hurdler Perri Shakes-Drayton (our new favourite athlete, that girl was wicked! Interview up next week). 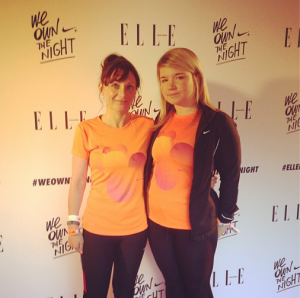 We don’t look like we’re looking forward to running here do we? Miserable gits

We’ve said it before and we’ll say it again, Nike give good event. The village looked pretty darn swish, decked out with loads of pink and orange lights and banners, huge screens showing tweets, instagram pix etc as they happened, a stage where Radio 1’s Gemma Cairney was spinning tunes and athletes Paula Radcliffe and Perri Shakes Drayton wandering around being really friendly to everyone. 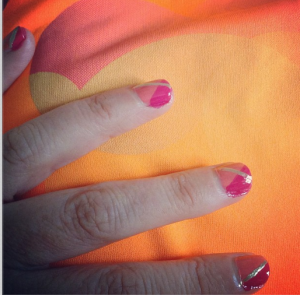 As well as a handful of food tents (tea and crumpets, meringues, vita coco water, dirty burgers) there was an Elle magazine tent, a Nike tent and a VIP tent. We spent quite a bit of time in that VIP tent darling, waiting for Perri and trying not to succumb to pre-run champagne, but we did check out the others too.

The Nike tent was mainly a showcase for running gear (mmmmm, running gear) and there were also some freebies being handed out – mini deodorant, face wipes, lip balm, dry shampoo – basically everything you needed to clean up and go straight out post-race. The Elle tent had free mags, nail painting (although you had to wait about 45 mins so sod that) and the whole of the field was scattered with huge orange and pink beanbags for chilling.

Most importantly of all, there were loads and loads of portaloos. And no queues! Dear race organisers the world over, it seems that this is actually possible. 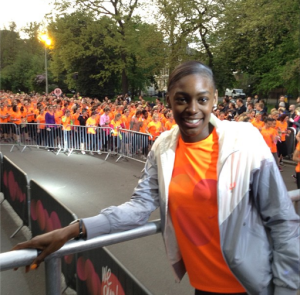 The race
Some of the Nike Training Club trainers held a pre-race warm-up, Paula Radcliffe gave an onstage chat and then it was time to head to the start. Unfortunately, this is where things went downhill for me. Although I must admit, this is mainly my own fault for starting in the wrong place. On entering the village, you were given a coloured wristband to designate your start wave. Unfortunately these weren’t done by time but pretty ambiguous statements, which I can’t actually find anywhere but were something along the lines of:

Pink – enjoying the run round

Orange – gunning for a PB

Blue – lead from the front (which one of the guys handing the bands out told us was for the pros. I’d say it should have been anyone sub 48/50 mins. His idea of pro and mine, pretty different).

When I signed up for the race I thought it would take me around 45 minutes. Then I got injured and didn’t run for weeks. As this was only my fourth (and longest) run in two months I was taking it easy. I’m not running fit and knew I’d struggle ( plus I foolishly did a boot camp in the morning) so thought I’d just enjoy the race and go for orange. Big mistake.

We found ourselves right at the back of the orange wave and the course was very, very congested with a number of sharp turns and narrow bits. It took me 3, very slow and frustrating ducking and diving, km to get past the 60-min pacer and most of this was spent running on the grass and round trees as the course was too packed. I didn’t get any space to run in a straight line till around 7k in and must have added nearly a km with my weaving off-road route. As I wasn’t bothered about time I resigned myself to this but if I’d been fit and trained I would have been pretty pissed off. Mind you, I would have gone in the blue pack then and life may well have been different. I spoke to Laura from LifeLauraLondon at the end and apparently everything was rosy in blue.

If Nike do this again, and I’m sure they will, a more staggered start by time would help immensely. 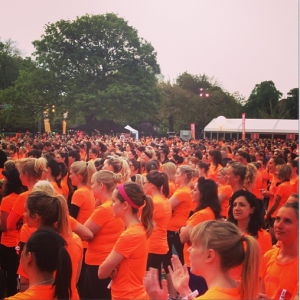 Anyway, enough about that. The course itself was flat, two laps, one 6k and one 4. Nice to have a shorter lap towards the end, very nice. You could also see a sea of orange (the colour of the race t-shirts) around the perimeter of the park and this pleased me greatly. The first lap was done in light but dusk was falling for the second and the large spherical lights used for km markers looked pretty darn cool. There were also huge screens flashing up ‘you go girl’ messages, such as ‘hot girls sweat’, ‘you’re earning bragging rights’ etc.  I would have liked a bit more whooping on route mind. There was such a brilliant atmosphere before and after the race but it seemed a bit flat during. I do like an `oggy oggy oggy’ and a bit of in-race whooping but most people were running with iPods. Boo to iPods. 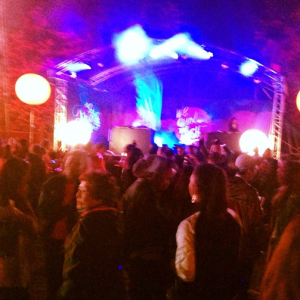 The after-party
The finish line took you straight into the race village where loads of staff (and there were loads, good work) were handing out various goodies. Water, cereal bars, glow sticks (YES!) and prosecco. Unlimited prosecco. All night. Yep, the after party was immense!

No medal though. Instead you were given a Nike bracelet, which I prefer but if it’s your first race it’s nice to have a medal isn’t it? Everyone needs a post-race medal-biting shot on their Facebook profile. 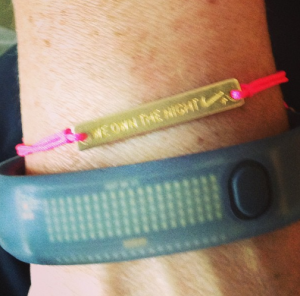 At the finish line I bumped into Paula, you know Paula Radcliffe, looking a bit sweaty. I asked her if she’d run and yep she had. Despite a foot injury she’d dived in. So to everyone that ran – you ran with Paula! Gemma Cairney ran too. And we saw Perri, she wasn’t running as she had a race the next day but her mum was. 1.33 apparently. Have I mentioned we LOVE Perri? 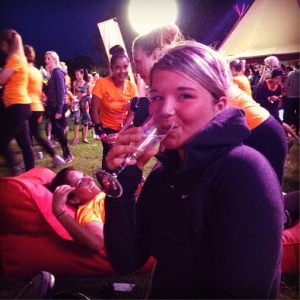 Em has some well-earned prosecco (lots of it)

Anyway, the party had some amazing tunes going down, everyone was on a post-race and prosecco high. There was some bloomin’ energetic dancing occurring and it was proper ace. Bumped into loads of people we know from Nike Training classes, fitness blogs, twitter love-ins etc. Lovely. And a thoroughly wonderful evening was had by all, which, when the event village shut at 10.30, we managed to carry on. Ending up at a random rave on the Thames beach in our Nike t-shirts. Whoops.

The verdict
All in all I loved the event and had a really great evening, I just wasn’t a fan of the congested course. Staggered start times are essential as I’m sure a lot of people who should have been in blue ended up in orange and orange in pink. To be honest though, I don’t care. This wasn’t so much about the run as it was about getting a load of girls together and doing something fun. And fun it certainly was, I have the fuzzy prosecco head to prove it.

Did you race? Let us know how you got on and what you thought. Oh and I can’t go without one final GIRL POWER dedicated to Abi Wright and Jen Slater for SMASHING their first ever 10ks! BOOMTASTIC!

Let’s leave it here should we

So recently we’ve kind of been getting into this yoga malarkey. And this is the class that started it all, hot bikram.