There was thunder, there were gales, torrential rain and flooding but there were also 86 miles to crack through. So we did. And we’ve got the aching joints, bum blisters and filthy washing to prove it. 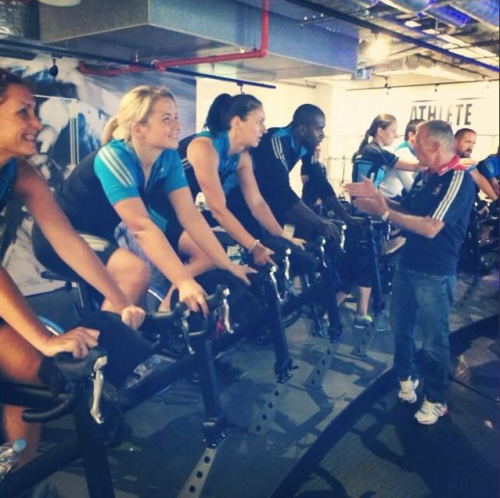 A couple of weeks ago I did the London Triathlon. A hip injury earlier in the year meant I couldn’t run and did very little that didn’t involve a beer garden for the next two months. Despite an average swim I was one of the first out of the water, but as person after person overtook me on the bike and my gammy leg got gammier, I found myself repeating the following mantra: ‘Respect the challenge. Respect the distance. Listen to your body. Don’t be a dick.’ I vowed never to take part in an event without training again.

So what the F*** was I doing on the start line of the Prudential RideLondon–Surrey 100 Challenge at some ungodly hour this Sunday then?

I present to you Ms Emma Lax. Despite saying I didn’t think I could do it and the furthest I’d ever ridden was 29 miles months ago, she persuaded me it’d be fine. ‘We can take it easy, it’ll be a lovely sunny day, it’ll be grand pal.’ Stupidly, I listened. Two days before the event I discovered that Ms Lax thought it was 100k not 100 miles. The fool. But it was too late to back down. We’d posted it all over social media, the most binding commitment known to modern man. 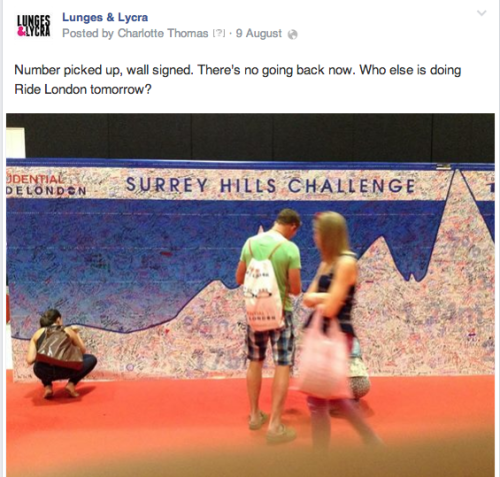 At 5pm the night before the event I went to Evans and bought my first ever pair of cleats. Everyone said don’t do it, not without trying them out for a few days first. But I knew the only way I was getting round this thing was with a pair of magic shoes. And they were magic. The first 16 miles or so were glorious, my shoes sent me flying through the closed roads of London town, whizzing down Blackwall tunnel and along the river into Richmond. Yes, I was supersonic, this was going to be so much fun.

What do they know?

The weather forecast had predicted torrential rain and gale force winds, the tail end of Hurricane Bertha, but I don’t pay much attention to the weather, not since that Michael Fish incident. It was drizzling but that was fine. Skin’s waterproof right? Then we hit Richmond Park and everything changed.

Emma and I had started in different zones and were planning to meet up at the first water stop. She phoned me while we were waiting to set off and confirmed a rumour I’d heard floating around, due to predicted weather conditions it was unsafe to tackle Box Hill and Leith Hill and the course was being cut to 86 miles. While those around me bemoaned the chance to tackle the two biggest hills after Everest (probably) Emma and I thanked our lucky stars. But unfortunately, it wasn’t just those two hills that were affected.

Once on the narrower, undulating roads of Richmond Park, the heavens dumped their watery load. Visibility was zilch and my contact lenses were being flushed from my eyes.

Once on the narrower, undulating roads of Richmond Park, the heavens dumped their watery load. Visibility was zilch and my contact lenses were being flushed from my eyes. As I approached one of the hills a marshall (brave, brave marshalls, well done guys) slowed us down to a stop. There was a huge tailback of riders and we had to stand and wait taking it in turns to walk our bikes up and down the hills. Progress was slow. Very slow. I was standing in the rain for upwards of 15 minutes and once you stop, everything seizes up, you get cold, you get miserable and all I could think was home and a bath were just six miles away.

I wanted to cheer the riders on their way to the finish, I really did, but instead what came out was ‘you bastards’.

But I wasn’t going to quit (mainly as I didn’t know where the exit was) and eventually made it out of the park and onto the roads of Richmond. But things weren’t much better here. There were further hold ups and more standing around as drains erupted flooding the roads. Faster riders who’d set off a couple of hours earlier were passing us on the other side of the road, making their way to the finish. I wanted to cheer them on, I really did, but instead what came out was ‘you bastards’. 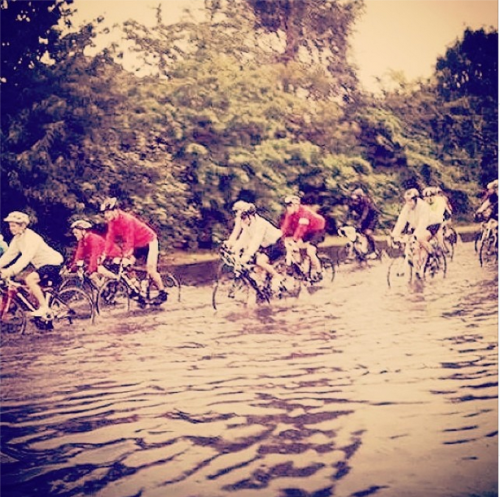 We went slowly under bridges with water that reached over the top of my shoes, riders squeezed single file through the only patches of road that weren’t flooded. I tried to feel hardcore but all I felt was wet.

As we headed into Surrey and away from urban areas the rain cleared to a drizzle. I hadn’t found Emma at the water stops on route but I didn’t get off on Newlands hill while loads of people were walking so I was starting to feel better about life. At the feed station at mile 48 I stopped to go to the loo and discovered my hips, lower back and knees had forgotten how to work. I’ve always had joint trouble and the standing around earlier and hunched position on the bike had basically turned me into my gran. But after a chat with other cyclists in the loo queue I was loosening up and then I found Laxy! I’ve never been so happy to see her smiling Scottish face in my life.

She too had been miserable but once we were together we got a new lease of life, we went up and down the Surrey Hills with ease, the sun came out and we laughed at our previous drenchings. Before we knew it we’d hit 63 miles then, what seemed like minutes later, we were at 74. ‘This can’t be right,’ we joked. Unfortunately, it wasn’t. The route may have changed but the mile markers hadn’t. We still had 26 miles to go. Arse.

But the weather was getting better and the few supporters who had braved the rain to huddle under gazebos and makeshift tents in the villages were a boost. One lady held a sign saying ‘sunshine this way’. I loved her. At the next water stop it was actually getting hot so we took off our jackets and bought a diet coke. Caffeine. Tremendous.

Then it was back on the saddle and into the sunshine for, oooh, seconds. As we cycled past a lake somewhere in Surrey thunder rumbled, the wind blew a gale and the sky pelted down icy rain so harsh it felt like needles. We were swearing and squealing like piglets but it was too cold to stop and put jackets on, it’d just be another layer of wet anyway. So we powered on. (I say powered…) 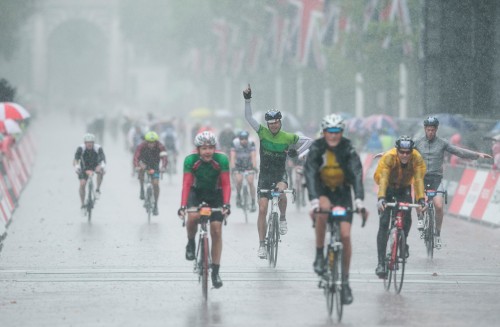 These people were faster than us

Eventually we hit the outskirts of London and a cruelly placed steep hill in Wimbledon followed by a downhill towards the river, heading through Fulham (maybe, somewhere posh anyway) and into central London towards the Mall. I saw the sign for 99 miles. I no longer cared. I just wanted to finish and while Emma still had it in her to sprint the final few metres up the Mall I simply could not be arsed. We got a medal. We stumbled off our bikes. We stripped down to our pants in the middle of Green Park, so desperate to get our wet clothes off we didn’t care who saw our bums. It had taken us a very slow, energy sapping seven hours. Then we had to worry about how to get home. No bikes on tubes or buses, Sunday so not many trains. I had to cycle three miles from Clapham Junction station. It was torture. I would have cried but I’d only just dried out. 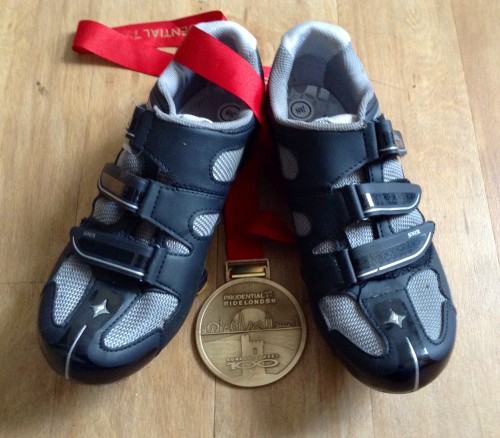 But once in the bath with the tunes on and a crap magazine, I reflected. In a strange way, that really was fun. On a sunny day, it would have been glorious. Would I do it again? I will definitely be entering that ballot when it opens on Monday. Would I do it again without training? Not on your freaking nelly. If there’s one thing I learned it’s that 100 miles is a very long way, oh and cleats are made of magic.

Respect the challenge, respect the distance, don’t be a knob. I will be completing my next event without training sometime in the very near future.

The ballot for 2015 opens on Monday 18 August prudentialridelondon.co.uk

She’s only gone and bloody done it. Our Hannah is now an Ironman! Here’s her race report, almost makes us want to take on the…