She’s only gone and bloody done it. Our Hannah is now an Ironman! Here’s her race report, almost makes us want to take on the 2.4 mile swim, 112 mile cycle and 26.2 mile run ourselves. (We said almost!)

Ironman history: The first of hopefully many 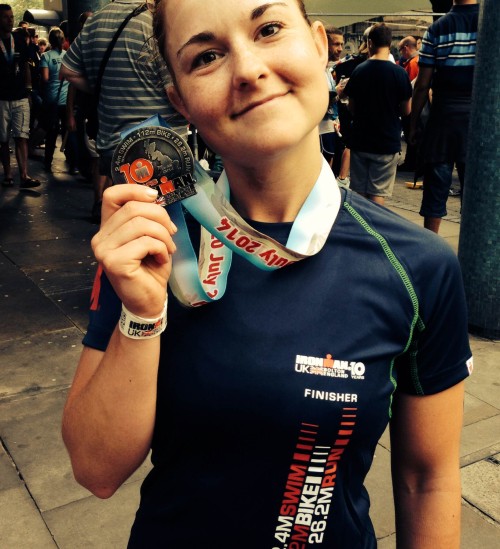 So it’s official… I AM AN IRONMAN!

The words ‘Hannah, you are an Ironman’ were said as I crossed the finish line in 12 hours 31 minutes and 8 seconds in Bolton last Saturday. They may have been cheesy,  but they were the words I had been waiting to hear, not just since 6am that morning, but since August last year when I temporarily lost rational thought and signed up for Ironman UK. I’m glad for that moment of pure insanity though, because Sunday was one of the best days of my life (cliché but since I’m not married and have no children, I can say that without offending anyone).

The day started at 2am, an ungodly hour to get up and think about having breakfast let alone a full day of racing but needs must. By 4am I was at the lake and in transition pumping up my tyres and doing last minute checks of the bike. Since my friend Fiona was also racing, and very conveniently the consecutive number to me, we were joking around in transition and just enjoying the atmosphere. We could have freaked each other out but actually having a familiar face was great as we kept each other relaxed and happy.

The next hour and a half was spent queuing for toilets and applying Vaseline to areas I never thought I would apply Vaseline to. Ironman is not an event for the glamorous.

Pre-race smiles, how long are they going to last then?

Before we knew it, it was 5.45am and we started to make our way over to the swim start. This was it, this was the start of a long day or racing and surprisingly I wasn’t nervous, I was looking forward to it.

I found a decent-sized space in the water for the swim, which I managed to maintain for most of it. I had the occasional knock here and there but nowhere near as bad as I’d expected. Swimming isn’t my strong point so I just relaxed, took my time and paddled on and was surprised to find out when I hit transition that I had finished the 2.4 mile swim in 1hour and 14minutes, much better than I had expected or wished for.

With what I thought would be the worst part over, I was then onto the bike. Undoubtably the part I had most been looking forward to. The first 10 miles was spent making my way through the seemingly never ending train of cyclists. The rules stipulate that you cannot be within 10 metres of the cyclist in front but with so many athletes getting out of the water at roughly the same time, for the first hour this is completely impractical as there are simply too many people.

I thought I had got away with it until I came to a sharp bend, hit the brakes and heard a clapping sound. With spectators and other cyclists around it was hard to tell if it was actually coming from my bike or not. A few descents and corners later and it was clear my bike was cheering me on in the most undesirable way possible. At this point my desire to finish in a certain time faded and I just wanted to finish, I hadn’t trained for all these months to bum out within the first hour of the cycle. Knowing that whatever I had done to my bike would not be fixable by me, I decided to push on at a more cautious pace and not use my front brake in the hope my bike would hold itself together for 100 more miles. Full credit to Trek bikes, they make a solid carbon fibre frame, having totally flipped over my bike before and it coming off with only a paint chip and then hitting a big pot hole at a considerable speed, it was definitely worth the insane amount of money I spent on it.

Downhill, with no brakes!!

I managed the 112 miles in 6 hours 22 minutes. Not quite as fast as I had hoped for or know I’m capable of but I finished it and that was the most important thing for me.

The bike course in Bolton is, however, tough and should not be underestimated even though 500m of climbing was knocked off the course this year with the rerouting of it. People say numbers don’t lie but a few IronmanUK veterans told the race organisers that the course was no easier this year than it had been previously. The climbs were steep and the descents were winding and technical (not what you want when you have only a back brake).

The crowds on the bike course were incredible, especially in one town where it seemed the entire village was on the upward sloping Main Street. It was like being in Le Tour De France where the spectators are within inches of you cheering you up the hill. I couldn’t help but smile and laugh at the surreal nature of the moment. Felt bloody fantastic.

Off the bike and on to the run. I had a 10 minute transition in order to change my shoes, take on some energy gels and nip to the toilet. My legs felt ok-ish for about the first 300m, at which point you hit the first sharp incline of the run course. On reflection I should have walked up it but trying to be the martyr that I am I ran it. By the top my legs were goosed and only 26 more miles to go!

Cobbles, that’s nice of them

I’m not going to lie, I was prepared for the marathon to hurt, I was not prepared for it to hurt as much as it did. Bloody painful are the only words that come to mind when thinking about every step. This is the point where mind over matter really kicks in. The only thing I could keep doing was putting one foot in front of the other and know that eventually I would make it over the finish line. After 4 hours and 41 minutes of plodding the finish line was finally there, it was in literally in front of me. The last 100m of the run was really the only bit I enjoyed but the enjoyment of those last 100m made the 26 miles of gritted teeth worth it and crossing the finish line and hearing those words was the most incredible thing ever. I think I would have cried, had my body had any spare water left in it to expel!

After crossing the finish line I turned to my boyfriend and said never again, 30 minutes later when I was changed and watching other athletes have their magic moment while waiting for my friend to finish I was already talking about my next one. Think I might have a new addiction, plus there’s always the drive to beat my previous time, especially my run time; I was pretty disappointed with my 4 hour 41 minute marathon.

Overall I finished 3rd in my age category, meaning I was presented with a trophy at the awards ceremony by none other than three-time Ironman World Champion Craig Alexander, and I was in the top 25% of all competitors, not bad for my first ever Ironman and second ever triathlon!