Six weeks till the marathon and Charlotte is talking double runs and err, having the runs, if you know what we mean.

What I learnt this week: Demolishing chocolate truffles 15 minutes before a tempo run will lead to stomach pains and a stitch. Must look at my nutrition.

If this week’s blog was sponsored by Sesame Street (man, that’d be awesome), it would be brought to you by the letter O, for Ouch, and the number two. Split into two halves, the first part of this post is about doing the double – two runs, one day – the second half is about, err, needing a number two mid run. I won’t be offended if you skip straight to the second part, everyone loves a bit of toilet talk after all.

This morning I ran 10 miles. It was windy and kind of raining. This evening I am running 10 more. Why on earth would I go out in this weather twice? Fricking injury innit.

The other week I was doing an 18 miler. After six miles my niggly hip was niggling. After 10 miles my wangy knee started wanging. Fourteen miles in I had to stop, tell my running buddies to carry on and shuffle/hop the last four home. Arse.

Off I went to see Gareth and GB at A2Z Elite Health and Performance (they treat Tom Daley you know). Can I just say these guys are amazing, and such a good laugh that I’m considering getting injured more often. Anyway, the diagnosis is tight hip flexors, particularly in my left leg, which is causing the hip pain and moving down to the knee when I’m tired. The prescription? Twenty thousand hip stretches a hundred times a day, exercises that work deep inside your hips and butt muscles, ow, and the dreaded double runs.

Rather than one long run on the weekend, I have to split the distance into two shorter ones in the same day. That way I’m still covering the same mileage but lessening the fatigue and hopefully stopping that hip, knee pain combo kicking in.

This has handily coincided with a feature in Runner’s World about doubling up on runs. They say:

I say, F**k me that second run is hard work. 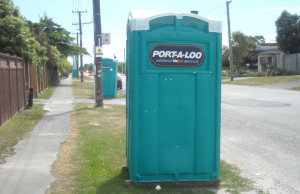 So far I’ve been alright, toilet-wise, on longer runs. Then last weekend I went to my mum’s. Friday night went out for a curry… you know where this is heading right? Yep, straight into a bush being stared at by an angry swan.

Friday night I went out for a curry… you know where this is heading right? Yep, straight into a bush being stared at by an angry swan.

Last year I was fine on all my long training runs, then where did those butt-clenching cold sweats hit? Half way round Brighton marathon that’s where. Luckily I found a lone miracle toilet with no queue, but watching your Garmin tick away as you’re struggling to get your Skins down is no fun. I can’t take Immodium like many runners as tablet coatings irritate my stomach lining, therefore I need your advice. How do you stop the trots? Short of a cork, I’ll try anything.

Training statistics: Miles/km per week, 35miles – to be continued

5 miles tempo at SRC. 7.36 min miles. Would have felt good if I hadn’t scoffed that chocolate.

You can tell it’s summer, because every other fitness class this month is taking place on a rooftop, not that we’re complaining. Here are June’s…