Just five weeks to go, five weeks! How did that happen? Charlotte is getting nervous but, in other news, wine may help you run faster!

What I learnt this week: Marathon training kicks insomnia’s ass. I usually struggle to sleep now I can’t stay awake. Even considered a nana nap on the sofa the other day.

Five weeks to go, five random thoughts under different headings. If you can’t be arsed to read it all skip straight to number five, you’ll like it.

This came. Aaaaaaaaahhhhhhhhhh! Officially shitting it. 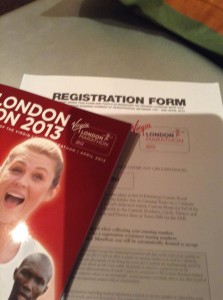 For the last couple of weeks I’ve been splitting my long runs to try and stop my bad hip and knee setting in. 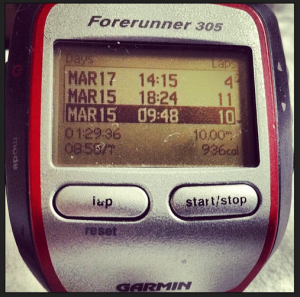 I’m a huge fan. The first time I did it the second run was really, really hard. The next time it was great and the second run was much easier. It also means you don’t need to take a huge chunk out of your day to fit in your run and can do some before work, some after, therefore freeing up your Sunday mornings for the Hollyoaks omnibus. This week though, I have to try and do one long continuous run, 21 freaking miles. Poor, poor hip. Here’s hoping it stands up, otherwise I’m screwed.

I have discovered I’m not always right. This has fucked me off. Particularly because the people who were right are the kind of people who like to always be right. They’re guys, obviously.

When I was wrong a. My mate Derek is always telling me I need to eat breakfast before long morning runs as I’m just making the run harder. I reckoned a couple of extra hours in bed and no stitch counteracted any breakfast benefits. Last Friday I split my long run (physio’s orders), 10 miles in the morning with no breakfast or, err, any water before heading out, 10 miles in the evening. The morning run was a right old struggle. I was dreading the evening but actually after a day of eating and drinking it was loads easier, felt great and I was running 20 secs a mile faster without trying. Damn.

When I was wrong b. When I went to see my mate Sam the other week he asked how training was going. I said ‘not great’, he said ‘you need to stop fannying about doing all these other exercise classes and run more then’. I like doing other stuff it breaks up the boredom but this week, the day after my split 20-miler, I did a two-hour Block Workout training session. This meant the seven-mile run I had planned for Sunday didn’t happen as my legs were officially battered. Maybe I do need to cut down on the other stuff for the next few weeks if it’s going to interfere with my running. Pants.

I need to get mentally tougher. 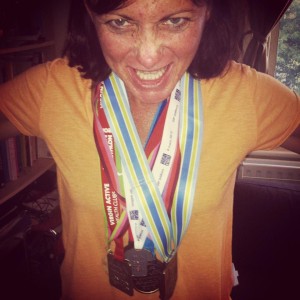 Medals not all model’s own

This time last year I felt really prepared for the marathon. Training had gone well, I knew I could do it. This year, all the bad long runs and injury have knocked my confidence and I don’t think I can make it. What I’ve realised, however, is that I need to ignore everyone else and run my own race. There’s a group of us who have done a few of our long runs together, Jen, Adel and moi are all training for the VLM and were hoping for similar times. Adel’s training has gone really well, she’s had no injuries, is acing the long runs and looking strong. Me and Jen have been dropping to bits. But I need to stop feeling bad that my training hasn’t gone as well and I haven’t run the same distances and just concentrate on my own running rather than spending all my energy hating on Adel. (Jokes Adel, jokes). Basically I need to toughen the fuck up. Grrrr etc. 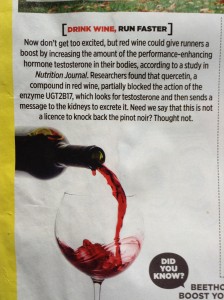 3 miles slow. Was supposed to be 7 but legs broken after BWO

5 mile tempo run at Sweatshop Running Community – 7.27 min miles (felt pretty easy but I hate the route we did so much I wanted to stop and have a tantrum on the way back. Cheers jen for making me finish. Mental training I suppose.)