Name: Charlotte Thomas
Age: 35
Marathon History: Brighton Marathon 2012, 3.46
Goal: sub 3.45
What I learnt this week: Patience is a virtue. Unfortunately, I have discovered, it is a virtue I do not possess. 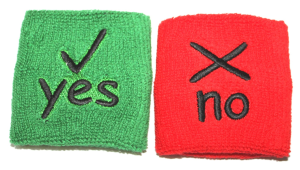 If you’re a regular reader of the blog, you may perhaps be aware that I am injured. Because this is ALL I talk about. ALL THE TIME. ‘My leg this, my leg that’ aaaahhhhh. I am driving myself, and everyone I know, insane. And my leg is driving me insane because it still doesn’t work properly and it’s making me mope around the house eating chocolate, the little fucker.

It’s still not exactly marathon-ready, I managed 15mins walking, 15mins very slow jog on the treadmill last night and today it hurts. So, unfortunately, with around 10 days to go, it’s pretty much decision time. Do I run, or do I save injuring my legs further and try and get a place in a later marathon?

>>The atmosphere – I love this city and I want to be part of one of its big occasions. I want to pretend I’m in the Olympics as the crowds cheer me on. I want to look up at Big Ben and all the other landmarks and say ‘you’re beautiful London’ and I want to get totally hammered with my mates at the end. It’s London, it’s one of the biggies, it’s a great day out and I want that fricking metal.

>>My mates are doing it – and yes if they jumped off a cliff I would too. I’ve done most of my training with a couple of girls from running club and have met so many people on Twitter who are running too and of course there’s lovely Lorna… I’ll be so jealous of them if they run and I don’t. Proud and happy for them to their face obviously but bitter and twisted inside (jokes kids, jokes).

>>The sacrifice – have I given up nights out,  lie ins and  run 21 agonising miles in the snow for nothing? I think not.

The tape got jazzier. The face didn’t

>>The physio and doctor said it wouldn’t be wise. The doc at at A2Z Elite Health and Performance said if it was the only marathon I was going to do they’d tape me up, drug me up and do everything they could to get me round. But, this would likely cause more damage and affect me running for a while afterwards. As a regular runner the wise thing would be to avoid all impact for a further week, carry on with my physio exercises, not run London and find a later marathon. But, of course, the ultimate decision is mine.

>>It will hurt – I can deal with that. It will be slow – I can’t deal with that. Time shouldn’t matter, but what can I say, it kind of does. This isn’t my first marathon, and hopefully it won’t be my last, so I’m not doing this just to get round. If I could guarantee a few painful miles at the end and only an extra 15 minutes on my time, I’d definitely do it. But 26 painful miles for an added hour or so, not so good. I don’t have a charity place so there are no fundraising obligations. Hmm.

>>My mum said don’t do it – as she rightly pointed out by marathon day I won’t have done a proper run for a month and 26.2 is a long way to go for your first run back. She’s done London a few times she talks from experience. But then she thought I’d never do the triathlon when I turned up with a monster hangover after drinking till 4 in the morning. But adrenaline and a dip in the Thames are wonderful things.

I am torn. My heart says yes, my head says no. I am off to see my running sage Sam for some honest advice. Then I might get pissed. That’s the sensible way to deal with these things right?

Ps, in the meantime, if anyone knows of a spare place going in Edinburgh marathon I am definitely interested.