What training has taught me so far: If you don’t train, you ain’t going to be as good as you were last year.

What I learnt this week: The frog is a magic stretch.

As anyone who’s training for the 2013 Virgin London Marathon (VLM) knows, there aren’t actually 11 weeks to go, there are 10.5. Yep, it’s officially crap the compression tights time.

And I’m really starting to regret being quite such a shirker when it comes to marathon training. Because if there’s one thing you can’t blag, it’s a marathon.

I ran my first 26.2er, Brighton, last year and I bloody loved it! Even the last long and torturous two miles were amazing. The reason it was so enjoyable was A. because I had a lot of friends running and supporting and B. because I got my head (or more aptly my feet) down and properly trained. I’d done a few halves before but you can kind of get away with skimping on training there. The marathon, well it’s a long way, blagging that would bloody hurt. 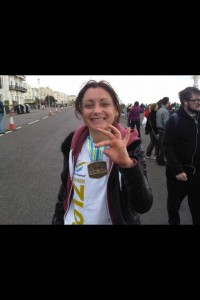 For 2013 I was jammy enough to get a Good For Age place in the VLM – which makes me nowhere near as fast, or as old, as it sounds. (Women aged 18-49 who ran a sub 3.50 marathon in the past year.) When I got the letter of acceptance I was still feeling pretty euphoric after my Brighton experience and formed some major plans – keep a good base level of training going all summer, go hard for the last 16 weeks, add in some speed work, smash 3:40…

What actually happened was, I went to the pub. For around six months.

After Christmas, I figured I’d skived long enough, started going back to running club, realised I had lost nearly all of my fitness, launched into a crash training regime and revised my goal time to 3:45, which to be honest is still a bit optimistic. I also rediscovered the joy of the long run.

One of the things that got me through training last year was long Sunday runs and big fat brunches with other marathoners from running club. It’s a lot harder to bail if you know your mates are waiting for you with loads of Saturday night gossip to discuss en route. (Or more likely blisters and energy gels, marathon training seriously compromises your chat.)

Sunday morning came and instead of the expected clear head, I woke up with a skanky chesty cough, hacked up an eyeball, realised I couldn’t run and had to go back to bed. Bollocks.

We reinstated the long runs last month and the fourth run in, this Sunday’s route, was planned for 13.5 miles. After last week’s 12 miler I discovered my limit with a hangover is 10 so spent a dry Saturday night on the sofa, smugly watching Take me Out. Sunday morning came and instead of the expected clear head, I woke up with a skanky chesty cough, hacked up an eyeball, realised I couldn’t run and had to go back to bed. Bollocks.

What this little episode taught me – aside from the fact that Take me Out is great but Take me Out the Gossip is even better – is that you can’t jump straight back into training and continue to go out on the lash three nights a week without something giving. And so, it was with weary heart that I had to make a very tough decision.

In order to ensure I complete my training runs and have some chance of getting round this bloody thing – it has become necessary to restrict my drinking. TO ONE DAY A WEEK! This may not sound like much of a sacrifice to many, but for those who know me, this is major. Alas, drastic times call for drastic measures my friends, drastic measures. 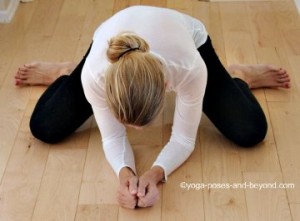 This week I had a niggly hip. I went to yoga and was introduced to the frog stretch. Great for runners as it gets right into your hips and glutes. Feels amazing in a slightly uncomfortable way.

Running track of the week: None, my ears went au naturel.

We’ve been so manic recently we’re only just getting round to putting up November’s Trainer of the Month. It’s worth the wait though. Um,…