Some mothers and daughters bond over afternoon tea and a manicure. Me and Jude prefer to swim in the Thames.

Short legs, freckles and an appreciation of shit jokes, you inherit a lot of crap from your parents. But you get some good stuff too. And one of the things I got was a healthy attitude to exercise and fitness.

When mum went to keep fit classes in the village hall during the 80s – wearing spandex tights, a bleached blonde ponytail and electric blue mascara – I thought she was waaaay cool (although at the time I also wanted to be called Stacey). She ran – doing marathons and half marathons – when me and my brother went to swimming after school she joined the Masters sessions and, as my dad was obsessed with cycling and buying bikes, he also persuaded her to join him and do a couple of triathlons. Although she’ll readily tell you she never liked them.

She’s 65 now and, until last weekend, hadn’t completed a triathlon since circa 1992. But when you’re Supermum, what’s 21 years? 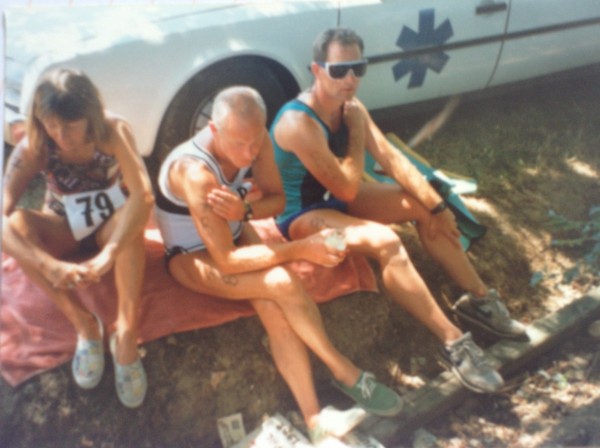 Back in the day

I’ve done the sprint distance London Triathlon since 2010 and every year my mum has been to watch. The first year I did it she said it was fun to spectate but she’d never do one again. Ever. The second year she laughed when I suggested it. Last year, after seeing me complete it with a raging hangover (I’d just been made redundant) she figured it couldn’t be that hard after all. A bit more gentle persuasion and a Triathlon Training book for Christmas and she was in! Yes, I was getting my OAP mother to swim in the Thames!

Mum came down the day before race day so she could practice riding my road bike – she has a hybrid which isn’t ideal so shared mine – and try on my spare wetsuit (the funniest thing I have seen in a long time, she kept getting stuck and then practiced swimming on the arm of the sofa). And then, suddenly, it was race day.

Jude’s race, the super sprint (400m swim, 10k bike, 2.5k run) was in the morning, mine in the afternoon. And I will tell you now I was way more nervous for her than me. She’s no spring chicken after all, what would happen if she panicked in the Thames or came off the bike? 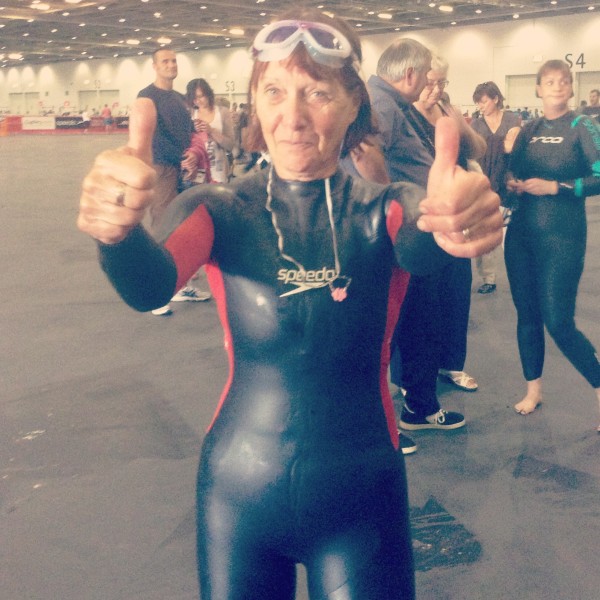 Ready and raring to go

But need I have worried, need I heck. She may not have been looking forward to it but she completed her 400m swim in the Thames in a pretty damn respectable 12 minutes – nose clip and earplugs in.

She enjoyed the 10k bike taking in the sights as she went round and has vowed that next time she’ll go faster she kind of forgot it was a race. (Yep, did you clock that? Next time!). Her run time she wasn’t over the moon with but when your legs feel like lead after the bike leg and it’s 30 odd degrees out completing a run in any time ain’t bad mum. 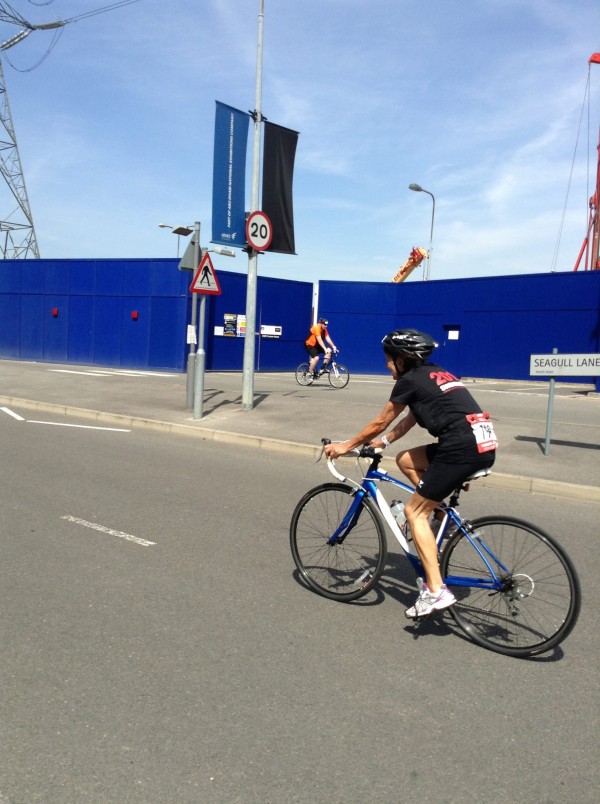 And when she was sprinting for the finish line i was screaming away. Watching someone you know complete a race is sometimes even better than doing it yourself. Actually way better, you don’t need to get too sweaty for a start. And checking the results just now, she came first in the 65-69 age category! FIRST!!!!!!! You fucking star Judy!

While mum was tucking into her post race jacket spud with cheese and beans and rocking her medal, my race time was approaching and the nerves were starting to kick in. I’ve had a bit of a panic attack in the swim the last couple of years so really wasn’t looking forward to it but the cheery Welshman who gets you prepared at the start soon put the nerves to rest. Then, something bad happened.

I swam as a kid so i’m ok in the water and this year i’ve been going to a swimming squad so was feeling confident of completing the 750m in under 15 minutes – to be honest it’s the only bit I’d actually trained for. Yes, I only did one swim a week but it was a bloody tough one. In my wave there were 400 girls and so the organisers decided to split us. Not a problem. Only thing was, they didn’t ask for times. Basically the last 100 of us – all pretty confident swimmers – were set off two minutes after the others. TWO MINUTES! This meant that around 30 seconds later we caught up with the back of the group and were confronted by a wall of breaststrokers. Pretty impossible to get past and also not fair for the girls at the back who probably weren’t overly confident in the water and suddenly had a surge of faster swimmers approaching. I spent most of the swim trying to get past people, having to do breaststroke, sticking my head up and swearing. A lot. Any hopes of a decent time, scuppered. Getting past hundreds of people in the Thames ain’t easy.  I came out of the swim in 17 minutes and absolutely fuming – to put this into context, last year i did it in 16 with a panic attack, a raging hangover and only five swimming sessions in the whole year. 17 not good. 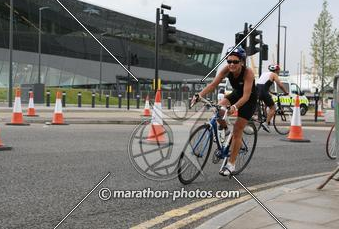 My mood was, shall we say, sour. I soon cheered up on the 20k bike leg though, despite the fact it had started raining and the wet course, which seemed to have caused a few nasty crashes on the tight bends, and the fact that i’m not particularly good on the bike (it took me 46 minutes) it’s my favourite bit . The sprint course has a few inclines and i even found myself thinking maybe I should have done the Olympic distance, the route is much more interesting and pretty flat. This was a foolish thought as the run, well it just about killed me.

Five km, should be easy no? NO. I really must do some brick training next year. Since my torn calf in marathon training i haven’t really run, probably once every couple of weeks. Unsurprisingly then, i’m not as fast as i used to be. A fact i seem to forget until i try and run. Sheesh it was tough goingl. Luckily i started chatting to a lovely girl called Katrina who had been following me in the cycle. We took it in turns to pace each other, encourage each other and ran over the line together in 25 mins (not my best 5k by a very, very long chalk but done). 14th in the 35-39 category, outdone by the mother! 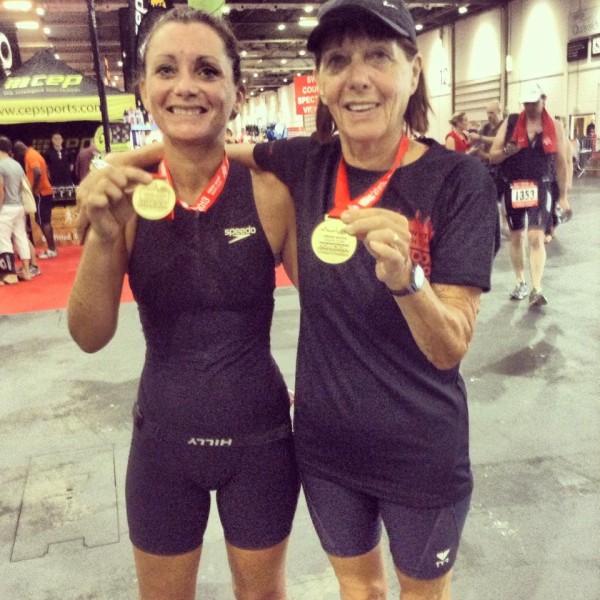 Once completed I bonded with my mum in the more usual way, a large glass of rose. Then we came home decided we couldn’t be arsed to go out for dinner and went to bed knackered at around 9pm. Mum’s back in the super sprint next year, she’s hooked. Me? I’m going for the Olympic. I know i can do the sprint without training so like a cocky bastard I never really bother. This is bad. The Olympic distance will bring just the right amount of fear of drowning for me to train and maybe even do a better time. I might even join a tri club and check out the hot men. You know what you’re getting for Christmas now Jude, a London tri entry so there’s no backing out!

Whether you’re building up to your first mile or training for a marathon, running can be hard work – but we love it. We…