After knocking 45 minutes off her marathon PB last month, our friend Charlie Watson from therunnerbeans.co.uk reveals how she got so much chuffing faster in just one year.

♦ Weight
Through various methods, and rather unintentionally, I lost nearly a stone between my two marathons. Simply having less muffin top to carry around the course certainly helped me run faster.

♦ Strength and Cross Training
Fitting your training runs into your weekly schedule can be tough, whether you’re running 3, 4, 5 or 6 times a week. But it’s equally important to make time for strength training and cross-training. I was trying out at least one new class a week during marathon training, including Barrecore, Aquaspinning, and Crossfit. These helped build the muscles in my legs, arms and importantly, my core. I know my strengthened core helped me finish the NYCM feeling strong. Cross-training also helped me workout without burning out, keeping training fresh and interesting with constant challenges.

♦ Coaching
For my first marathon I followed Hal Higdon’s Supreme novice plan (I couldn’t run round the block when I first started training), and I will always recommend Hal Higdon’s plans for beginner runners and those that don’t want to fork out for a specialised plan. For NYCM, I knew I wanted to up my game, and since I was going to be documenting each training run, I thought I better speak to someone who knew more about marathon training, and the New York marathon than I did. A friend recommended New York based trainer Gia (rungiarun.com), who gave me weekly updated workouts, helped with my fueling strategy, went through the course with me and even let me join her run club when I was in NYC.  I loved working with Gia, and having paces set for me, my training plan adapted to how I was feeling and performing and races worked into the schedule. For me it was a worthwhile expense, however Runner’s World make some great time-based training plans, and there are plenty of amazing running coaches here in the UK. 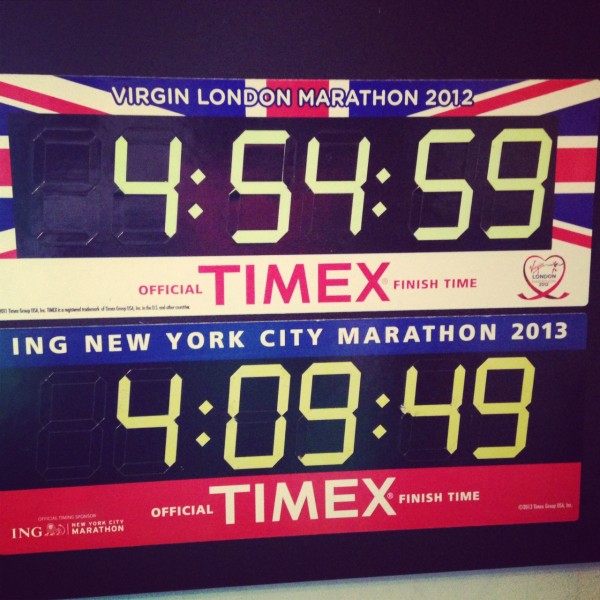 ♦ Speedwork
It sounds obvious, but to run faster you have to train faster as your body needs to get used to running at an increased pace. Hal Higdon’s supreme novice plan doesn’t include any speedwork, but Gia’s (rungiarun.com) had it on the schedule every week. This varied from mile repeats to 400m and 800m repeats which I completed on the treadmill. Pushing myself to run faster helped build my confidence and mental strength as well as my running efficiency – when I slowed back down to marathon pace it felt almost easy!

♦ Fueling
When I first started running, I had no real clue about fueling, picking at haribo and occasionally drinking Lucozade during long runs. For the NYCM, I came up with a fueling plan that I practised during my training runs and implemented on race day. I ate a Gu gel at the 5, 10, 15, 19 and 23 mile markers. It’s important to work out what race day nutrition works for you, keeping in mind to evenly space out your fuel as your body gets used to being fed every 30mins/3miles/5miles or whatever you choose. Remember to think about your hydration too, are you going to run with water or will you rely on water stations? Your hydration decisions will affect your nutrition choices so make sure you think about it in advance. You can read more about my marathon fuelling here (therunnerbeans.co.uk).

♦ Watch
Both my full and half marathon PBs have come when my watch was slightly out of whack, or completely broken. I know that if I’d accurately known how fast I was running I would have pulled back during both of these races and not achieved my full potential. Running on feel can be scary, but ultimately it stops you obsessing over pace and allows you to concentrate on your legs, breathing, pumping your arms and enjoying your surroundings.

♦ No Excuses
I didn’t miss any training runs during my marathon cycle, yes I adapted some, moved them around and changed them, but I managed to fit them all in during the week, even while working six days a week. If you want to run a marathon with all you have then you have to give everything you’ve got to your training.

The more you sweat in training, the less you bleed in war’. 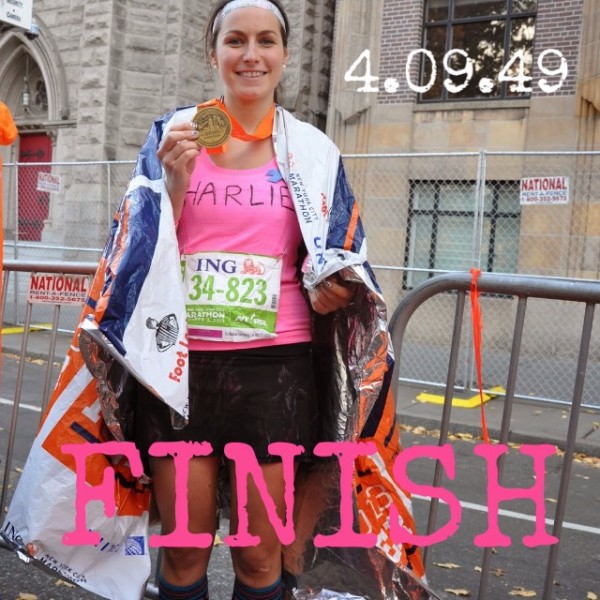 Charlie is a fitness blogger at therunnerbeans.co.uk you can read her full marathon race report here.

So we’ve had some sunny weather recently. Hurrah! While for most people that’s the cue to book in for a pedicure and whack out…