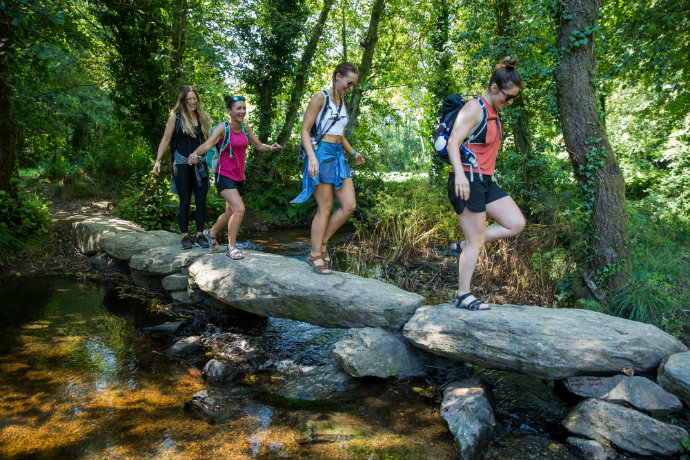 Hiking along an ancient pilgrim’s trail for 115km through the Spanish countryside was one of the most fun holidays I’ve been on, closely followed by a school trip (yes, really).

One of the best holidays I’ve ever been on (aside from Faliraki at 16 but that’s a whole different story) was a school trip to the Lake District. So far, so boring and unrelated. But it wasn’t. We camped in a field for four days, tried loads of different activities with some army guys – from gorge walking to assault courses, abseiling and kayaking – went to bed shattered and full of fresh air.

One of my favourite things about that trip was the people. Amazingly, and despite plenty of classroom evidence to the contrary, we all got on. The activities meant you got talking to people you didn’t know at school, there were in jokes and bonding. Even the teachers were alright. In short, there was a lot of crew love. Of course that all changed on the bus back home, but it was awesome while it lasted. 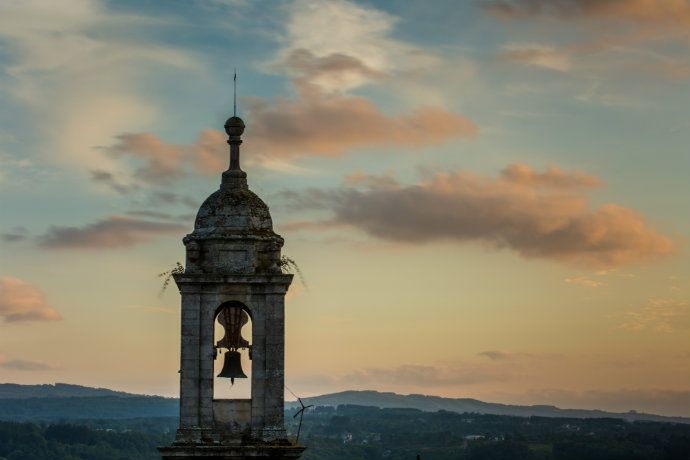 View from the city walls in Lugo, pic, Greg Snell

Hiking the Camino de Santiago – 115km of a trail in Northern Spain – with G Adventures reminded me of the school trip. And that’s a big compliment. Like in the Lakes, there was an awesome squad of people, many of who I didn’t really know before, lots of walking, lots of fresh air, and the kind of belly laughs and silent crying that got me thrown out of GCSE French. Unlike the school trip, however, there were less rules, no curfew, and delicious food and Galician wine instead of burgers and kiwi 20/20. Oh and we still all get on!

But what you really want to know is what we did and if you can do it too right? In honour of the school trip similie, I’m going to let you know all the deets in a Q&A exam-style format, because a ‘what I did on my holidays’ essay is no fun for anyone. Here goes:

What is the Camino de Santiago? 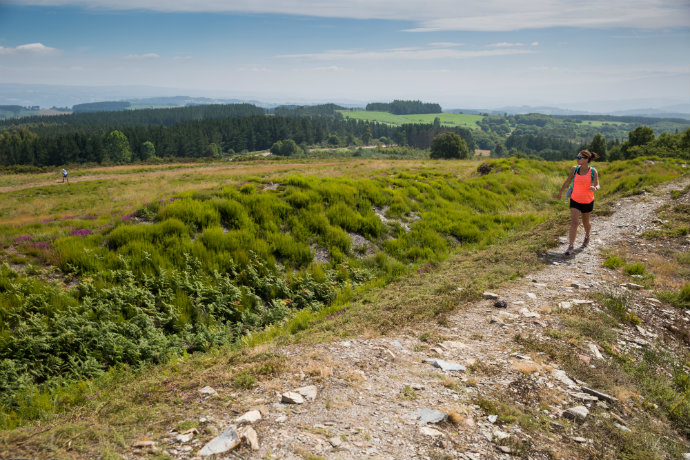 Like me, you may never have heard of the Camino, but it’s actually a pretty big deal – nearly 300,000 people hiked it in 2016 – from school groups to people in their 80s. It’s an old pilgrim’s path from the Middle Ages, leading to a cathedral in the town of Santiago, Galicia, northern Spain. While it used to be a pilgrimage to see the bones of St James who’s buried there, now around 60% of people walk for fun, fitness, ‘to find themselves’ or for the challenge.

How far is the Camino de Santiago? 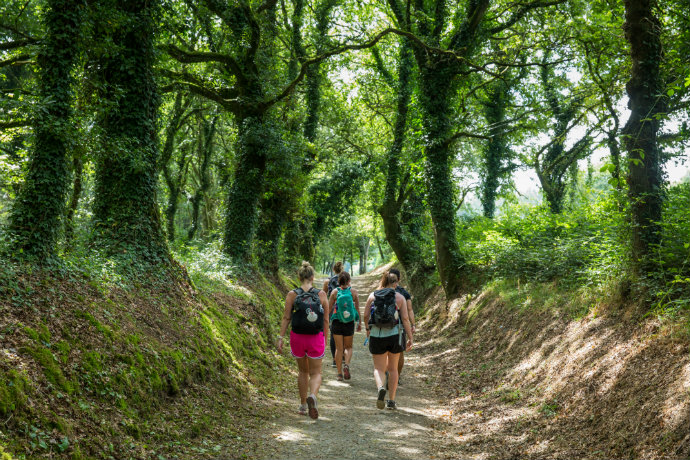 Parts of the trail felt like being in Robin Hood, pic, Greg Snell

There are four different routes to choose from with people walking from Portugal, France, over the Pyrenees or even from their own front door. To get your certificate of completion at the end – oh yes, there’s a certificate – you have to cover a minimum of 100km by foot or 200km if you’re doing it by bike (cycling didn’t seem as popular). There’s a sailing route too, if you’ve got a spare boat knocking about.

We took the most popular route covering just over 115km but some people will walk for weeks or months, often covering 800km and doing it solo. Nuts.

Who did you hike with? 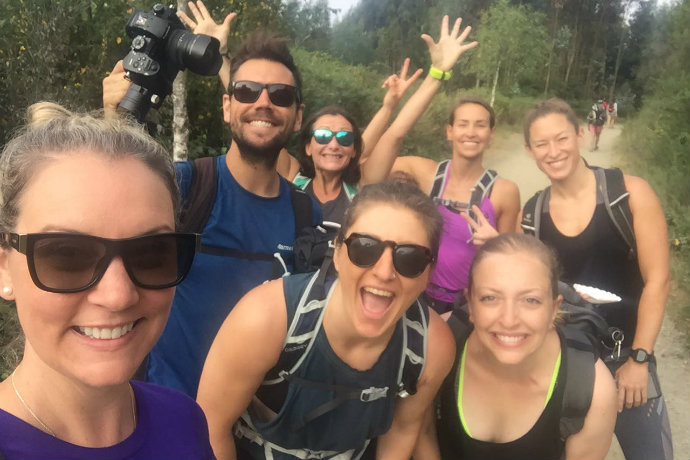 I went on a trip with G Adventures, a small-group adventure travel company who do literally hundred of trips across the globe (I’ve got my eye on the Inca trail and Everest base camp next).

There were eight of us in our crew, moi and three other fitness bloggers Cat Meffan an insane yogi, northern bird Hayley of Break the Loop who I knew pretty well already (she’s in the Wonder Woman film you know), and Manc Crossfitter Sarah from Squatbot. The rest of the gang were made up of Greg a ridiculously silly Canadian photographer, Casey and Sacha from G Adventures and our local guide Lalo. Bless Lalo, I wouldn’t have wanted to be in charge of us but he was a smasher, plus he knew all the best local places to eat and hidden ruins we never would have found on our own. He also pointed out where to find Zara when we hit the city (it’s cheaper in Spain).

How long was the trip? 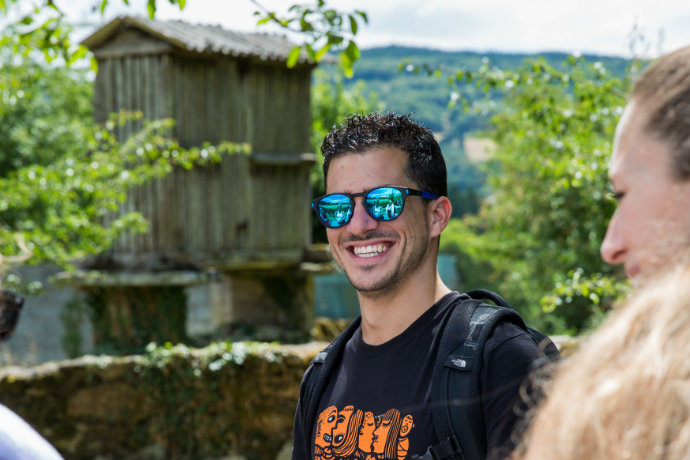 We were there for seven nights in total. The first day was spent meeting everyone, wandering around the medieval city of Lugo and eating our bodyweight in Padron peppers. For the next six days we were walking through the countryside.

What was the terrain like on the Camino de Santiago? 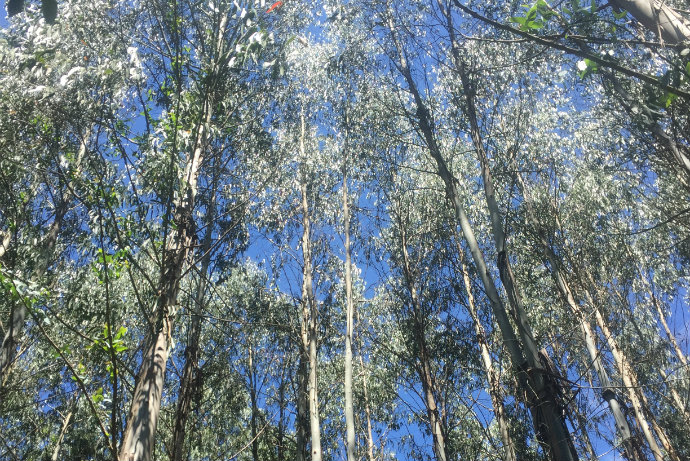 You’d think you were in Oz with all this eucalyptus

Not what I expected! You think of Spain as being quite arid but the climate in Galicia is similar to the UK (although a bit warmer) so it’s extraordinarily green. On our journey we walked past towering fields of corn, through ancient forests, past farmland and livestock, through stone-built villages with tiny streets, walls of eucalyptus trees and a few travelling bands.

The path was marked by signs so it was hard (although as we proved certainly not impossible) to go the wrong way. Sometimes the trail was stony, sometimes it was grassy or stepping stones over streams, and sometimes it was gravel path and, nearer the city, tarmac. Although it was undulating in places it wasn’t too steep, it was like a pleasant walk in the country most days – albeit a bloody long one.

Could I run it? 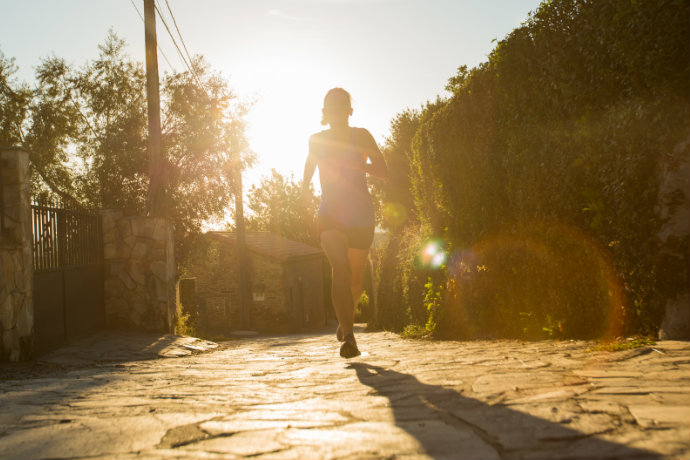 Little pootle round one of the villages at sunset. Beaut

Yep, easily. In fact, I know a couple who are running the route from Porto for their honeymoon – the Maldives must have been fully booked.

What was a typical day hiking the Camino de Santiago like? 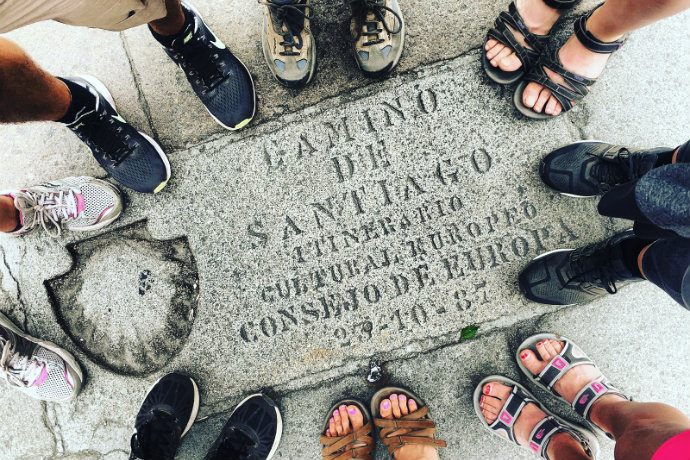 We started in the town of Sarria and our first stop was to get a Camino passport – a little book that you fill up with rubber stamps you can get at cafes, hotels and churches along the way. You need to have a minimum of two stamps a day to prove you did it. Cheaters don’t get no certificate!

From then on it was walking. Typically we’d start around nine in the morning and walk and chat, maybe stopping for coffee, always stopping for a long lunch, before finishing at a different hotel further along the trail each night. Once we got to the hotel, we’d usually take our shoes off – blissful – and seek out a local lido for a sunbathe and a swim. Tough life.

Is it physically gruelling? 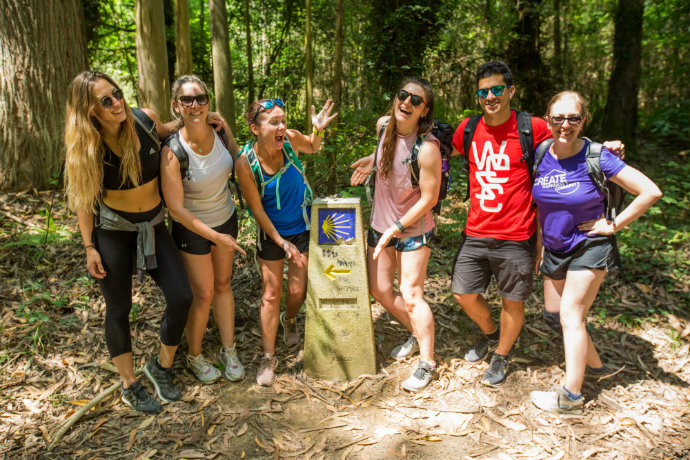 It’s definitely achievable for anyone with a base level of physical fitness. Our first two days were around 25km each, which I could run in just over two hours, but walking is a completely different kettle of fish. You’re out there for most of the day so you do get some strange aches and pains – shins and glutes for me. On the second day there were DOMS but you flush it out once you start walking. The third and fourth days were shorter, so you have chance to recover before finishing with some longer days again.

What did you eat? 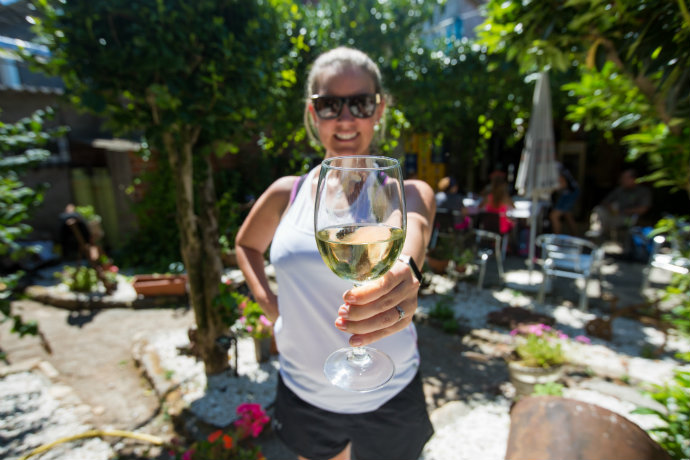 Galicia is known for it’s white wine, Casey (above) and I agree, it’s grand. you can take the girl out of New Zealand eh Casey?

I thought you’d never ask! Mainly traditional Spanish food, pan con tomate, far too many Padron peppers, local meats and cheeses, polpo (octopus) was a speciality of the area, huge gooey tortillas, amazing nectarines loads and loads of fresh bread. I’m vegan and Cat’s vegetarian – not as common in Spain – but our guide helped us out. I would say though, if you are veggie, take a few snacks and some nuts just incase, and make sure if you order a mixed salad you ask for it ‘sin atún’.

What was the best bit? 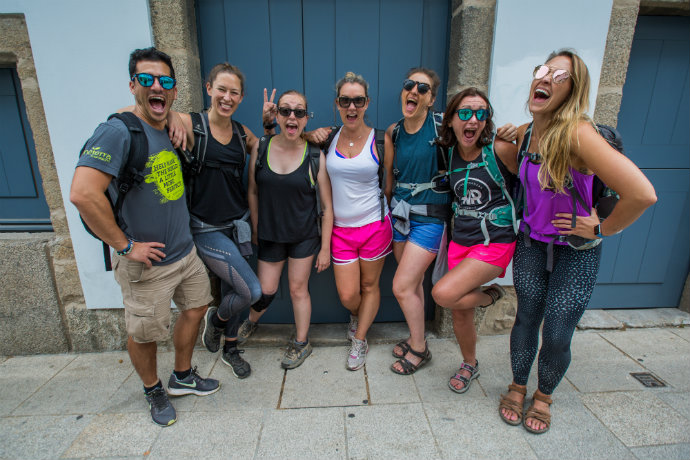 The people! You naturally fall into a walking rhythm with one or two others and get to chat to them for a few hours, then once you’re bored of them, you can move on to the next victim, or walk with your own thoughts for a while. You also tend to see the same people who aren’t in your group most days too. We met this great older guy from Australia and an American dude who’d been walking solo for three weeks. You say ‘buen camino’ as a greeting to people you pass and everyone replies or has a chat with you – I live in London, this is alien.

Can you hike the Camino de Santiago on your own? 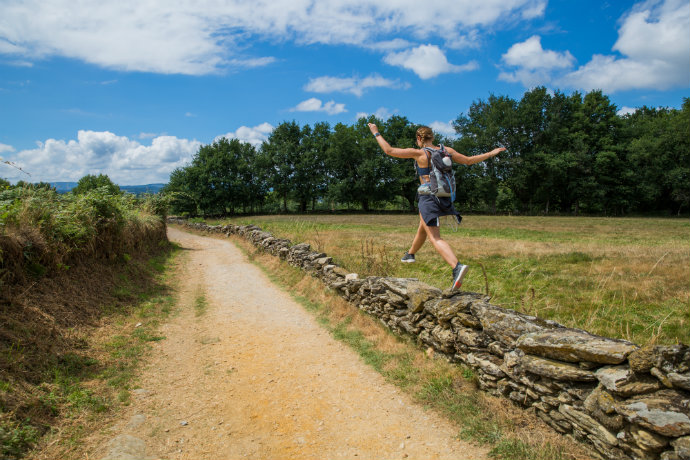 Cat being a springy bugger

You certainly can. There were plenty of people hiking with big backpacks and bedding down in hostel dorms for the night. The advantage of going with a company though, is that you get your bags transported, your hotels booked, and a guide who tells you what you’re looking at and takes you to the best restaurants hidden in the back of a bar down a suburban street.

How did you feel at the end? 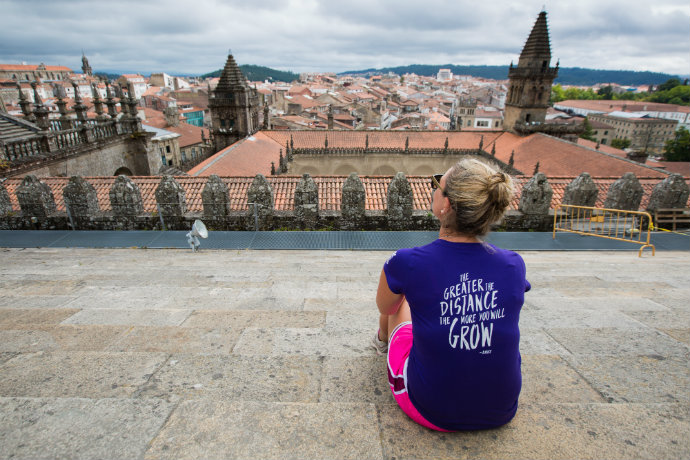 Casey up on the roof

Drunk! We finished in the city of Santiago, having a big lunch and some of that Galician wine I mentioned just outside the city walls before walking the last km to the cathedral where the square was full of celebrating hikers. Our guide had organised a special tour where we got to go onto the actual roof of the cathedral – built out of stone so the monks could go up there, apparently there used to be a bellringer with chickens who lived on the roof too  – for views across the old town.

After we got our certificates, we got dolled up and went to the best restaurant I’ve been to in a long time. Abastos, a tiny modern Spanish restaurant in an old fruit and veg shop by the market, where we had a five-course tasting menu complete with wines for each course. Then, as Sacha was getting married the week we returned, we went to a rock bar for the world’s biggest gins and threw her an impromptu hen do.

Got told off for by the receptionist for being too loud when we finally rolled back to the hotel – see, not too dissimilar to a school trip after all.

And Now For the Best Bit…

Fancy doing a G Adventures trip yourself? We’ve got a competition and a 15% discount below. You are very welcome. 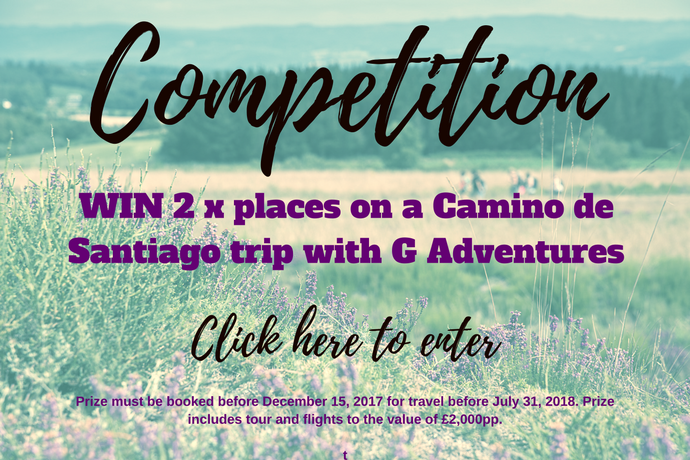 The Camino de Santiago trip I went on was supported by G Adventures, however all opinions are our own and we only work with brands we love! An eight-day Walk the Camino de Santiago tour is priced from £1,149pp, travelling from Lugo to Santiago de Compostela. Trip includes seven nights in hotels, seven breakfasts, transport and a chief experience officer (CEO) throughout. Prices do not include flights. For more information or to book, please visit www.gadventures.co.uk

Screw you cold weather, we’re getting out and about and keeping fit with mousdashes, glitzy hula hooping, trail duathlons, pop-up yoga and more. Know…