Earlier this year year we ran a competition to win a place in the Whole Foods Market WomenOnly Run. The lovely Jen Slater won, and here’s what she thought. (Ps, sorry for the late posting this got lost in the chaos of our inboxes for a while!) 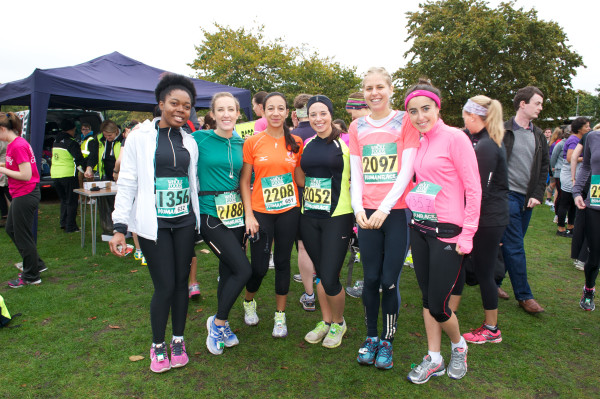 At the start line, Jen is second from left in green

Temptation is a terrible thing. It leaves you eating cereal for every meal after buying another pair of trainers, or with a whole Sunday spent staring at your porcelain bowl after too much gin. Generally if you give in to it, you’re going to end up feeling pretty bad. So then, on a 15k course with not one but two bailout points, I was going to have to stay strong to finish my longest ever race and avoid the guilt of cutting it short.

Luckily, there was plenty of support at the Whole Foods Market WomenOnly Run. The exclusion of men, although unfair in some people’s eyes, seems to create a more relaxed and friendly race atmosphere. One where first-timers feel more comfortable to test their legs, and speedier runners can go for the win without the distraction of casual sexism. Of course there’s still a competitive edge but it seems that everyone wills you to do well. As a group we were in Richmond Park to prove our overall awesome-ness and, in my eyes, this made us a very large yet perfectly formed team.

There were three distances on offer: 5, 10 and 15k. The whole ‘team’ ran through the lumpy 5k route – together soaking in the scenery, cursing ‘undulations’ and admiring those multi-taskers who breezed past while pushing buggies! Armed with a Garmin hired from race registration (and a crash course in how to start the damn thing) I was feeling up for a challenge. But not wanting to burn out of fuel early, I kept one eye on the pace (I was aiming for sub 90 minutes) while chatting through the park.

As we approached the fifth kilometer, my companions called me speedy (!) and I was waved on my way. This little ego boost kept me running past the event village, where our 5k team mates were congratulated on finishing and I continued onto the next 5k loop. So far, so good. The first bailout point was avoided, even though the buzz of the event village was enticing.

The next part of the course wound round the park so that you came back on yourself quite a lot. Watching all the people ahead of you run past can be demoralising but with so many familiar faces there that day, it turned into a bit of a Where’s Wally game. Each face I spotted was rewarded with a high-five, a shout of encouragement or a cheesy grin (to disguise a tired grimace). I even started to look forward to the two-way traffic.

What I didn’t enjoy, however,  were the sharp turns that sent you back from where you came. They completely stopped my rhythm so I had to gee myself up again once I’d negotiated the cone. I obviously wasn’t the only one, as I saw girl get round the cone only to stop and let me pass. I knew how she was feeling, I wanted to stop too! So with a firm “come on” I bullied her back to a running pace, mainly so I wasn’t tempted to join her but she seemed grateful for the push.

Cheers of encouragement from the always enthusiastic marshals saw everyone round the wiggly route and pulled us up the long, slow hill at the 10km mark. But here I found temptation – tiredness was kicking in and straight ahead was the inflatable finish line. I’d still get a time for 10k, a medal, a goody bag. Then a fellow 15k-er ran past:

Proud of not cutting short my first 15k (and finishing it in 1:28:36, well within my target), the temptation of the goodie bag proved too much for me. As the event was sponsored by Whole Foods, it was expected that a delicious haul would be up for grabs – they didn’t disappoint! I dived straight in as we gathered to cheer through the rest of the ‘team’. 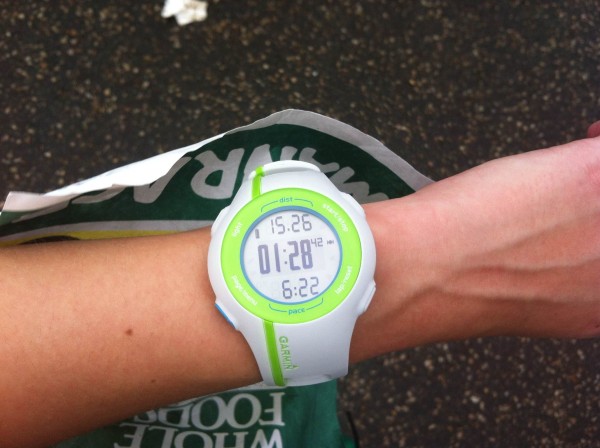 To find out more about next year’s race, click here

Thank you to Zoe Meskell and her brilliant “paparazzi mum” for the race photos. 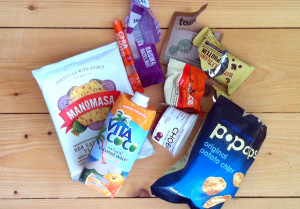 She had a bad 20 miler last weekend but Lorna’s thinking positive and making the last four weeks of training count. After all, if…