Four-time World Ironman Champion, undefeated in all 13 of her ironman distance races, a fierce campaigner for equality for women in sport… it’s fair to say Chrissie Wellington is an absolute hero.

So when we heard she was doing a training run and q&a in Hyde Park, ahead of the Pruhealth World Triathlon Grand Final (11-15 September) we were there like a shot. And we have to say, she was amazing! She’s so chatty, friendly and passionate about sport it’s infectious – and that smile is just as humongous in real life. She had so much good advice for all the triathletes there it was mind blowing. While we spent most of the time being a little bit star struck, we still managed to jot down a few of her pearls of wisdom. Tell you what, Chrissie Wellington is ace! 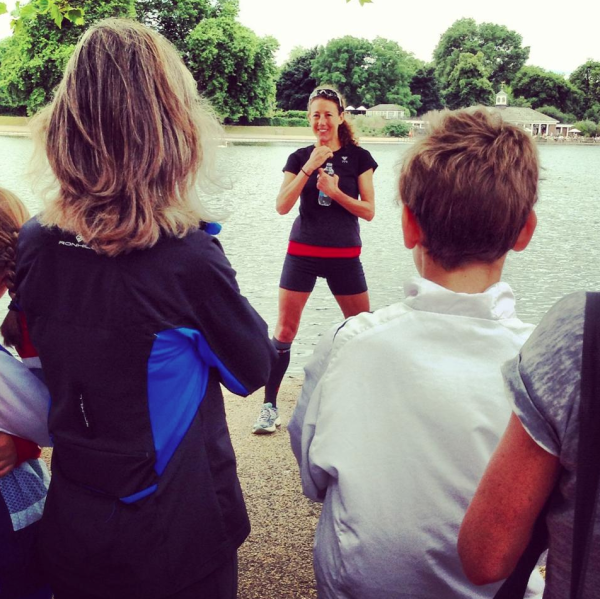 Strength training took me from a 3-hour marathon to a 2.44 marathon. Strength work doesn’t need to take long and you don’t need to do it in a gym – in fact I only lifted weights when I did squats. I mainly targeted my hamstrings, glutes and core through functional and conditioning exercises, making me strong enough to run even splits. The exercises that will help you are very individual though, I’d speak to a coach or trainer to see what you need to work on.

My first coach at Battersea track in London used to make us do a headstand when we got a stitch. I think most people go with a period of walking though.

Retirement isn’t easy psychologically. (Chrissie retired from competing professionally in 2012) I used to train 4-6 hours a day and trying to wean myself off has been difficult. The biggest challenge has been learning to rest, relax and be normal again. I’ve been setting myself challenges that aren’t physical, like learning to paint.

I’m a big advocate of women in sport and I’ll use whatever platform I have to try and raise the profile. I’m working with the Women’s Sport Trust campaigning to get a women’s race at the Tour de France. And no, I’m not a very technical cyclist so I probably wouldn’t compete. I’ve also been heading up a Junior Series of parkrun for 4-14 year olds. I want to inspire everyone to get involved with sport.

My racing strategy is to go as hard as I can for as long as I can. Ultimately, don’t worry about what everyone else is doing, you’ve trained at a pace and that’s what your body will do.

Remember, recovery is a training session too. Sometimes it’s better to drop a session and have a rest or your body will never get stronger. My racing improved through a reduction in training volume. Quality is much more important than quantity. When you’re writing a training plan, always plan in your rest too.

I’m very driven, determined and fiercely competitive. I always want to do my very best whether that’s washing the dishes or racing.

I never need to psych myself up before a race, in fact I try to calm down. I withdraw and listen to songs that are personal to me and make me feel confident. I practice visualisation and deep breathing. I don’t worry about pre-race nerves. They’re natural, everyone gets them and they soon dissipate after the gun goes.

When I won the Ironman World Championships in 2011 I knew I was the best athlete I could have been. I knew that was the ultimate challenge (Chrissie was nursing bad injuries including a torn pectoral muscle after a bike crash two weeks previously). It liberated me and I felt it was time to move on.

If you have the time to do the training and are prepared to commit to it then I have no doubt that most fit and healthy people could do an ironman. Joining a triathlon club is a great idea as there’s a huge network of support. The UK has the most concentrated population of triathlon clubs – around 600 – so we’re very lucky.

I think I have a 2.30 marathon in me. Maybe one day I’ll train to just run a marathon. There’s always that pressure to do well though. For now, I’m just loving life.

Looking for a last-minute ski holiday? Guest blogger Rachael Bull tells us why now’s a great time to go and how lessons with Snoworks…