Hot yoga, a 5k run through the streets of London and an indoor cycling session, that’s how BoomCycle do their UrbanTri

The popularity of triathlon races has increased an astonishing amount over the last few years; last year saw 1207 events take place across the UK, in comparison to 803 back in 2009. But for those based in London who perhaps don’t fancy a journey to plunge into a cold lake, The UrbanTri has a solution. Yotopia, Sweatshop and BOOM Cycle have teamed up to offer an alternative race, consisting of hot yoga, running and indoor cycling, taking place on the first Sunday of every month. It’s worth noting that if you’re totally new to any of these activities, it’s best to try to get a bit of practice in before taking on an UrbanTri.

First, you head bright and early to Yotopia, where you drop off your bags (which will be magically transported to BOOM Cycle) and enjoy 45 minutes of hot yoga, relaxing you and heating and stretching out your muscles ready for the rest of the day’s activities. Yoga mats, towels and water are all provided – despite it only being 45 minutes, you will still sweat a lot! – and the class hits just the right point between being challenging enough to make you feel like you’ve done something, but light enough so you can still get up and run afterwards. 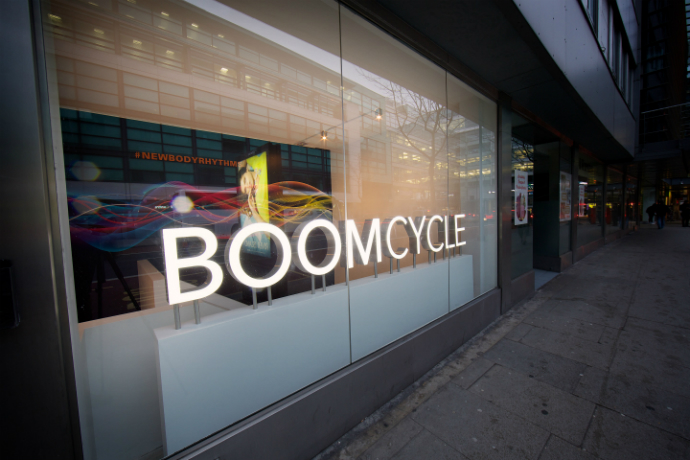 And that’s what you do – having put on your trainers and maybe another layer (chances are you’ll at least want a T-shirt to run in after being in a very warm room), a team from Sweatshop will take you out on a 5k run around the city, with members firmly stationed at the front, middle and back of the running group, so there’s basically no chance of getting lost. Our route took us from Covent Garden, over Embankment bridge, along the South bank (where there was even a little station giving out more water), then up past the Holborn viaduct to BOOM Cycle. Once there, you head into one of the dark, candle-lit rooms where there’ll no doubt be pumping music ready for you to take on an 8-mile cycle, with the help of a BOOM instructor and some, frankly, bangin’ tunes.

I’ll be honest here, by the time I made it to BOOM I was sort of ready for a little rest. I’d set off too quickly on the run, worried I’d be left at the back, I didn’t drink enough of the water id been given, and by the time I’d got comfy on the saddle of my bike, I was pouring with sweat. Any time our instructor told us to get up out of the seat, I gave it a go, but my legs said ‘no’ and I had to sit down again and just pedal normally. But this soon passed – either because of a couple of Nineties club classics that came on, or because everyone else taking on the task was so enthusiastic that it rubbed off – and I accidentally ended up cycling way further than the required 8 miles – a lot of people did.

As I left, sipping a well-deserved green protein smoothie that BOOM kindly gave all UrbanTri-ers for free – I was undoubtedly proud of myself. I’ve never done a ‘real’ triathlon – and perhaps those who have might find this one easy – but I’d find it difficult to believe that anyone could manage not to find it fun.

Ealing Half landed reader Kate a 1h 39 PB, a shiny medal and a weird laminated drawing of a pair of trainers but did it…