Did you get a big fat Elvis on your doorstep earlier this month? If, unlike us smug buggers, you didn’t get in to the Virgin London Marathon, there are plenty of other spring races to conquer.

Don’t think you’ll be able to raise the £2,000+ required to get most VLM charity places? Try one of these spring marathons instead. If you’ve already run any of the races below we’d love to hear what you thought, and if you know of any great races we’ve missed, don’t keep them to yourself, tell us in the comments box.

A fast and mainly flat course along the traffic-free promenade. Dodge drag queens and treat yourself to fish and chips at the Pleasure Beach when you finish. Only £28 if you enter before 31 Jan 2013. 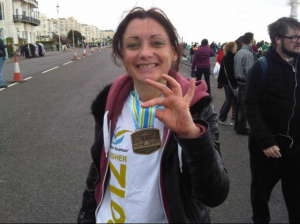 Since it launched three years ago, Brighton has become massively popular – 2013 sold out almost immediately. Charities have much more achievable fund-raising targets than London so if you want to run for a good cause there are plenty of places – official charity Scope asks for £400 minimum sponsorship. (This was my first marathon last year – see deeply unflattering pic above – and I bloody loved it, apart from the lonely, windy bit around the Power Station at about mile 20, Charlotte x.)

A new route for 2013 means Manchester is now the flattest course in the UK with only 55 metres of gain across the whole course. Good for PBs. The race village is at Manchester United Football Ground, maybe you’ll spot Rooney or something. 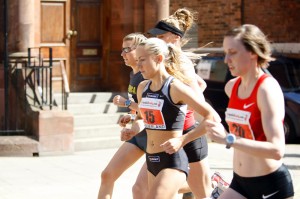 Now in its second year, this race has great views along the coast and, if it’s anything like Newcastle’s Great North Run, the locals will be out en mass to provide support along the route. The Sunderland 10k is on the same day, so if you change your mind… 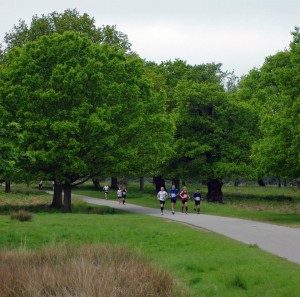 A small but beautiful marathon covering three laps of Richmond Park (the first lap differs from the following two). Not great for PBs as the route is quite hilly and includes running on grass and trails, but if you’re after an enjoyable run surrounded by the infamous Richmond deer and perhaps that dog Fenton, who enjoyed 15 mins of YouTube fame last year, it’s lovely.

Taking in most areas of the city, this is a great way to explore Belfast. Entries don’t close until 5 April and you can enter until 19 April for a £20 late fee, so if you’re unsure whether you’ll be able to complete the training this is a good one. It’s also on Bank Holiday Monday, which means an extra day to prepare/be jealous of those celebrating the long weekend.

One of the flattest, fastest and most popular courses in the UK, the race starts in the city centre and winds down towards the sea. Part of Edinburgh Marathon Festival, with a weekend of races including 10k, 5k, half marathon and marathon relays, there’s a great party atmosphere. Due to the later date it can be quite warm – last year was around 30 degrees, yep, even in Scotland. Usually a sell-out, enter early.

Of course that’s not all the UK spring marathons out there, there’s the challenging Sussex Marathon on 7 April, Milton Keynes, the Shakespeare Marathon (to PB or not PB) and many more. Marathon Runner’s Diary has listings of marathons small and large and runnersworld.co.uk is great for finding out how other runners rated races.

If you didn’t get in to London and none of the other UK marathons float your boat, sod it, why not use it as an excuse to go abroad? Run-loving blogger Laura (http://lifelauralondon.tumblr.com/ ) is a big fan of the old runcation:

“Entering a race and building your holiday around it can be a great way to see a city. I ran the Monte Carlo 10k and spent a week in the South of France, and my husband and I even included the Paris Versailles run in our honeymoon.” 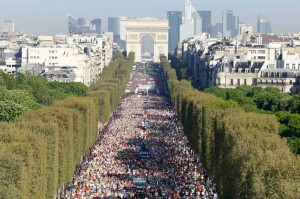 Paris is the most popular overseas alternative to London. It’s easy and cheap to get to, you run past some beautiful Parisian landmarks including the Eiffel Tower and Notre Dame, plus, last year the race pack included this total gem of a translation! (Bottom right, ‘Don’t Forget’ column.) 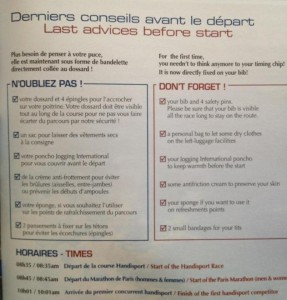 PS. Look out for our marathon training blogs, starting in December.

So for the last few months my efforts at blogging have been pretty much non-existent. I’ve been crazy busy and knackered. Here’s the lowdown…