Launched this month, adidas Runners is the newest free running club to hit London town, but is it any cop?

One of the best things about running – aside from exploring new places and getting filthy muddy when it’s wet – is the fact that you can just go out and do it on your own, pretty much whenever or wherever you fancy.

When it comes to getting better though, well that’s not quite as easy to do solo. Yes, you’ll improve up to a point, but you’re never going to push yourself as hard as you would when running with others (everyone’s a bit competitive after all). And you’re not going to pick up the tips and drills you would when training with a coach either.

That’s why adidas Runners is a bit of a winner. While many free running clubs focus on covering specific distances, adidas Runners, which also has clubs across Europe, is all about the coached drills. The twice-weekly sessions are split into four-week blocks (don’t worry, you can join at any point in the cycle) and cater for all abilities from beginner to pro.

The reason for these four-week blocks? According to James Poole, an adidas Runners captain, the weekly sessions are built around a classic mesocycle (a phase in a training plan).

“There are three weeks of harder sessions and then an easy week,” he says. “The structured tempo sessions are designed to add an injection of pace into your running routine, something many runners neglect. The easy week allows the body to adapt to the training stimuli and rebuild stronger.” 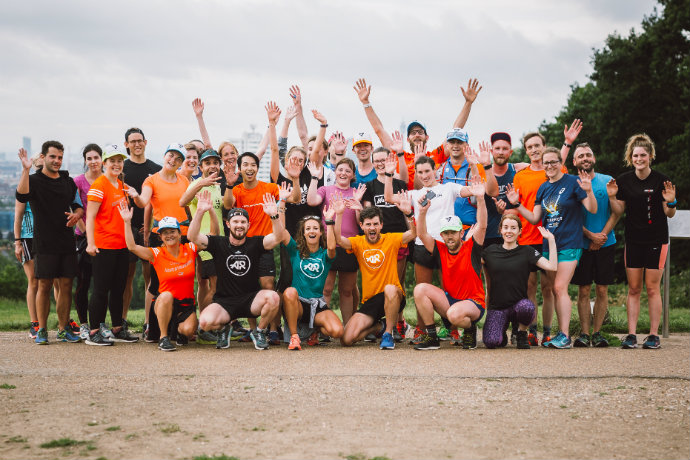 Friday’s run captains James and Claudia, in the middle wearing green and orange

And what kind of results can you expect? “The sessions are designed to work alongside a runner’s own easier runs or cross training,” says James. “Over a longer period, we would expect people to see improvements in their running – either through new PBs or simply finding more enjoyment in running. The aim is that each person, whatever their standard, ends our runs motivated and feeling like they are becoming a better runner.”

Sounds good, but what’s an adidas Runners session actually like?

Let’s get this out here, I really, really hate drills, I hate intervals, I hate hill sprints … anything that makes me run fast, go purple, feel a burn in my thighs, or taste blood basically. I know this means I need to do it more, particularly as my running is pants at the moment and I want get it back up to scratch. So I faced the early morning start and went along to Adidas Runners this Friday.

The Facebook status had said it was something called ‘cruise intervals’ – which sounded pretty cruisey – so I thought this would be a nice gentle session to break me in. You already know I was wrong, right? 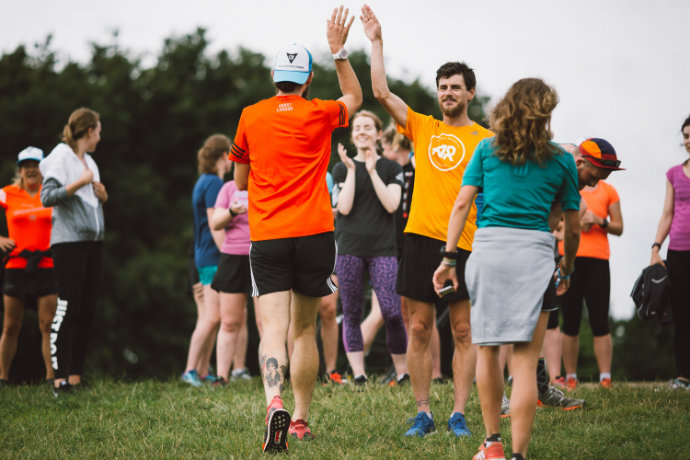 Meeting just near Kings Cross, the session starts promptly at 7am so if you want to use the bag drop – located in a monster of an adidas truck – or try on some adidas Ultra Boost, which are available to test on the run, it’s advisable to get there 10 minutes early. Or, if you’re me and late for everything, turn up just after 7, throw your stuff in the truck and don’t hear a word of the pre-session briefing.

Not hearing much of the briefing was a bit of a blessing actually, it gave me another 20 minutes of blissful ignorance about exactly how un-cruisey cruise intervals are. So I got to enjoy the pleasant jog over to Granary Square for a dynamic warm up, I had fun doing the mass group relay in the morning sun (there were about 14 in each group so no one could tell how fast or not fast you were going) and then, well then I found out what cruise intervals actually are.

Now I already know Friday’s run captains Claudia and James from AdventRunning. I know they are fantastic people and enthusiastic coaches, I know that their love of running is contagious … I know all of this but, still, for around 25 minutes on Friday morning, I thought they were complete and utter bastards.

The main set was those intervals, basically ditching the watch and apps and running for feel. We did repeats along the canal of 800m at an effort level 8-9 (when you’re running so hard you can only blurt out one word answers to a question, usually ‘shit’) and a still pretty pacey recovery at around level 6 (when you can just about manage a sentence, something like ‘why am I not still in bed?!). The idea was to build aerobic endurance and work on pacing without a watch.

All happy now it’s over

I was really slow, it hurt my chest, I’m not going to pretend I liked it… but all the runners were really supportive of each other, cheering you on as they passed you along the canal and once it was over, I did feel pretty amazing.

After we’d finished, we took a slow jog back to the van for a free drink and a cereal bar in the sunshine. By then I’d forgotten about the pain and I just felt that glorious sense of smug you get from an early morning workout. As I was working from home I even had a little snooze when I got back.

All in all, a tremendous way to kick off a Friday. I’m back next week, you should totally come.

You can find out more about adidas Runners and register for sessions at adidas.co.uk/adidasrunners

Ps. James and Claudia, there are a number of definitions for the word cruise, my particular favourite is this one:

Cruise: To go or move along, especially in an unhurried or unconcerned fashion.